Scientists from the German Cancer Research Center (DKFZ) have discovered how RNA molecules regulate the structure of the nucleolus and drive the synthesis of the cellular machinery needed for protein production. When cells grow and divide rapidly, they need to run up the production of proteins. The cellular machinery for this task is synthesized and assembled in a special compartment of the cell nucleus called the nucleolus. The nucleolus constantly adapts its shape if the cell needs to produce more or less protein. Accordingly, fast dividing tumor cells often have bigger nucleoli. 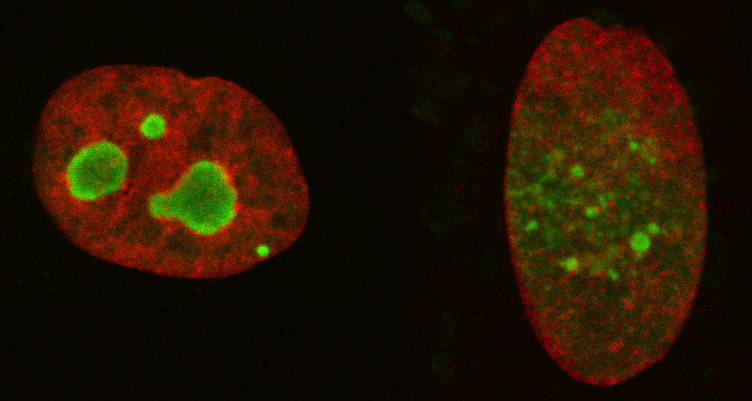 Scientists from the DKFZ have now found a novel mechanism that sheds light on how the nucleolus is able to change its structure as needed. Cells have to continually tune their metabolism in response to signals from their environment. To cope with this need, the nucleolus has a very dynamic structure. It becomes bigger if cells’ metabolism is high, as it is the case for cancer cells that grow and spread very rapidly. On the other hand, structural aberrations and decreased activity of the nucleolus are found in starving cells or in association with heart disease and neurological disorders. Thus, it reflects the cell’s condition and acts as a central hub for integrating and responding to external and cellular signals. In extreme cases, stress stimuli applied to the nucleolus can lead to cell death. This characteristic is currently exploited to develop therapeutic treatments, which target the nucleolus, to block highly proliferating cancer cells. However, in order to increase chances of succeeding in that direction, a better knowledge of the processes governing nucleolus organization and function is necessary.

The DKFZ scientists observed that inhibiting the production of RNAs coding for proteins, the messenger RNAs, completely shattered the nucleolus into small pieces. By sequencing the RNA content of nucleoli, they identified parts of messenger RNAs that were needed for keeping the structure intact. This RNA type, called aluRNA, originated from what was previously thought to be a useless by-product of messenger RNA synthesis. The aluRNA binds to certain proteins and, like a glue, keeps together the parts of the genome that associate within the nucleolus.

In the experiments it appears that the nucleolus behaves like a drop of oil in water. “If we degrade the aluRNA in the cell, the nucleolus falls apart like oil patches that disperse into small droplets when shaking a vinaigrette”, said Maïwen Caudron-Herger, the lead author of the study from the group of Karsten Rippe, who conducted the work together with the team of Ingrid Grummt at the DKFZ. Thus, the aluRNAs are needed for the droplets to fuse together and to form larger and properly functional nucleolus.

A detailed understanding of the mechanisms that govern nucleolus assembly, disassembly and function has important implications for explaining its disease-related deregulation and developing therapeutic treatments. One question that the DKFZ researchers want to address in their future work is the function of aluRNA for the abnormally high nucleolus activity of rapidly dividing cancer cells that often have extra nucleoli.