Alzheimer’s disease (AD) is a progressive neurodegenerative disorder of the brain and the most common form of dementia among the elderly. The single-cell RNA-sequencing (scRNA-Seq) and single-nucleus RNA-sequencing (snRNA-Seq) techniques are extremely useful for dissecting the function/dysfunction of highly heterogeneous cells in the brain at the single-cell level, and the corresponding data analyses can significantly improve our understanding of why particular cells are vulnerable in AD.

Researchers at The Ohio State University developed an integrated database named scREAD (single-cell RNA-Seq database for Alzheimer’s Disease), which is the first database dedicated to the management of all the existing scRNA-Seq and snRNA-Seq datasets from human postmortem brain tissue with AD and mouse models with AD pathology. scREAD provides comprehensive analysis results for 55 datasets from eight brain regions, including control atlas construction, cell type prediction, identification of differentially expressed genes, and identification of cell-type-specific regulons. 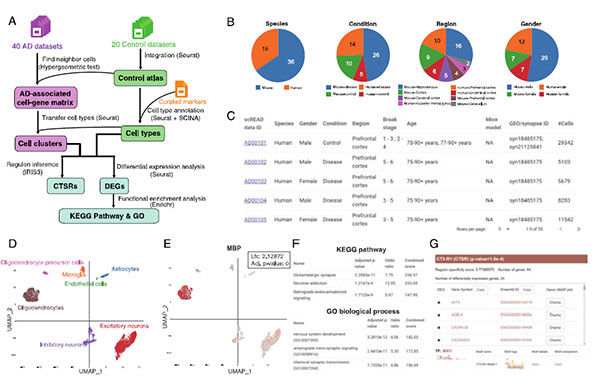 (A) Backend workflow of scREAD; (B) General statistical distribution of all the 55 datasets; (C) General information table on the homepage; (D) UMAP plot colored by cell type on an AD disease dataset (AD00103); (E) UMAP plot of expression distribution of oligodendrocyte marker gene MBP in the same dataset; (F) The functional enrichment analysis of selected DEGs; (G) The details of the top CTSR of cell type three.

Availability: scREAD is a one-stop and user-friendly interface and freely available at https://bmbls.bmi.osumc.edu/scread/. The backend workflow can be downloaded from https://github.com/OSU-BMBL/scread/tree/master/script, to enable more discovery-driven analyses. 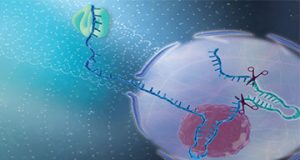