By mapping out more than 100,000 immune cells in patients with Crohn’s disease, Mount Sinai researchers have discovered a signature of cells that are involved in a type of the disease that does not respond to treatment, according to a study published in Cell in August. The discovery opens the door to identifying biomarkers and tailoring therapeutic options for patients.

The study analyzed biopsy samples of inflamed and uninflamed Crohn’s disease lesions on small intestine tissue as soon as it was removed from patients. Researchers used single-cell RNA sequencing and CyTOF technology to look into the intestinal lesions in real time on a single- cellular level, identifying the immune cells and circulating blood cells and their interaction in and around the lesion, and mapping a landscape of thousands of cells in the lesion. 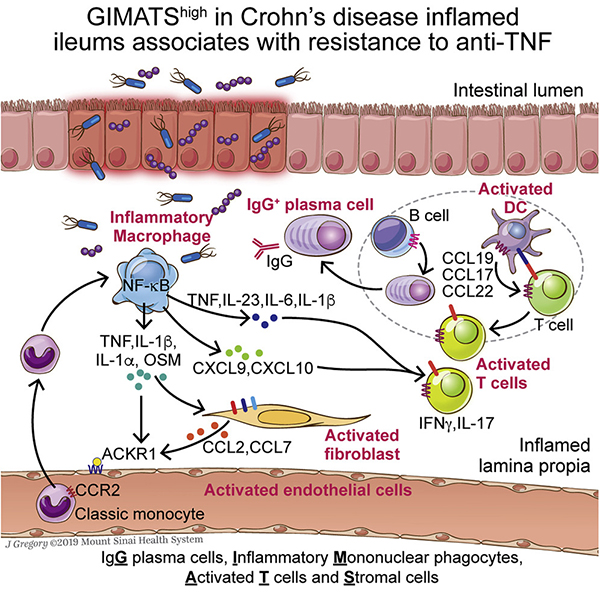 The analysis found a signature of precise cell types, never previously identified, that correlates with a patient’s resistance to the standard therapy for Crohn’s disease, an anti-inflammatory drug called a TNF inhibitor. A TNF inhibitor is the major agent given to patients with moderate to severe Crohn’s disease, but about 40 percent of patients who take the inhibitor end up either not responding to it or having their Crohn’s worsen.

Having a signature to identify patients who will fail on the inhibitor is helpful to avoid surgery and complications. Based on this study’s results, researchers have already developed a clinical trial that will test whether it’s possible to find the signature in a blood test when a patient is diagnosed with inflammatory bowel disease. If so, doctors could avoid using a TNF inhibitor and instead use other biologics that will work for that patient.

“We designed this study in a way that defines inflammation with unprecedented precision using immunology and computational biology to get a better understanding of this disease,” said co- corresponding author Judy H. Cho, MD, Senior Associate Dean for Precision Medicine, Director of The Charles Bronfman Institute for Personalized Medicine, Ward-Coleman Professor of Translational Genetics, and Professor of Medicine, and Genetics and Genomic Sciences, at the Icahn School of Medicine. “These results emphasize the limitations of current diagnostic assays and the potential for single-cell mapping tools to identify novel biomarkers for treatment response and tailored therapeutic opportunities.”

This study looked at four groups of patients and used single-cell analysis of one group to identify the signature. The researchers then overlaid the data from the single-cell analysis onto multiple, large datasets consisting of the other three groups of patients whose tissues had been analyzed and whose outcomes with the TNF inhibitor were known. Using an algorithm and computational biology, the researchers corroborated the signature identified from the single-cell sequence results in the multiple, independent groups with known treatment outcomes.