A new study aimed at explaining differential susceptibility to viral epidemics reveals that ancestry and associated genetic variation can explain population-level differences in the immune response to the flu virus and perhaps also to COVID-19.

Viruses are among the strongest sources of selection pressure in human evolution. However, before the modern era, widespread pandemics were likely rare. Instead, virus outbreaks were confined to regional populations. Thus, if past viral epidemics were geographically contained, they may have driven population divergence in responses to viral infection in pockets. While ancestry has been associated with differences in the responses to viruses, the molecular determinants of these variations remain unclear.

Here, to quantify variation in the response to influenza infection, researchers at the University of Chicago and the University of Minnesota used single-cell RNA sequencing of peripheral blood mononuclear cells infected with influenza A virus in vitro from individuals of European and African genetic ancestry. Infection led to gene signatures that diverged in a cell-type specific manner, correlated with ancestry. One clear exception they found to the overall pattern of genetic ancestry’s effects on immune response being cell-type specific was in the interferon (IFN) response following infection. Across all cell types, increased European ancestry was associated with a stronger type I IFN response shortly after influenza infection, which in turn predicted reduced virus levels at later time points. 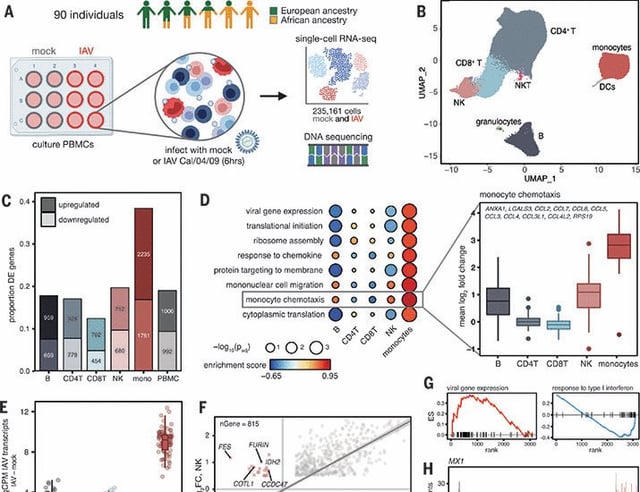 “Given the central role played by IFNs in conferring antiviral activity to host cells, our findings have potential clinical implications not only for influenza infection but also for other viruses, including SARS-CoV-2, for which the timing and magnitude of IFN-mediated antiviral responses are associated with disease progression and severity,” say the authors.

The study also showed that genes differentially expressed based on genetic ancestry are involved in responses to other single-stranded RNA viruses, including SARS-CoV-2 – a finding that could contribute to the observed differences between COVID-19 susceptibility between African Americans and European Americans.

Source – American Association for the Advancement of Science (AAAS)