scRNA-Seq reveals the surprising diversity of the fallopian tube

The fallopian tube is the site of fertilization, where once a month for the duration of a female’s post-pubescent, pre-menopausal life, an egg is moved from the ovary, ready for fertilization by a sperm cell.

A new study from Michigan Medicine researchers creates a detailed “atlas” of the various cell types and their gene activities within the highly specialized fallopian tube, paving the way for new research into infertility and other diseases affecting this organ, including some cancers.

Using tissue samples from four premenopausal women, Saher Sue Hammoud, Ph.D., and Jun Li, Ph.D. from the Department of Human Genetics led a team at U-M to analyze almost 60,000 cells by single-cell RNA sequencing. They used the data to characterize the diversity of cells that make up the fallopian tube, including both the lining of the tube (the epithelium) and the deeper stromal layer, consisting of immune, blood, muscle, and other cells.

Hammoud and Li are joined by Ariella Shikanov, Ph.D., of the Department of Biomedical Engineering, Erica Marsh, M.D., of the Department of Obstetrics and Gynecology, and team members Nicole Ulrich, M.D., Yu-chi Shen, Ph.D., and Qianyi Ma, Ph.D. Their project is part of the Human Cell Atlas Seed Networks, an international effort supported by the Chan-Zuckerberg Initiative to map all cells in the human body as a resource for better understanding health and disease.

Prior to their work, “it was known that there are about four epithelial cell types in the fallopian tube,” said Hammoud. “We were able to reveal a deeper level of heterogeneity within these cells.”

Specifically, they identified 10 epithelial cell subtypes, including four of the finger-like ciliated cells responsible for moving the egg through the fallopian tube’s three sections before and after fertilization.

The cells within the fallopian tube are ever changing, replenishing themselves over time and varying in number depending on a woman’s age, hormones, menstrual cycle, and in the presence of disease. By comparing cells from women with healthy fallopian tubes to two samples from women with a fallopian tube disease known as hydrosalpinx (conventionally known as a blocked fallopian tube), the researchers were able to pinpoint which cells increased in number, and which changed characteristics, such as a high degree of inflammation.

“Some of the cells are the cause of the disease state, and some others are the consequence; and now we know the patterns for individual cell types to figure out the molecular reasons for that pathology,” commented Li. 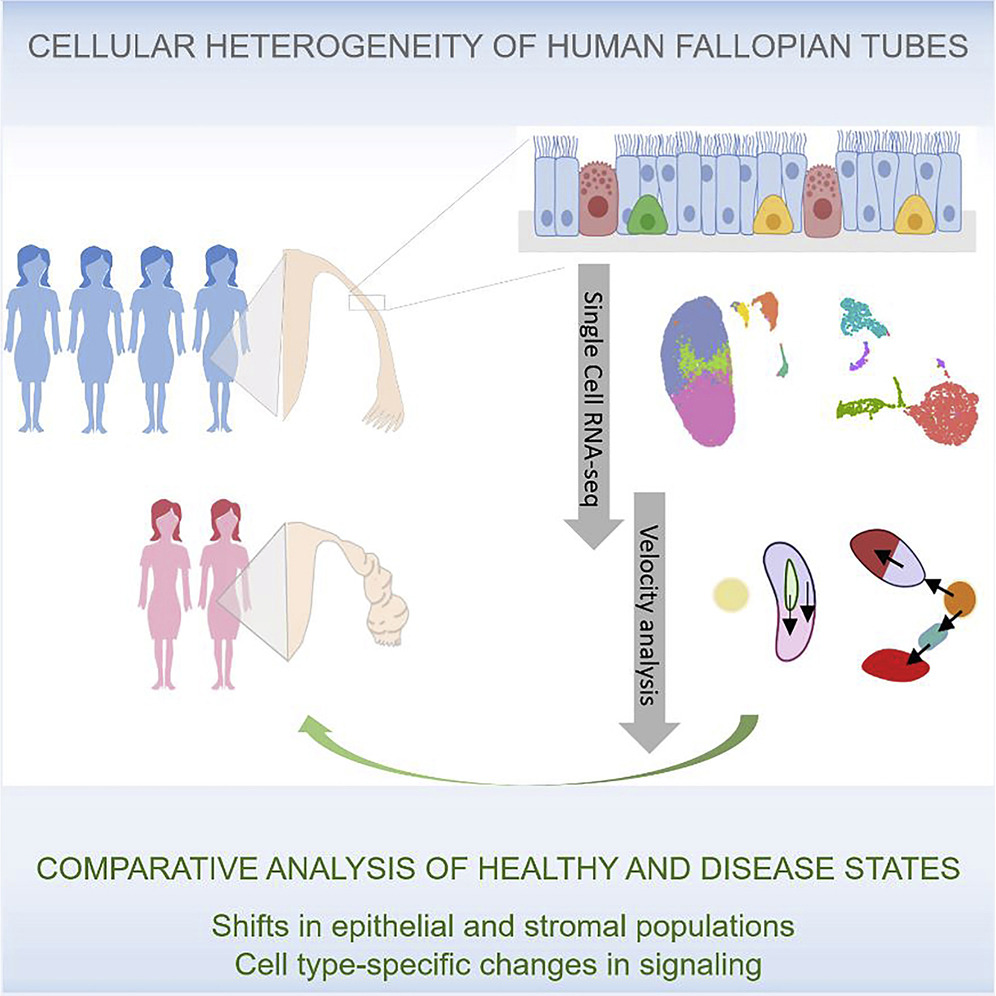 Precursor cells in the tube and cancer connection?

The team also found that some of the cell subtypes they defined in the fallopian tube may function as precursor cells, those that can regenerate multiple cell types in response to normal tissue turnover, or for repairing a damage.

One of the most surprising findings of the study, says Hammoud, was the discovery of cells with markers for epithelial-mesenchymal transition, also known as EMT, a process not previously associated with the fallopian tube, through which a cell can, under certain circumstances, become cancerous.

Ovarian cancer, it turns out, may be a misnomer. The new study adds to accumulating evidence that the root of ovarian cancer—the fifth leading cause of cancer death in women—may originate within the adjacent fallopian tube.

“The EMT process seems to be tightly regulated in the pre-menopausal woman,” she said. “One possible connection to cancer is that when there is misregulation in this population of cells in some unfortunate individuals, they may develop ovarian cancer. With EMT cells in the fallopian tube, you do have the predisposition right there.”

Additional insights came from the fallopian tube cells from women with hydrosalpinx, specifically, that the disease may lead to a type of scarring called fibrosis.

The implication is that for women who don’t want to have their tubes removed, “you could think about treating them with anti-fibrotic drugs such as the ones used to treat lung fibrosis as a way to save their tubes during reproductive age,” noted Hammoud.

Compared to past efforts, the study provides much more detailed information about cell types and functions in the tube for researchers interested in a host of questions about the normal female reproductive system. “This really is a basecamp to launch future studies,” says Li, including ones that look at the effects of age, the menstrual cycle, hormone therapy, and ancestral background on cellular diversity and disease pathology.