Map details the changes in gene activity that occur as the embryo develops and differentiates into different cell types. 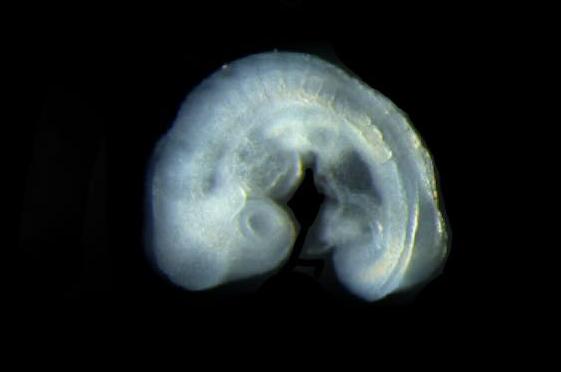 The researchers sequenced messenger RNA from about 150,000 embyronic mouse cells at key stages of development

Scientists have mapped out the key molecular changes that orchestrate how embryonic mouse cells differentiate into the diverse cell types that will ultimately form all the different tissues and organs of the adult animal.

This “roadmap” of mouse embryogenesis will help researchers understand the molecular programs that control how different specialized cell types emerge from less differentiated cells as an embryo grows and develops not only for mice, but also for humans, said Jay Shendure, professor of genome sciences at the University of Washington School of Medicine,  scientific director of  the Brotman Baty Institute for Precision Medicine and a Howard Hughes Medical Institute Investigator.

“We begin life as a one-cell zygote and that cell, in just a few weeks or months, divides and differentiates into hundreds of cell types,” Shendure noted. “So, the question is: How does that happen? What paths do cells take? What are the genes that shape those decisions?”

The researchers reported their findings today in the journal Nature Genetics.  Chengxiang Qiu, a computational biologist and doctoral student in the Shendure lab, was lead author of the paper.

To map out this process, Shendure and his colleagues drew on publicly available data collected from mouse studies that used a technique called single-cell RNA sequencing (scRNA-seq).

This technique allows scientists to identify and quantify the levels of different messenger RNA molecules within individual cells. Because these mRNA are copied from activated genes, their presence in a cell indicates which genes are active at a given point in time.

To supplement these data, the researchers also used scRNA-seq data they had generated from about 150,000 embryonic mouse cell nuclei sampled every two hours over a critical 24-hour period beginning on the eighth day of mouse embryonic development. 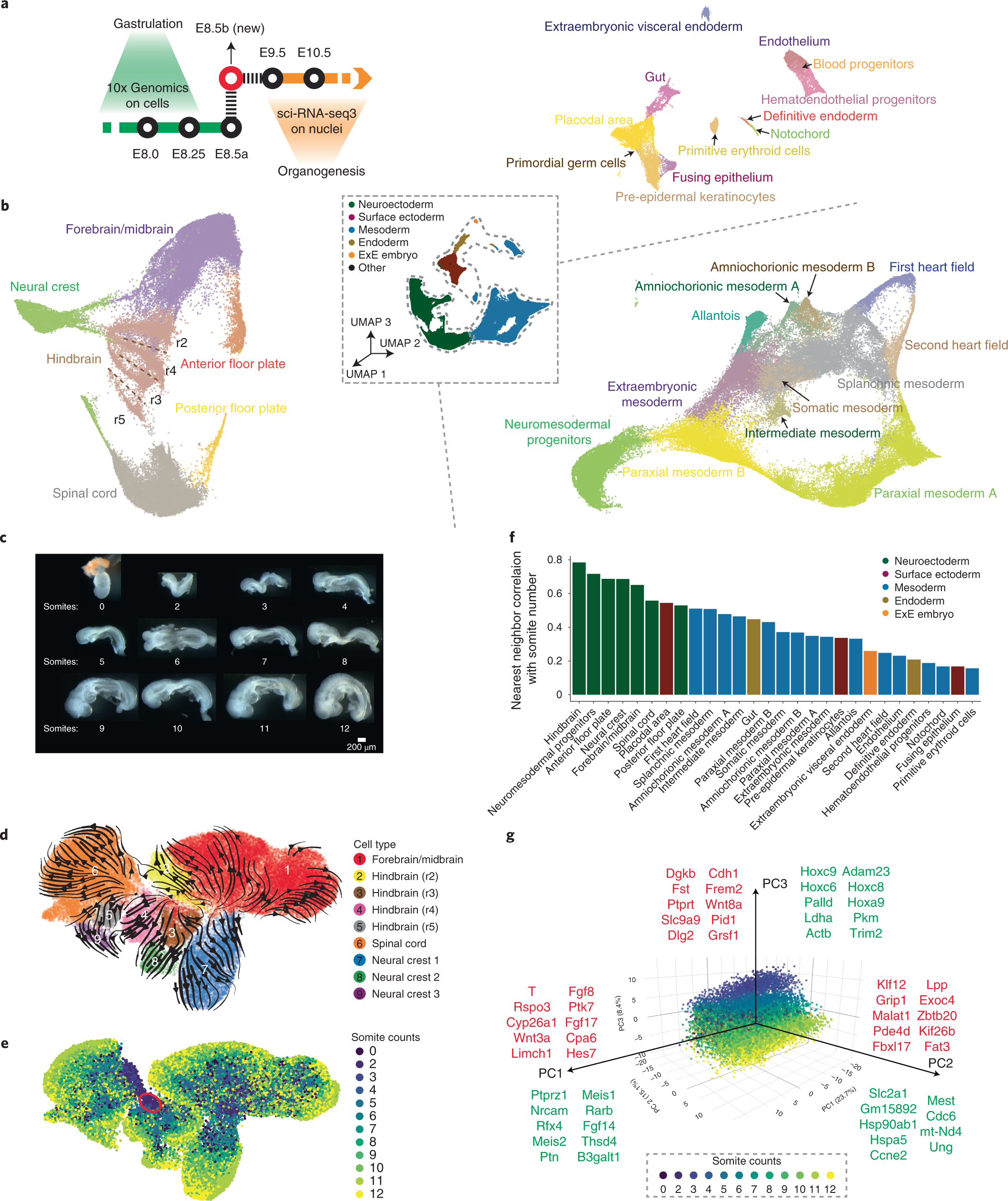 a, A new scRNA-seq dataset was generated from nuclei derived from individual E8.5 mouse embryos via an optimized sci-RNA-seq3 protocol to bridge existing data generated on E8.5 cells via 10x Genomics and E9.5 nuclei via sci-RNA-seq3.. b, 3D UMAP visualizations of the new E8.5 dataset (E8.5b). All nuclei colored by germ layer are shown in the center, along with separate embeddings of neuroectoderm (left), nonhematopoietic mesoderm (bottom right) and endoderm, extraembryonic and hematopoietic cell types (top right). c, Twelve mouse embryos, including a single primitive-streak-stage embryo and 11 embryos staged in 1-somite increments from 2 to 12 somites, were collected and their nuclei subjected to optimized sci-RNA-seq3. d, Re-embedded two-dimensional (2D) UMAP of cells annotated as forebrain, midbrain, hindbrain, spinal cord and neural crest. Arrows correspond to RNA velocity trends. e, The same UMAP as in d, colored by somite counts. The subset of cells from rhombomere 4 that appear to emerge the earliest are highlighted in red circles (Hoxa1+ and Hoxb1+). f, For each cell type with >100 profiled cells, we calculated the Pearson correlation coefficient between the somite number of each cell of that type and the average somite number of its five nearest neighbors in the global 3D UMAP embedding. Colors indicate germ layers. g, 3D visualization of the top three PCs of gene expression variation in NMPs, calculated on the basis of the 2,500 most highly variable genes. Cells are colored by the somite count of the originating embryo. Genes most strongly correlated (Pearson), either positively (red) or negatively (green), with each PC are listed. ExE, extraembryonic; r2–r5: rhombomeres 2–5.

Qiu combined these data, and after adjusting them to account for differences in the techniques used by different researchers, identified the states of the embryonic cells at 19 stages spanning from day 3.5 in the mouse embryonic development to day 13.5, when most of the key embryonic structures have appeared. In mice, gestation, from a single-cell zygote to a live-born pup, takes only 21 days.

The resulting map traces out the changes in gene activity as the cells develop and differentiate into different cell types. Of particular interest is the activity of genes for key regulatory proteins, called transcription factors, that orchestrate cell growth, development and function, said Qiu.