scRNA-Seq sheds light on why immunotherapy succeeds or fails

There have been many success stories for checkpoint blockade therapies both in preclinical models and in patients with cancer. But many questions remain about exactly how such immunotherapies elicit their response and what determines when and where checkpoint blockade therapy succeeds or fails at reinvigorating the immune system to eradicate cancer. A new study led by investigators from Brigham and Women’s Hospital in collaboration with colleagues at the Broad Institute examines the effects of checkpoint blockade therapies on different populations of T cells, a key class of immune cells in tumors. The team’s surprising results point to a population of T cells that have been overlooked in the past and led to the identification of a molecular factor that may be predictive of response to treatment. The investigators’ findings are published in Immunity.

“Our study takes advantage of the observation that there is great diversity in the T cells within tumors. When we looked at the effect of therapies on different cell populations, we were surprised and puzzled to find that even T cells that don’t express checkpoint inhibitors showed significant changes at the genetic level,” said co-corresponding author Ana Anderson, PhD, a scientist at the Brigham. “These are cells that have largely been ignored before. Our study broadens the focus of what checkpoint blockade therapy may be doing and how it mediates its effects.”

Anderson and colleagues leveraged modern technology to explore the effect of therapy on T cells across different cancers, capitalizing on computational methodologies and single-cell RNA-seq, a technique for measuring the output of thousands of genes from individual cells in a given population. The researchers took an iterative approach, allowing the data to point them toward interesting leads and then performing further testing in preclinical models of cancer. 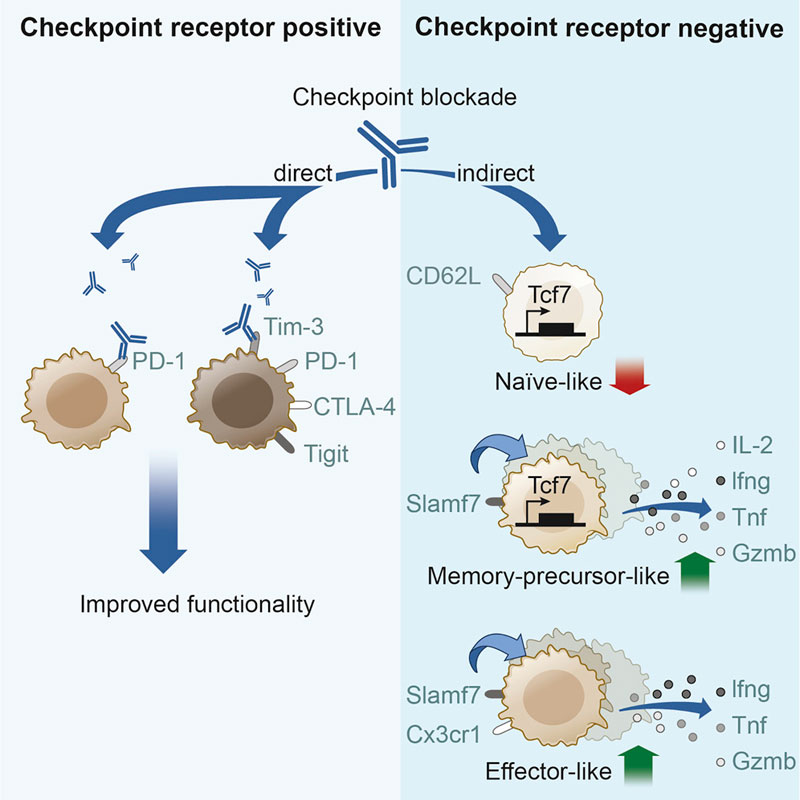 This approach led them to Tcf7, a transcription factor that is required for the maintenance and function of an immune cell population that is capable of memory. Through their experimental models, the team found that this factor was required for immune-based therapies to succeed.

Anderson notes that, to date, the field has been largely focused on fully matured, end-stage T cells that are equipped with checkpoint receptors such as PD1 or CTL4. In the early stages of activation, T cells don’t yet express these receptors, and yet, these nascent cells still show a response to the therapy. “We need to understand these early-stage T cells to shed light on how checkpoint blockade therapy works,” said Anderson. “Our study helps define an important immune cell population that responds to checkpoint blockade immunotherapy across different cancers and points to a critical factor in this therapy’s success. With further study, we may be able to define biomarkers to predict a patient’s response to therapy and identify which cells are most important to target with immunotherapy approaches.”