A Northwestern Engineering research team led by Professor Julius Lucks has uncovered a new understanding of how RNA molecules act as cellular ‘biosensors’ to monitor and respond to changes in the environment by controlling gene expression. The findings could impact the design of future RNA-specific therapeutics as well as new synthetic biology tools that measure the presence of toxins in the environment.

RNA molecules play a pivotal role in storing and propagating genetic information like DNA, as well as performing functions critical to living systems like proteins. At the core of its function is its ability to undergo origami-style folding into intricate shapes inside the cell.

Using high-throughput next-generation sequencing technology developed in his lab that chemically images the dynamic shapes RNAs fold into, Lucks found similarities in the folding tendencies among a family of RNA molecules, called riboswitches. Riboswitches act as natural biosensors to monitor the internal and external state of cells. When a riboswitch binds to a molecule, it changes its shape, causing a change in gene expression.

“These riboswitches have evolved to fold into very specific shapes so they can recognize other compounds, change their shape when they bind to them, and ultimately induce a change in gene expression,” said Lucks, associate chair and professor of chemical and biological engineering at the McCormick School of Engineering. “There’s been little studied about how exactly they can fold and adjust those shapes, especially since they do so before the RNAs are fully made. We learned that there is an evolutionary pressure on RNAs to not only fold into the final structure, but to have a pathway to do so similarly and efficiently.”A paper outlining the work, titled “A Ligand Gated Strand Displacement Mechanism for ZTP Riboswitch Transcription Control,” was published on October 21 in the journal Nature Chemical Biology. The study was also featured in the journal’s “News & Views” section.

Lucks served as the paper’s corresponding author, while Eric Strobel, a Beckman Postdoctoral Fellow in Lucks’s group, served as the study’s lead author. PhD students Katherine Berman and Luyi Cheng, and visiting predoctoral scholar Paul Carlson, all from the Lucks Lab, also contributed to the research.

The study builds on past research in which Lucks and his team developed a platform that provides super high-resolution representations of RNA shape changing as the RNAs are synthesized.

Previously, Lucks and his team used their high-resolution system to study how a riboswitch sensed the fluoride ion. In the Nature Chemical Biology paper, he applied the system to a riboswitch responsible for sensing a natural cellular alarmone molecule called ZTP, which Lucks said functions as an “alarm trigger” in cells.

Despite structural and functional differences between the riboswitches and their respective target compounds, Lucks discovered that in both instances the riboswitches followed the same folding pathway — the series of shapes the RNA molecule progresses through as it is synthesized. 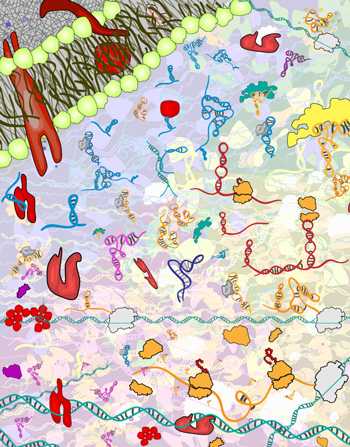 “Once RNAs are made, they immediately fold into a shape that recognizes the molecule. If the molecule is there, the shape locks in and preserves the structure,” Lucks said. “If the molecule isn’t present, the RNA unravels itself. We found that happened in both instances.“Whether you’re trying to make an origami crane or frog, the first several steps are pretty much the same,” he added. “While these RNAs look different, they’re amazingly similar when you break them down into their sequence of folding instructions. Finding links to these common features lays the groundwork for coding these principles as design elements for when we want to harness them for our own uses.”

Those uses could include future drug delivery strategies. While many therapeutics are designed to treat diseases caused by protein misfolding, such as Alzheimer’s or Parkinson’s, Lucks believes his lab’s work could inform efforts to treat diseases believed to be triggered at the RNA level, including spinal muscular atrophy, a neuromuscular disorder caused by the mis-splicing of the SMN gene.

“You may not only want to target the final structure of an RNA molecule, because they all fold in some sort of structure, but also the folding process to get into that structure,” he said.

The findings also represent a positive step toward harnessing RNA’s capability as a natural biosensor. Working with Northwestern’s Center for Synthetic Biology and Center for Water Research, Lucks and his lab are pursuing how riboswitches could be used within low-cost synthetic biology platforms to detect toxins in the environment, impacting areas like crop health and water quality.

“As we learn more about the architecture behind how RNAs work, we’ll seek to understand how to make them work better,” Lucks said. “Nature may have evolved to make them do one thing, but we want them to work for us faster or more sensitively. We’re still learning how to do that, but we’re nearing that level of detail where we can truly design around these principles.”