Depth of coverage calculation is an important and computationally intensive preprocessing step in a variety of next-generation sequencing pipelines, including the analysis of RNA-sequencing data, detection of copy number variants, or quality control procedures.

Building upon big data technologies, researchers from the Warsaw University of Technology have developed SeQuiLa-cov, an extension to the recently released SeQuiLa platform, which provides efficient depth of coverage calculations, reaching >100× speedup over the state-of-the-art tools. The performance and scalability of this solution allow for exome and genome-wide calculations running locally or on a cluster while hiding the complexity of the distributed computing with Structured Query Language Application Programming Interface. 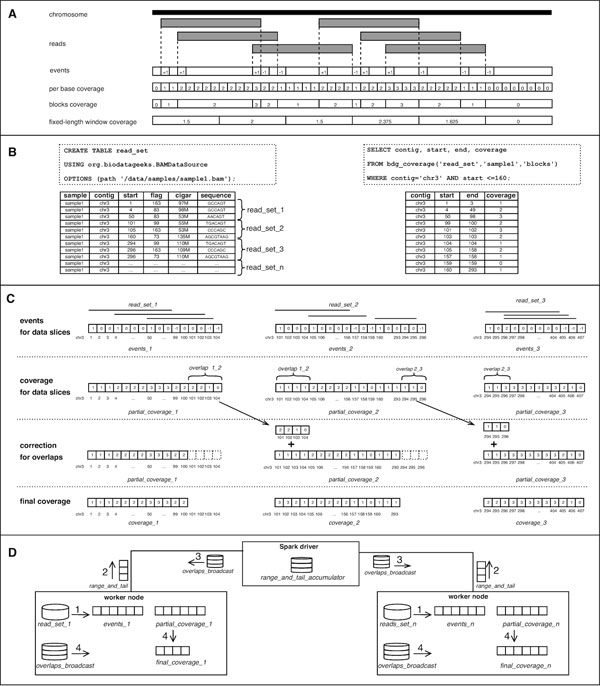 (A) General concept of events-based algorithm for depth of coverage calculation. Given a genomic chromosome and a set of aligned sequencing reads, the algorithm allocates “events” vector. Subsequently, it iterates the list of reads and increments/decrements by 1 the values of the events vector at the indexes corresponding to start/end positions of each read. The depth of coverage for a genomic locus is calculated using the cumulative sum of all elements in the events vector preceding the specified position. The algorithm may produce 3 typically used coverage types: (i) per-base coverage, which includes the coverage value for each genomic position separately, (ii) blocks, which lists adjacent positions with equal coverage values merged into a single interval, and (iii) fixed-length windows coverage, which generates a set of equal-size, non-overlapping and tiling genomic ranges and outputs the arithmetic mean of base coverage values for each region. (B) Provided SQL API to interact with NGS data. The first statement creates a relational table read_set over compressed BAM files using the provided custom Data Source, whereas the second statement demonstrates the use of the bdg_coverage function to calculate depth of coverage for a specified sample. The presented call for coverage method takes sample identifier (sample1) and result type (blocks) as input parameters. bdg_coverage is implemented as a table-valued function. Therefore, it outputs a table as a result, allowing for customizing a query using Data Manipulation Language, e.g., in the SELECT or WHERE clause. For the purpose of this example, we assume that the BAM file for sample1 contains only reads from chr3. (C) Concept of distributed version of events-based algorithm. Assuming that we run our calculations in a distributed environment, the computation nodes do not work on the whole input data set (table read_set) but on n smaller data partitions (slice1, slice2, …, slicen), each containing a subset of input aligned reads. The algorithm first calculates the partial events vector for available data slices and subsequently produces a corresponding partial partial_coverage vector. Because of the possibility of overlapping of ranges between 2 consecutive data slices, an additional correction step needs to be performed. When an overlap is identified, the corresponding coverage values from the preceding vector’s tail are cut and added to the head values of the subsequent vector. On the figure, 2 overlaps are shown, one of them situated between partial_coverage1 and partial_coverage2 (overlap12 of length 4) encompassing positions chr3:101–104. The coverage values from partial_coverage1 for overlap12 are removed from partial_coverage1 and added to the head of partial_coverage2. As a result, a set of non-overlapping coverage vectors are calculated, which is further integrated into the depth of coverage for the whole input data set. (D) Implementation details of SeQuiLa-cov. We have used the Apache Spark environment, where a single driver node runs the high-level driver program, which schedules tasks for multiple worker nodes. On each worker node, a set of data partitions are accessed and manipulated in order to generate events and partial_coverage vectors. To gather data about partial_coverage vectors’ ranges along with tailing coverage values, and to distribute data needed for rearranging coverage vector values and ranges, we have used Spark’s shared variables “accumulator” and “broadcast,” respectively.