A new study that details mosquito immune cells could shed light on the insect immune system and how mosquitoes transmit parasites that cause malaria.

A new study, published recently in the peer-reviewed scientific journal eLife, identifies several new forms of mosquito immune cells, providing new clarity into the mosquito immune system. Immune cells play a central role in the immune response of mosquitoes toward malaria parasites and viruses after these pathogens are taken up upon feeding on an infected person. It’s a field of study that has remained poorly understood due to the lack of genetic tools, said Ryan Smith, an associate professor of entomology at Iowa State University and lead author of the study.

“These experiments lay the foundation for a better understanding of how these immune cells function that could lead to a future when humans are able to make mosquitoes unable to transmit disease,” Smith said.

The new study utilized single-cell RNA sequencing, a relatively new technique that allows researchers to examine the cellular messages within individual cells, to characterize mosquito immune cells, known as hemocytes. The study found mosquito hemocytes show greater complexity than previously thought, evidence of cell differentiation, and that some cells may even undergo a maturation process. The authors also provided comparative analysis to single-cell studies in other insect systems, highlighting important similarities and differences between mosquitoes and other insects. The new study is an important first step for future exploration of the mosquito immune system, which could be important for gaining better understanding of how mosquitoes transmit pathogens, such as malaria parasites, to humans through their bite. 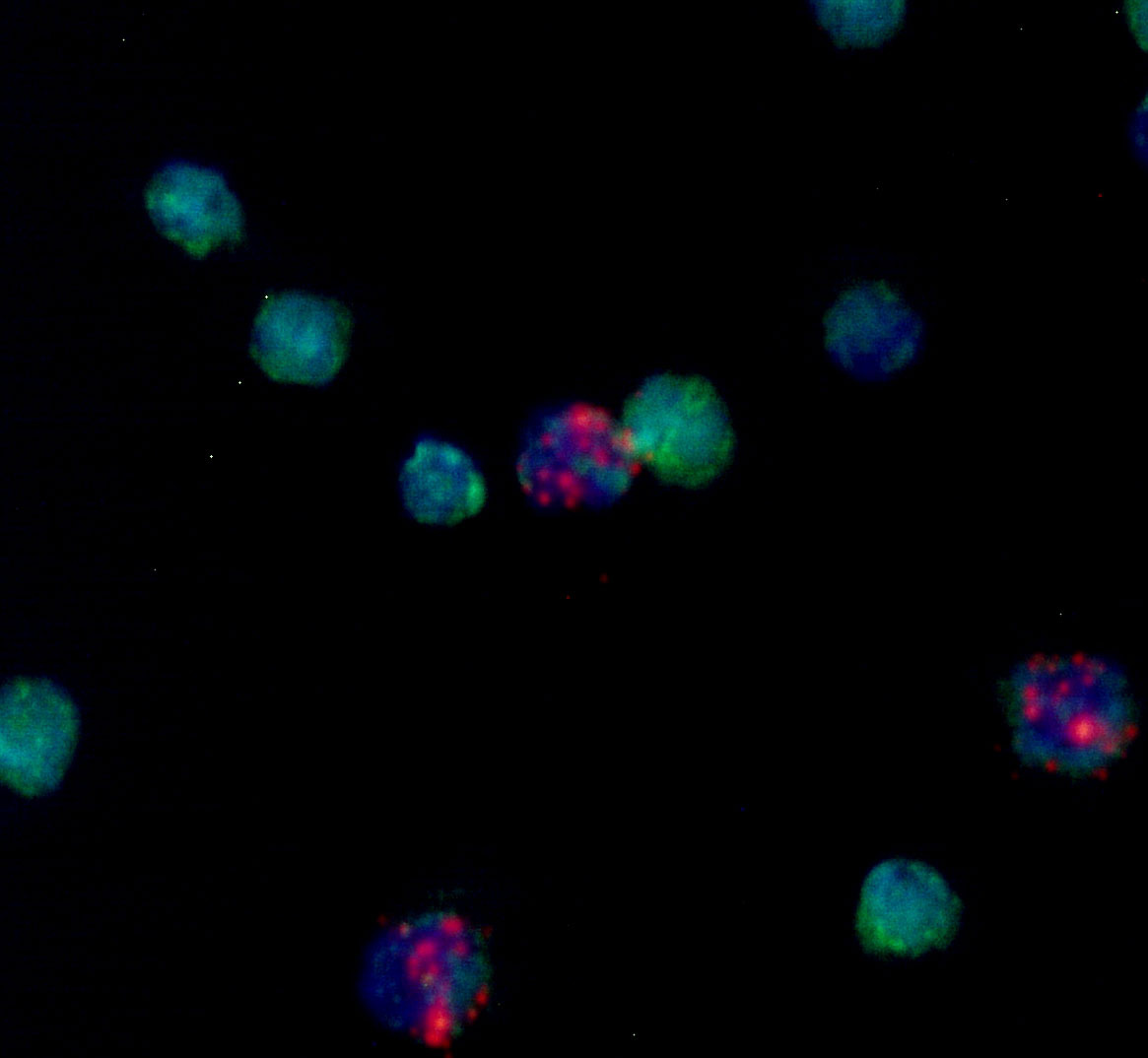 This magnified image shows a mixed population of mosquito immune cells denoted by the expression of distinct cellular markers displayed by green and red colors. Studying the differences among mosquito immune cells could help scientists learn how the insects transmit disease to humans and other species. Image courtesy of Ryan Smith

“There’s a big body of evidence that suggests that immune cells of mosquitoes are really critical to their ability to transmit disease,” Smith said. “From that perspective, we haven’t really known a great deal about the molecular aspect of what those immune cells look like.”

Smith even envisions a future, though it’s still years away, when this line of research could lead to the production of mosquitoes genetically modified to overexpress certain immune cell populations that reduce the ability of a mosquito to transmit pathogens that cause mosquito-borne disease. These resistant mosquitoes could then be introduced into wild mosquito populations to breed and spread these genetic traits. The result could be mosquito populations that are less likely to spread disease to humans, though Smith cautions it’s all purely theoretical at this point.