An international team of researchers led by Barbara Treutlein of the Max Planck Institute for Evolutionary Anthropology in Leipzig, Germany, and Takanori Takebe of Cincinnati Children’s Hospital Medical Center, USA, and Yokohama City University, Japan, used novel genomic and stem cell technologies to understand how individual cells work together and use their genomes to develop into human liver tissue. This new research greatly advances efforts to bioengineer healthy and usable human liver tissue from human pluripotent stem cells. Still, researchers say the tissues need additional rounds of molecular fine tuning before they can be tested in clinical trials.

The only current treatment for end-stage liver disease is a liver transplant, and the number of livers available from deceased donors is limited. A major goal in regenerative medicine is therefore to attain self-organizing human tissues – in which cells experience a series of coordinated molecular events precisely timed and spaced to form functioning three dimensional liver buds. Nailing down the precise details and context of developmental molecular-cellular crosstalk in the endoderm of an embryo – where livers form – is critical to achieving this technology’s therapeutic potential.

“The ability to bioengineer transplantable livers and liver tissues would be a great benefit to people suffering from liver diseases who need innovative treatments to save their lives,” said Takanori Takebe, physician and investigator at Cincinnati Children’s Hospital Medical Center and Yokohama City University. “Our data gives us a new, detailed understanding of the inter-cellular communication between developing liver cells, and shows that we can produce human liver buds that come remarkably close to recapitulating fetal cells from natural human development.”

In the current study, the authors used single-cell RNA sequencing (RNA-Seq) to monitor how individual cells change when they are combined in a three-dimensional (3D) microenvironment where vascular cells, connective tissue cells and hepatic cells engage in a complex communication. “The main advantage of using single-cell RNA-Seq technology is it gives us a map of gene activity in each and every cell type, allowing us to eavesdrop on the conversation”, says Keisuke Sekine from Yokohama City University, Japan, co-first author of the study. The researchers zeroed in on developing a complete blueprint of active transcription factors (genes that tell other genes what to do), signaling molecules and receptors in each of the different types of cells before and after the cells come together to form the liver bud tissue. The authors observed that there is a dramatic change in the conversation and how the cells behave when all of the cells develop together in 3D. “It was exciting to see, for the first time, how individual cells are reacting to each other when put into the same context within the liver bud. It’s a bit like people-watching at a party,” says Gray Camp of the Max Planck Institute for Evolutionary Anthropology, the study’s other co-first author.

Single-cell RNA-Seq analysis also helped the researchers to benchmark the engineered 3D liver tissues generated from stem cells in the lab against naturally occurring human fetal and adult liver cells. Researchers observed that their lab-grown liver buds have molecular and genetic signature profiles that very closely resemble those found in naturally developing human liver cells. “Our data reveals, in exquisite resolution, that the conversation between cells of different types changes the cells in a way that likely mimics what is going on during human liver development”, says Barbara Treutlein. In particular they highlight molecular crosstalk between a signaling protein that cells produce to stimulate formation of blood vessels (VEGF) and a protein and receptor that communicates with VEGF to help trigger formation of a blood supply to the developing liver (KDR), which the current study shows is critical to instructing the development and maturation of liver tissues. Researchers observed this crosstalk during development of mouse liver cells, natural human liver cells and in their bioengineered livers. 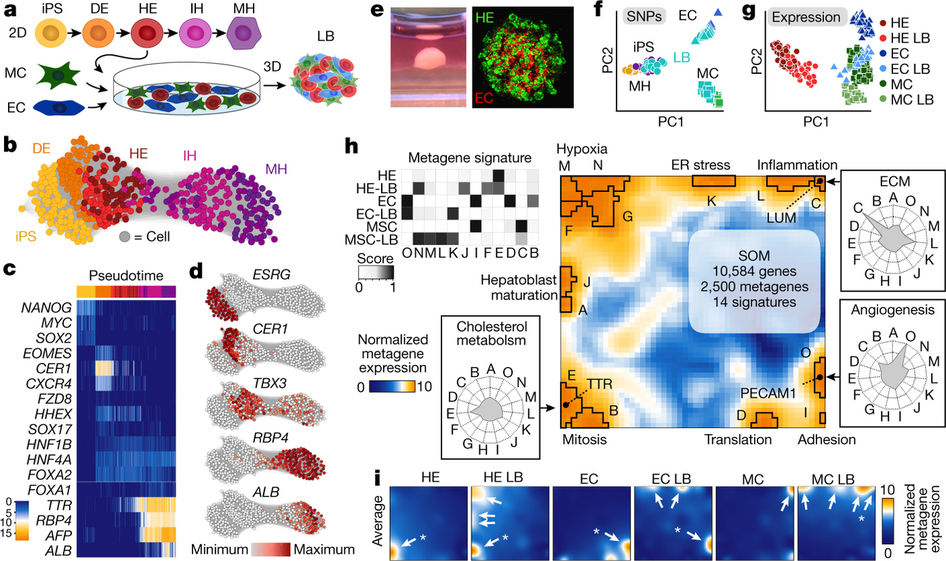 The authors also noticed the gene expression landscape in the generated liver buds – such as precisely where and when genes express themselves – did not completely match natural human liver cells. The remaining gaps between natural and bioengineered tissues may come from different developmental cues caused by the unique microenvironment of cells developing in a petri dish versus that of cells developing in a person or animal. The new cellular and molecular data uncovered in the current study will be “exploited in the future to further improve liver bud organoids” and “precisely recapitulate differentiation of all cell types” in fetal human development, the authors write. “There is still a lot left to learn about how to best generate a functioning human liver tissue in a dish”, concludes Treutlein. “Nevertheless, this is a big step in that direction”.