Posted by: RNA-Seq Blog in Commentary, Publications 18 days ago 507 Views

A tiny region at the root tip has been found to be responsible for orchestrating the growth and development of the complex network of vascular tissues that transport sugars through plant roots.

In a paper published in Science, an international team of scientists present a detailed blueprint of how plants construct phloem cells—the tissue responsible for transporting and accumulating sugars and starch in the parts of the plant that we harvest (seeds, fruits and storage tubers) to feed much of the world.

Phloem is a highly specialised vascular tissue that forms an interconnected network of continuous strands throughout a plant’s body. It transports sugars, nutrients, and a range of signalling molecules between leaves, roots, flowers, and fruits.

As a result, phloem is central to plant function. Understanding how the phloem network is initiated and develops is important for future applications in agriculture, forestry, and biotechnology as it could reveal how to better transport this sugar energy to where it is needed.

Schematic of the plant root, showing the different cell subtypes of phloem cells, which transport sucrose around the plant and ultimately give rise to the starch in foods 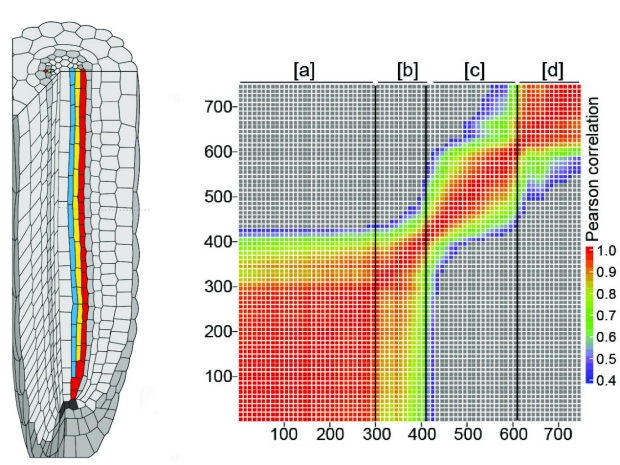 Phloem tissue is born from stem cells toward the bottom of the conical root tip and are then pushed upward as they mature along an assembly line. Researchers dissected the 19-cell developmental trajectory of phloem cells from their birth to maturation in a journey of 19 cell positions. The graph on the right shows a computational analysis of single-cell states along the trajectory, where “pinch points” mark dramatic developmental transitions. The research involved finding the genetic mechanisms that control the developmental transitions and the regulatory “code” to the construction of phloem. Image credit: Science & Pawel Roszak

How do plants build a sugar lane in a multi-lane highway?

Plant roots continue to grow throughout a plant’s life. This phenomenon, known as indeterminate growth, means roots continually elongate as they add new tissues to the tip of the root—like constructing a never-ending highway. A continuous file of specialised phloem cells running the length of roots (analogous to a lane on a highway) delivers the primary nutrient, sucrose, to the parts of the plant where it is needed for growth. To fulfil this vital role, phloem tissue must develop and mature rapidly so it can supply sugars to surrounding tissues—akin to building a service lane that needs to be completed in the first stage of constructing a multi-lane highway.

The problem that has long puzzled plant scientists is how a single instructive gradient of proteins are able to stage the construction phases across all the different specialised cell files (highway lanes) that are present in roots. How does one cell type read the same gradient as its neighbors, but interpret it differently to stage its own specialised development is a question that plant scientists have been working to resolve.

Over the past 15 years, researchers in Yrjö Helariutta’s teams at the University of Cambridge and University of Helsinki have uncovered the central role of cell-to-cell communication and complex feedback-mechanisms involved in vascular patterning. This new research, undertaken with collaborators at New York University and North Carolina State University, reveals how this single lane of phloem cells is constructed independently of surrounding cells.

The Sainsbury/Helsinki group dissected each step in the construction of the phloem cell file (the sugar transport lane) in the model plant Arabidopsis thaliana using single-cell RNA-seq and live imaging. Their work showed how the proteins that control the broad maturation gradient of the root interact with the genetic machinery that specifically controls phloem development.

This is one mechanism that appears to help the phloem cell file to fast-track maturation using its own machinery to interpret the maturation cues.

Pawel Roszak, co-first-author of the study and researcher at the Sainsbury Laboratory Cambridge University (SLCU), explains: “We have shown how global signals in the root meristem interact with the cell type specific factors to determine distinct phases of phloem development at the cellular resolution. Using cell sorting followed by deep, high-resolution single-cell sequencing of the underlying gene regulatory network revealed a ‘seesaw’ mechanism of reciprocal genetic repression that triggers rapid developmental transitions.”

The group also showed how phloem development is staged over time, with early genetic programs inhibiting late genetic programs and vice versa—just as the road asphalt-laying work crews’ hand over construction to lane painters in the latter stages of highway construction. In addition, they showed how early phloem regulators instructed specific genes to split the phloem cells into two different subtypes—like the construction of a fork in the road leading to two separate destinations.

Co-leader of the work, Yrjö Helariutta, said his teams’ reconstruction of the steps from birth to terminal differentiation of protophloem in the Arabidopsis root exposed the steps.

“By combining single-cell transcriptomics with live imaging, here we have mapped the cellular events from the birth of the phloem cell to its terminal differentiation into phloem sieve element cells. This allowed us to uncover genetic mechanisms that coordinate cellular maturation and connect the timing of the genetic cascade to broadly expressed master regulators of meristem maturation. The precise timing of developmental mechanisms was critical for proper phloem development, with apparent ‘fail safe’ mechanisms to ensure transitions.”

New York University researchers provided several key technical tools for the project. Kenneth Birnbaum, professor in the Department of Biology and the Center for Genomics and Systems Biology, and Dennis Shasha, professor of computer science at the Courant Institute of Mathematical Sciences, contributed to the analysis of single-cell RNA-seq data, developing the computational models that revealed genetic networks involved in the shift of development programs—i.e., the crew shifts in highway construction. Birnbaum’s lab also shared long-term live imaging techniques that enabled the research team to “watch” phloem cells progress from birth to full maturation over days under the microscope. The long-term microscopy helped show the coordination of the timing of the “lane-splitting” and phloem enucleation events to the molecular state of cells.

“This is a Golden Age for discovery in biology with new tools that help us connect the molecular state of individual cells with real-time observations of the cell,” said Birnbaum. “These single-cell measurements and live imaging techniques are to the cell what satellite imaging is for the earth. Our phloem project shows the potential of these tools to understand the development of plant cells, in particular, those that are so crucial to human nutrition.”

The researchers plan to further explore the evolution of these mechanisms and whether these steps are replicated in other regions of plants and other plant species.