Researchers at St. Jude Children’s Research Hospital have created a massive database of the changes in gene activity of individual cells in the cerebellum during embryonic development and immediately after birth. The analysis of thousands of brain cells isolated from mice offers researchers a high-resolution map that enables scientists to view the detailed genomic changes cells undergo as the cerebellum wires its neural circuitry.

The research will not only aid basic understanding of brain development, but also provide a foundation for understanding the cellular origins of brain disorders caused by errors in development. These anatomical defects include Joubert syndrome, Dandy-Walker malformation and pontocerebellar hypoplasia. The database will enable future studies tracing the cellular origins of childhood brain tumors such as medulloblastoma, astrocytoma and ependymoma.

Researchers worldwide can interact with the data via an interface St. Jude has created called Cell Seek.

Although the cerebellum constitutes only about 10 percent of brain volume in humans, it contains more than half of all nerve cells in the central nervous system. The cerebellum is also a key brain control center, coordinating motor function and governing higher functions such as attention, and spatial and language processing.

In their research, Easton, Northcott, Gawad and their colleagues used a genetic sequencing technology called single-cell RNA-seq to measure the continually changing activity of genes in single brain cells isolated from embryonic and newborn mice. The researchers sequenced RNA because the level of such RNA reflects the level of gene activity, or “expression,” in the cell. RNA acts as the template to construct proteins that are the building blocks of cells.

Most such previous brain developmental studies analyzed changes in mixes of different brain cell types or studied a limited number of genes. However, the St. Jude researchers analyzed gene expression in a vast array of genes in each of the cell types present in the developing mouse brain.

“What we have done is acquire global expression profiles of individual cells without using any prior knowledge. This has allowed us to study how many cell types there are at a specific development point and how they are related to each other in a much less biased manner than previous strategies,” Gawad said. “If we can capture cells in these different developmental states, we can begin to understand pediatric diseases that happen as a result of abnormal cerebellar development.”

“Also, since most brain tumors in young children occur in the cerebellar region, this will help us identify the cells of origin for different brain tumors and brain tumor subtypes,” he said.

To demonstrate their database, the researchers traced the gene expression in a type of immature brain cell called a glutamatergic progenitor cell as it “decided” what type of mature brain cell to become. Their analysis revealed that the decision point was characterized by waves of activation of master-control genes called transcription factors that regulate other genes.

“This analysis showed us that the developmental program for these cells was even more complex than we previously appreciated,” Gawad said. The finding opens the door for a deeper understanding of the type and order of genetic processes that drive these cells’ maturation, he said.

The Cell Seek interface will enable researchers worldwide to glean insight into brain development from the data, Gawad said.

“These kinds of data would not otherwise be accessible to many labs, as they are even more complex to analyze than traditional RNA sequencing data,” he said.

“We wanted to build an easy-to-use interface that allowed labs without bioinformatics capability to mine the data,” Gawad said. “With Cell Seek, they can easily track the developmental processes they are interested in and use the insights to inform their experiments to study cerebellar development and disease.” 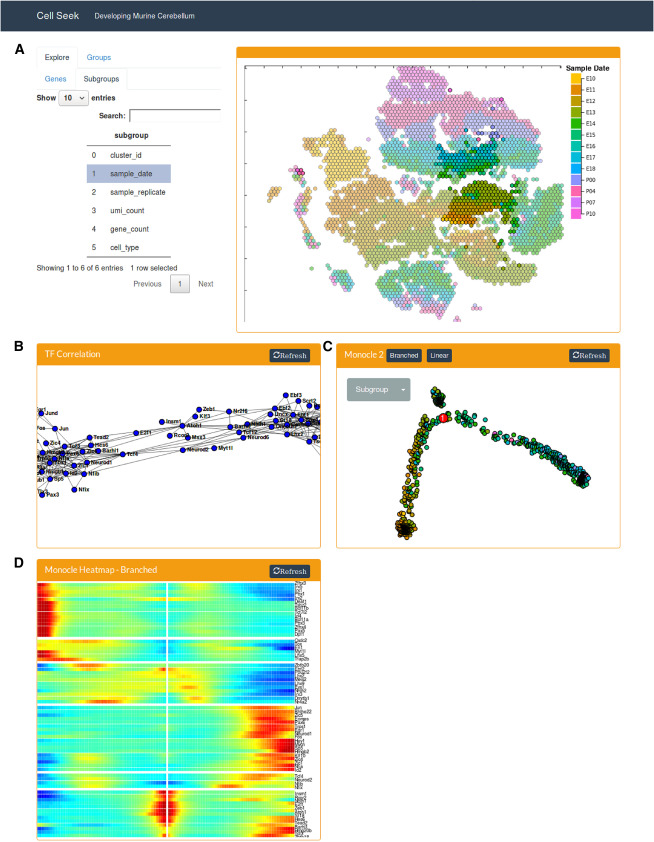 (A) The main scatterhex plot allows panning and zooming of a two-dimensional view of a dataset, with cells pooled into hexbins. Both gene expression summaries and subgroup information such as sample date and cell type can be visualized. (B) The correlation network of TFs that show nonrandom expression patterns in the t-SNE plot can be explored using any selected group of cells. (C) Selected cells can be ordered in pseudotime using Monocle 2 to enable the separation of dyssynchronous expression programs. (D) TFs that show either branch- or pseudotime-specific expression can be displayed in a heatmap.

Other St. Jude researchers are already using Cell Seek in their studies of both normal development and childhood cancer formation.