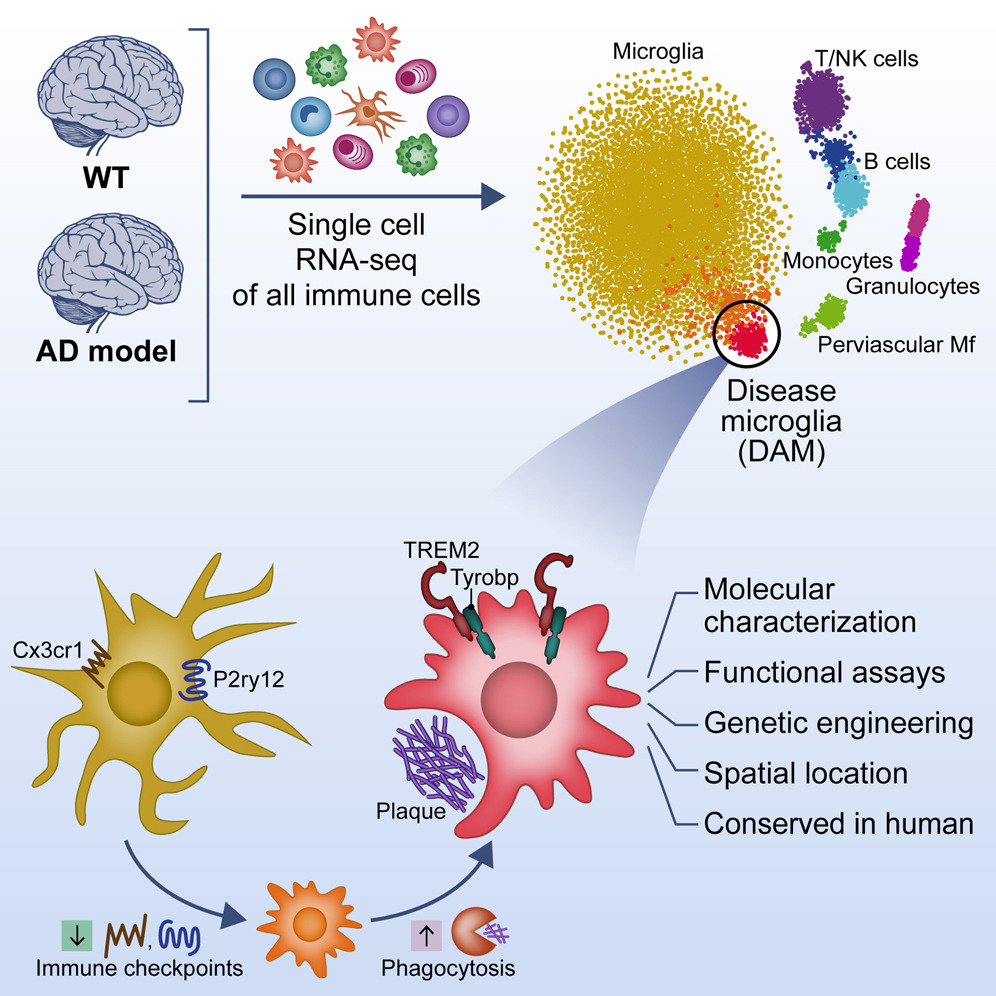 Alzforum – Using single-cell transcriptomics, researchers at the Weizmann Institute of Science identify a specific subset of microglia that surround plaques. The cells express proteins that break down lipids and gobble up Aβ deposits. The activation of these disease-associated microglia (DAM), which may occur in two stages, requires TREM2, a risk gene for AD.

Scientists have been trying to figure out how immune cells—particularly microglia—contribute to Alzheimer’s and other neurodegenerative diseases for decades. They were limited by available methods, notably the use of commonly expressed cell-surface markers to isolate and analyze the cells. “Now we have single-cell RNA sequencing technology that allows us to look at these immune cells in an unbiased way on a single-cell level,” said Tristan Li, Stanford University, California, who was not involved in the study. What emerges is a clear picture of the states of individual cells, he said. “This is like using a new microscope to get a higher resolution,” said Marco Prinz, University of Freiburg, Germany. “It was not possible previously to analyze subpopulations of microglial cells.” 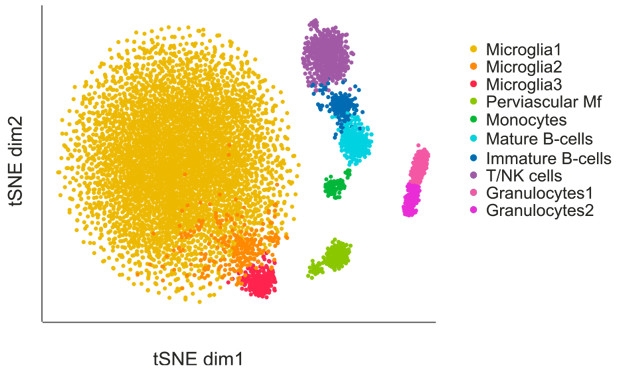 Using cell-surface markers to isolate microglia lumps a mixture of cells together, without capturing their diversity. To overcome this, Amit’s group has been working to apply single-cell RNA sequencing. The idea is to identify the molecular characteristics of subtypes of cells, Amit wrote to Alzforum.

First author Hadas Keren-Shaul and colleagues used single-cell RNA-seq to compare microglia from wild-type mice to those from 5xFAD animals, which express five familial AD mutations. These mice develop plaques around two months of age, followed by neuronal loss and cognitive deficits at six months. From the latter age group and age-matched controls, the researchers first isolated cells from whole brain tissue by capturing those that express the immune marker CD45+. They placed individual cells into separate wells and sequenced the messenger RNA (mRNA) from each. This gave them RNA fingerprints they used to group cells and pinpoint differences between the diseased and healthy states.

The scientists found 10 distinct subtypes of immune cell, including monocytes, perivascular macrophages, and a variety of lymphocytes. By far the largest group in both diseased and healthy mice were resting-state, or homeostatic, microglial cells. The researchers called these group I (see image above). Diseased mice harbored two additional minor subsets—groups II and III—that were absent from the healthy animals. These disease-associated microglia, or DAMs, differed from group I microglia in that they turned down expression of certain homeostatic genes, such as CX3CR1 and TMEM119, and dialed up genes for lipid metabolism and phagocytosis, such as CST7 and the AD risk genes APOE and LPL. They also expressed other AD-related genes at higher levels, including CTSD, TYROBP, and TREM2. Group II cells expressed many of the same genes as group III microglia, bar the phagocytic ones, suggesting they may be intermediary between groups I and III. Li was surprised that the authors found no changes in expression of inflammatory molecules, such as cytokines, which have been linked to activated microglia.