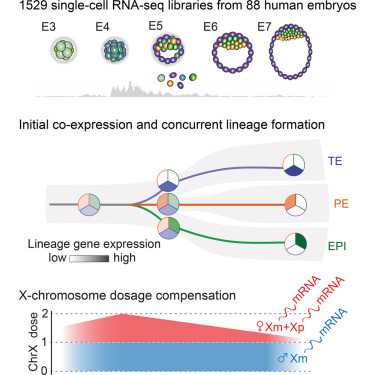 Mouse studies have been instrumental in forming our current understanding of early cell-lineage decisions; however, similar insights into the early human development are severely limited.

Here, researchers from the Karolinska Institutet present a comprehensive transcriptional map of human embryo development, including the sequenced transcriptomes of 1,529 individual cells from 88 human preimplantation embryos. These data show that cells undergo an intermediate state of co-expression of lineage-specific genes, followed by a concurrent establishment of the trophectoderm, epiblast, and primitive endoderm lineages, which coincide with blastocyst formation. Female cells of all three lineages achieve dosage compensation of X chromosome RNA levels prior to implantation. However, in contrast to the mouse, XIST is transcribed from both alleles throughout the progression of this expression dampening, and X chromosome genes maintain biallelic expression while dosage compensation proceeds.

(A) Left: quality of single-cell RNA-seq experiments assessed as nearest-neighbor similarities between cells (maximum Spearman correlation per cell, using all cell-pairs and all genes). Right: histogram of the number of expressed genes per cell. Genes with RPKM ≥1 were considered expressed. The histograms were smoothed using a Gaussian kernel.

(B) Number of embryos and cells per embryonic day (E3–E7) retained after quality filtering.

(E) Two-dimensional t-SNE representation of 1,529 single-cell preimplantation transcriptomes using the 500 most variable genes across all cells (according to Figures S2A and S2B). E3–E7 indicate the embryonic day and E4.late and E5.early indicate cells picked 4–6 hr later and earlier, respectively, than the other cells from that embryonic day.

(F) A pseudo-time was assigned to each cell by fitting a principal curve to the cells in the two-dimensional t-SNE subspace (Figure 1E). ICM cells were excluded from the fit to let the principal curve better reflect time and minimize lineage-effects (Supplemental Experimental Procedures).