Single Cell RNA-Seq Reveals the Fundamental Units of the Brain 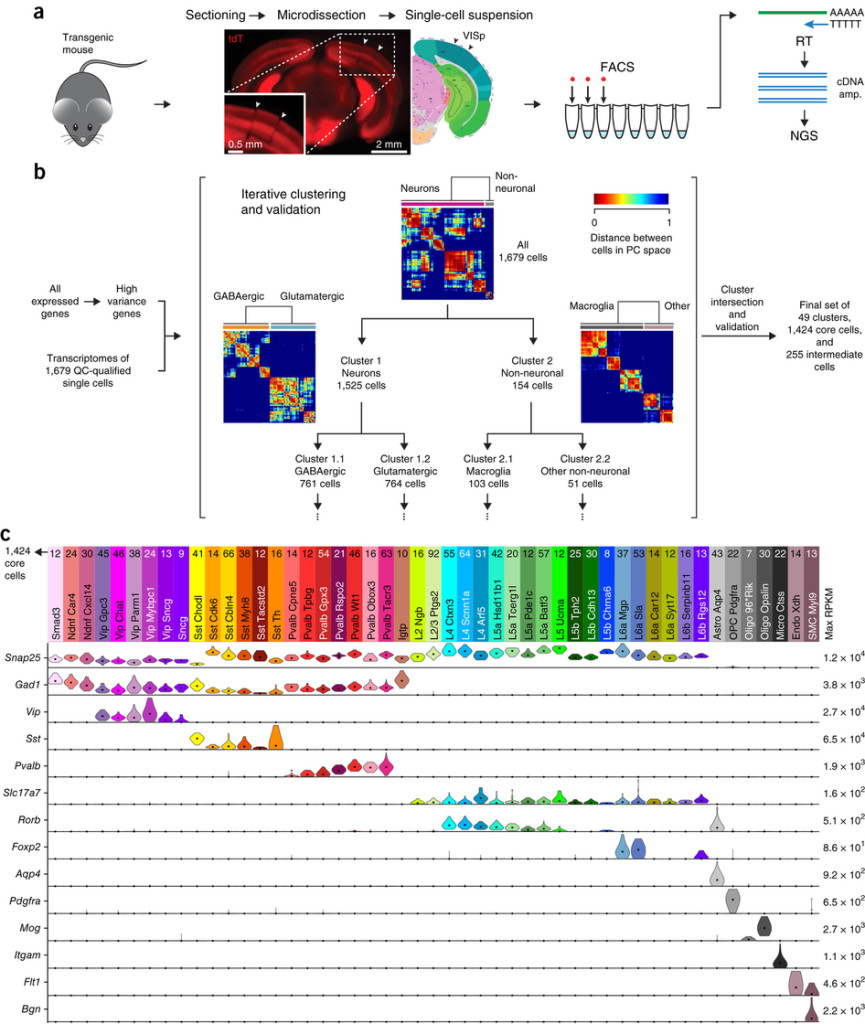 (a) Experimental workflow started with the isolation, sectioning and microdissection of the primary visual cortex from a transgenic mouse. The tissue samples were converted into a single-cell suspension, single cells were isolated by FACS, poly(A)-RNA from each cell was reverse transcribed (RT), cDNA was amplified and fragmented, and then sequenced on a next-generation sequencing (NGS) platform.

(b) Analysis workflow started with the definition of high-variance genes and iterative clustering based on two different methods, PCA (shown here) and WGCNA, and cluster membership validation using a random forest classifier. Cells that are classified consistently into one cluster are referred to as core cells (N = 1,424), whereas cells that are mapped to more than one cluster are labeled as intermediate cells (N = 255). After the termination criteria are met, clusters from the two methods are intersected, and iteratively validated until all core clusters contain at least four cells.

From Bio-IT World By Aaron Krol

January 20, 2016 | An adult mouse’s brain, an object not much bigger than the last joint of your pinky finger, contains around 75 million neurons. At the Allen Institute for Brain Science in Seattle, the Mouse Cell Types program, led by Hongkui Zeng, is trying to figure out just how many varieties of neurons make up this vast complex, and what makes each one unique.

Zeng’s research focuses on the primary visual cortex, a tiny sliver of the brain where signals from the eyes are processed and interpreted. Because vision is a relatively well-defined process, it’s thought to be a good model for connecting the behavior of individual neurons to larger brain functions.

“You really can’t understand a system until you understand its parts,” says Bosiljka Tasic, a founding member of the Mouse Cell Types program.

To a shocking extent, those parts are still a mystery. Many supposed cell types are based on little more than what you can see through a microscope: a neuron’s shape, or the pattern of rootlike dendrites extending from its body. These morphological traits, though important, are hard to see in full, and even harder to track methodically across thousands or millions of cells.

This month, Zeng’s team published a study in Nature Neuroscience that takes advantage of new technological developments to get a fine-grained look at the molecular toolkits of single neurons. Using newly refined methods to isolate single cells, Zeng’s lab collected over 1,600 brain cells from the visual cortexes of adult mice, intact and in good shape for sequencing. With advances in highly parallel, unbiased RNA sequencing, the group was able to measure each cell’s entire “transcriptome”―the array of RNA molecules that indicate which genes are actively producing proteins―at a depth that reveals even the scarcest RNA traces.

“We think this is probably the most comprehensive survey of a cortical area,” says Tasic, who co-led the study with her colleague Vilas Menon. “Many studies that are coming out now do very shallow sequencing… We wanted to go deeper.” With a median of 8.7 million sequencing reads per cell, the authors discovered a wealth of new RNA markers that define discrete groups of neurons. Some of these markers suggest that known cell types in the brain can be split into smaller sub-categories. A few even stake out rare types of neurons that may be new to science.

Yet the data collected for this study also confirms that the brain’s biology is neither tidy nor easy to unravel.

“There is this obsession in the field, and in many other areas of biology, that people always want cleanliness and discreteness,” Tasic says. Instead, her efforts to classify neurons have shown that “types” can be slippery, and many cells straddle the line between closely related groups. As projects like this one seek to redefine cell types for the genomics age, scientists will have to face these ambiguities and consider what they can tell us about the nature of the brain. (read more…)