A study analyzing brain tumor genomics on a single-cell level has found evidence that cancer stem cells fuel the growth of oligodendrogliomas, a slow-growing but incurable form of brain cancer. In their paper receiving advance online publication in Nature, a team led by investigators at Massachusetts General Hospital (MGH) and the Broad Institute of MIT and Harvard identifies for the first time cancer stem cells and their differentiated progeny in human brain tumor samples.

“Our work strongly supports that cancer stem cells are the main source of growth in these tumors and, as such, should be considered promising targets for treatment,” says Mario Suvà, MD, PhD, of the MGH Department of Pathology, co-senior author of the Nature paper.

It has become clear that cancer stem cells – cells within tumors that exhibit stem cell characteristics and can differentiate into other specialized types of cancer cells – have a role in the progression and treatment resistance of several types of tumors, most prominently blood system tumors like leukemia. Several studies have supported a role for cancer stem cells in the aggressive brain tumors called glioblastoma, but those studies involved inducing human tumors to grow in mice, and as such their relevance to cancer in humans has been questioned. To more accurately reflect the mechanisms driving oligodendrogliomas, the researchers used RNA sequencing to study directly, on a single-cell level, gene expression in samples from six early-stage human tumors.

Their analysis of more than 4,000 individual tumor cells, the largest effort to date in brain tumors, finds three developmental categories of cancer cells – one resembling neural stem cells and two characterized by sets of genes indicting paths towards differentiation. The authors then observed that only a subset of cancer stem cells in each patient was showing signs of proliferation, while all other cancer cells were not. Importantly, these three developmental signatures were found in distinct genetic clones – cells with identical patterns of genetic mutations – of tumor cells.

“Finding that different subclones within tumors show the same developmental patterns suggests that developmental programs – whether in stem cells or differentiated cancer cells – set the context within which genetic evolution of oligodendroglioma occurs, which is key to supporting the cancer stem cell model,” says Suvà, who is an assistant professor of Pathology at Harvard Medical School, an investigator with the MGH Center for Cancer Research, and an associate member of the Broad Institute. “Trying to understand as much as we can about genetic versus non-genetic determinants of tumor organization is key to our understanding of tumor propagation and to the design of new therapies. Our work suggests that targeting a specific stem cell phenotype, for example with immunotherapies, could be beneficial in patients with oligodendroglioma.” 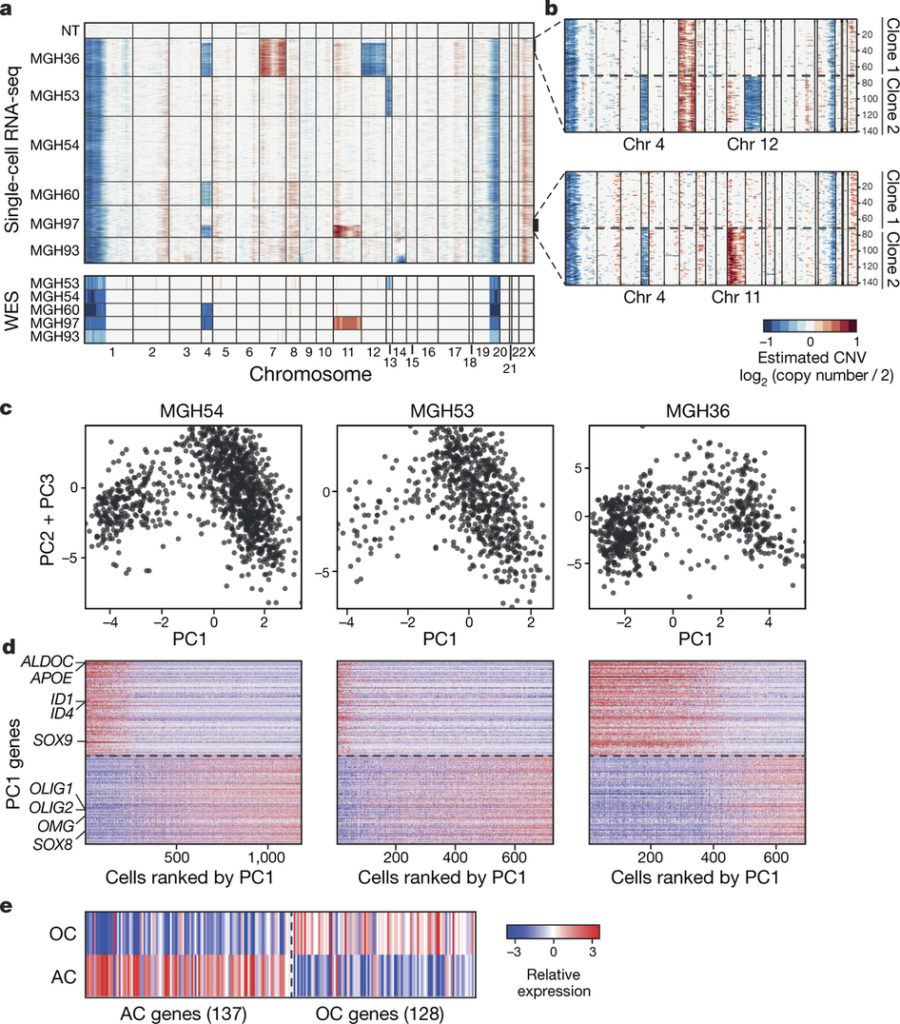 a, CNV profiles inferred from scRNA-seq (top) and DNA whole-exome sequencing (WES) (bottom) of oligodendrogliomas. Cells (rows, n = 4,347) are ordered from non-tumoural cells (NT, n = 303) to cancer cells (n = 4,044), ordered into six oligodendrogliomas. b, In MGH36 and MGH97, cells are ordered by CNVs, with zoomed in view shown. c, PCA of malignant cells. Shown are PC1 (x axis) versus PC2 and PC3 (y axis) scores of cells from three tumours based on a single combined PCA. d, Astrocyte-like and oligodendrocyte-like signatures. Relative expression of genes correlated most positively (bottom) or negatively (top) with PC1, in cancer cells from each of the three tumours (marked as in c), ranked by PC1 scores. Selected astrocyte (AC) and oligodendrocyte (OC) marker genes are highlighted. e, Relative expression of the mice orthologues of the genes shown in d (log2-ratio of the respective cell type compared to the average of oligodendrocyte, astrocyte, OPC and neurons).

Aviv Regev, PhD, a core member of the Broad Institute is co-senior author of the Nature paper; Itay Tirosh, PhD, of Regev’s lab and Andrew Venteicher, MD, PhD, of Suvà’s lab, are co-lead authors. David Louis, MD, chairman of the MGH Department of Pathology and Daniel Cahill, MD, PhD, from MGH Department of Neurosurgery also made major contributions to the work. The work was supported by funds from the MGH and the Broad Institute and grants from the National Brain Tumor Society and the Smith Family Foundation.