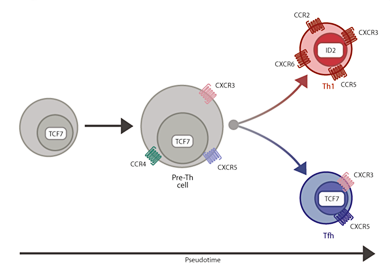 The researchers hypothesize that Cxcr5 and Cxcr3 are competing receptors that directly influenced Th1/Tfh cell fate.

Using the latest single-cell genomics technology and computational modelling, the study also discovered genes within the T cells that may be involved in controlling antibody production during malaria infection. One of these, Galectin 1, encouraged development of a particular type of T cell when active. These genes are possible drug targets to boost immunity to malaria and other infections.

The immune system is extremely complex and responds to disease by developing specific types of immune cells. Two different types of T cell – T helper1 (Th1) and T follicular helper (Tfh) – develop and help fight infection. The researchers discovered that more Th1 cells were produced when a gene called Galectin 1 was active. These Th1 cells help remove parasites from the bloodstream and are needed early on in an infection, however for longer-term immunity, more Tfh cells are needed.

“This is the first time that Galectin 1 acting inside T cells has been seen to influence Th1 fate, and has shown that Galectin 1 is a possible therapeutic target for malaria. An important next step will be to test many of the new gene targets identified by our studies, to see if they can be targeted by drugs to boost immunity to malaria.”

The exact molecules that encourage the T cells to develop into one or the other form are poorly understood.  The researchers used single-cell RNA sequencing to take ‘snapshots’ of the active genes produced by each individual T cell after the mouse was infected with malaria.  With these snapshots of data, the researchers identified all the different stages between immature T cells and fully specialised Th1 or Tfh cells.

“This is the first high-resolution time-course of cells using a pathogen in mice, where we have used cutting edge genomics coupled with computational methods to reconstruct how cells evolve and develop over infection. With methods from machine learning, we have simplified really complex biological processes into something we can understand. This approach could be applied to resolve any biological developmental process.”

Dr Sarah Teichmann, Head of Cellular Genetics at the Sanger Institute and joint lead author on the paper

The team also developed a new computer modelling system called GPfates* which allowed them to see how all the cells related to each other. This uses methods from spatio-temporal statistics, to show which genes were switched on in each of the two distinct cell states (Th1 and Tfh).

“Using genomics we uncovered the inter-cellular conversation that is taking place between immune cells such as monocytes and Th1 cells. This has not been seen before, and our data have allowed us to uncover tens or hundreds of new genes that may be involved in controlling the production of antibodies. Activity in these genes may help the body, for example in curing an infection, or may hinder by allowing cancerous cells to flourish. The principles and the computational methods we have developed here could be applied to future studies to explore these questions.”

Long noncoding RNA GK-IT1 promotes esophageal squamous cell carcinoma by regulating MAPK1 phosphorylation
24 May 2022
An Arabidopsis pre-RNA processing8a missense allele restores splicing of a subset of mis-spliced mRNAs
24 May 2022
Identification and classification of cis-regulatory elements in the amphipod crustacean Parhyale hawaiensis
24 May 2022
Two Different Species of <em>Mycoplasma</em> Endosymbionts Can Influence Trichomonas vaginalis Pathophysiology
24 May 2022
ExplorATE: A new pipeline to explore active transposable elements from RNA-seq data
24 May 2022
Citric acid of ovarian cancer metabolite induces pyroptosis via the caspase-4/TXNIP-NLRP3-GSDMD pathway in ovarian cancer
24 May 2022
Glomerular basement membrane deposition of collagen α1(III) in Alport glomeruli by mesangial filopodia injures podocytes via aberrant signaling through DDR1 and integrin α2β1
24 May 2022
Differences in H3K4me3 and chromatin accessibility contribute to altered T cell receptor signaling in neonatal naïve CD4 T cells
24 May 2022
Dual transcriptome based reconstruction of Salmonella-human integrated metabolic network to screen potential drug targets
24 May 2022
Comparison of Potato Viromes Between Introduced and Indigenous Varieties
23 May 2022
Single-Cell RNA-Seq and Bulk RNA-Seq Reveal Intratumoral Heterogeneity and Tumor Microenvironment Characteristics in Diffuse Large B-Cell Lymphoma
23 May 2022
RNA-seq and Network Analysis Reveal Unique Chemokine Activity Signatures in the Synovial Tissue of Patients With Rheumatoid Arthritis
23 May 2022
A N<sup>7</sup>-Methylguanine-Related Gene Signature Applicable for the Prognosis and Microenvironment of Prostate Cancer
23 May 2022
Insight into the potential pathogenesis of human osteoarthritis via single-cell RNA sequencing data on osteoblasts
23 May 2022
Impact of an Immune Modulator Mycobacterium-w on Adaptive Natural Killer Cells and Protection Against COVID-19
23 May 2022
β Cell-specific deletion of Zfp148 improves nutrient-stimulated β cell Ca2+ responses
23 May 2022
Innate immune mediator, Interleukin-1 receptor accessory protein (IL1RAP), is expressed and pro-tumorigenic in pancreatic cancer
23 May 2022
Bioinformatic Analysis of CircRNA from RNA-seq Datasets
23 May 2022
PqsE Expands and Differentially Modulates the RhlR Quorum Sensing Regulon in Pseudomonas aeruginosa
23 May 2022
Transcriptional landscapes of de novo root regeneration from detached Arabidopsis leaves revealed by time-lapse and single-cell RNA sequencing analyses
23 May 2022
Development and validation of an RNA-seq-based transcriptomic risk score for asthma
23 May 2022
Construction and validation of immune-related LncRNAs classifier to predict prognosis and immunotherapy response in laryngeal squamous cell carcinoma
23 May 2022
Unraveling T Cell Responses for Long Term Protection of SARS-CoV-2 Infection
23 May 2022
Transcriptome analysis of eutopic endometrial stromal cells in women with adenomyosis by RNA-sequencing
23 May 2022
Cell cycle gene regulation dynamics revealed by RNA velocity and deep-learning
23 May 2022
DNA methylation and expression profiles of placenta and umbilical cord blood reveal the characteristics of gestational diabetes mellitus patients and offspring
23 May 2022
CUB domain containing protein 1 (CDCP1) is a target for radioligand therapy in castration resistant prostate cancer including PSMA null disease
23 May 2022
Single-cell transcriptomics reveals lineage trajectory of human scalp hair follicle and informs mechanisms of hair graying
23 May 2022
Molecular Subgroups of Intrahepatic Cholangiocarcinoma Discovered by Single-Cell RNA Sequencing-Assisted Multi-Omics Analysis
23 May 2022
Effects of environmental concentrations of the fragrance amyl salicylate on the mediterranean mussel Mytilus galloprovincialis
23 May 2022
webSCST: an interactive web application for single-cell RNA-sequencing data and spatial transcriptomic data integration
23 May 2022
Demethylzeylasteral targets lactate by inhibiting histone lactylation to suppress the tumorigenicity of liver cancer stem cells
23 May 2022
Response to supraphysiological testosterone is predicted by a distinct androgen receptor cistrome
23 May 2022
Comparative transcriptome profiling of sweetpotato storage roots during curing-mediated wound healing
23 May 2022
Characterization and role of collagen gene expressing hepatic cells following partial hepatectomy in mice
23 May 2022
Immune priming with Candida albicans induces a shift in cellular immunity and gene expression of Musca domestica
23 May 2022
Analysis of single-cell RNA-sequencing data identifies a hypoxic tumor subpopulation associated with poor prognosis in triple-negative breast cancer
23 May 2022
Synthesis and in vitro/in vivo anticancer evaluation of pentacyclic triterpenoid derivatives linked with l-phenylalanine or l-proline
23 May 2022
Revisiting the Transcriptome Landscape of Pig Embryo Implantation Site at Single-Cell Resolution
23 May 2022
Comprehensive characterizations of immune receptor repertoire in tumors and cancer immunotherapy studies
23 May 2022
Development of a Risk Score Model for Osteosarcoma Based on DNA Methylation-Driven Differentially Expressed Genes
23 May 2022
Latent Membrane Proteins from EBV Differentially Target Cellular Pathways to Accelerate MYC-induced Lymphomagenesis
23 May 2022
Reduced subgenomic RNA expression is a molecular indicator of asymptomatic SARS-CoV-2 infection
23 May 2022
Ensemble classification based signature discovery for cancer diagnosis in RNA expression profiles across different platforms
23 May 2022
A Molecular Landscape of Mouse Hippocampal Neuromodulation
23 May 2022
scCloudMine: A cloud-based app for visualization, comparison, and exploration of single-cell transcriptomic data
23 May 2022
DEAD-Box Helicase 27 Triggers Epithelial to Mesenchymal Transition by Regulating Alternative Splicing of Lipoma-Preferred Partner in Gastric Cancer Metastasis
23 May 2022
A combinatorial indexing strategy for low-cost epigenomic profiling of plant single cells
23 May 2022
Single-Cell Transcriptomics Uncovers Cellular Heterogeneity, Mechanisms, and Therapeutic Targets for Parkinson's Disease
23 May 2022
Utility of Triti-Map for bulk-segregated mapping of causal genes and regulatory elements in Triticeae
23 May 2022