Removing a snippet of tissue from the body and subjecting it to the right tests can reveal a lot about a person’s disease or disease risk. With a new tool that zeros in on individual cells in such biopsies, doctors might be able to observe glitches in gene expression with enhanced precision—information that in some cases could yield more-effective treatments.

The method, called single-cell RNA sequencing, identifies genetic signatures associated with disease using only a tiny amount of tissue. It was recently put to the test in patients with lupus, an autoimmune disease that inflames and damages the kidney, among other tissues. Rockefeller’s Thomas Tuschl, along with scientists at Albert Einstein College of Medicine, Montefiore Health System, and other institutions, report the findings in Nature Immunology.

Focusing on kidney cells, the researchers found that single-cell RNA sequencing exposed changes in two sets of genes involved in the autoimmune response and in scarring, respectively. Both could inform how far the disease has progressed and what drugs are most likely to work, information not readily available from standard tests. The team obtained similar results by analyzing skin cells from lupus patients—opening up the possibility that kidney biopsies, which can be painful, might one day be avoided. 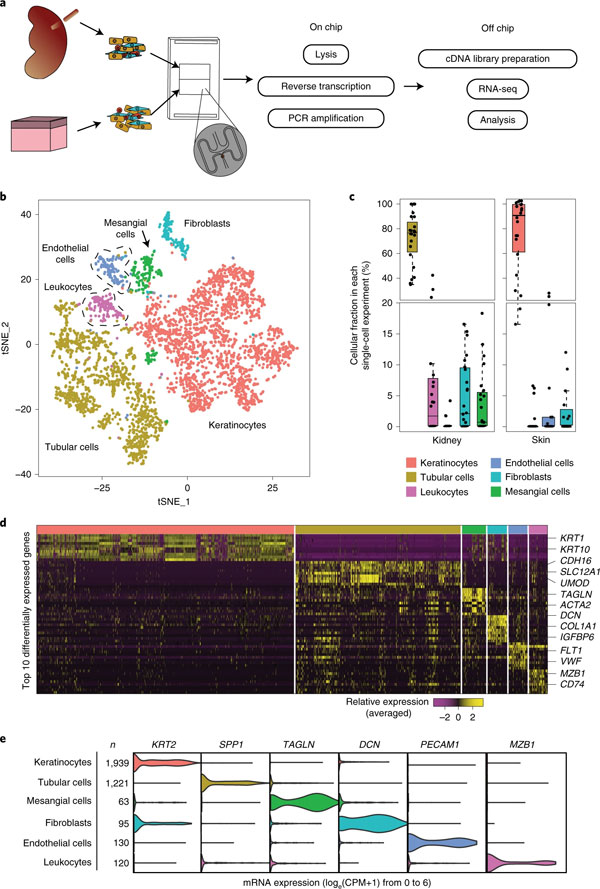 a, Schematic of the scRNA-seq pipeline. Skin (n = 17) and kidney (n = 21) samples from patients with LN or healthy control subjects (n = 3) were collected at the time of clinically indicated renal biopsy or live kidney donation, respectively. Skin and kidney biopsies were enzymatically disaggregated into single-cell suspensions and loaded on to a microfluidic device. b, The tSNE clustering of 4,019 single cells. PCA identified six major clusters of cells from both skin and kidney biopsies. Cells are color coded by an algorithm for determining expression clusters and cell types. c, Box plot of the percentage contribution of each cluster from skin and kidney biopsies. Boxes are colored by cluster corresponding to b. The boxes indicate the first quartile, median and third quartile. Whiskers indicate the highest and lowest values. Points were drawn as outliers if they were more than 1.5 times the interquartile range. d, Heatmap of the top 10 most differentially expressed genes in each cluster to identify mutually exclusive gene sets, which were then used to determine the cell lineage of each cluster. Each row is a differentially expressed gene and each column is a single cell organized by cluster identity. Transcript abundance ranges from low (purple) to high (yellow). e, Violin plot of selected markers indicating the expression level of canonical markers within each cluster. Violin plots are colored by cell type and the width represents the percentage of cells expressing the marker at a given level in loge(CPM (counts per million) + 1) from 0 to 6.