Houston Methodist researchers have identified the genetic and molecular fingerprints of different cancer and immune cells in glioblastoma, the deadliest and most common type of brain cancer in adults.

Their in-depth molecular analysis of over 200,000 single cells revealed a protein, called S100A4, that could be a potential therapeutic target for restoring antitumor action of immune cells toward glioblastomas that have otherwise tricked the immune system into protecting it.

The study, titled “Single-cell analysis of human glioma and immune cells identifies S100A4 as an immunotherapy target,” was recently published in Nature Communications, and advances the search for targeted therapies for heterogeneous tumors, which contain different types of tumor and normal cells mixed within a single mass. These heterogeneous cancers are notoriously difficult to manage, because treatments that work against one group of tumor cells may be completely ineffective in others. 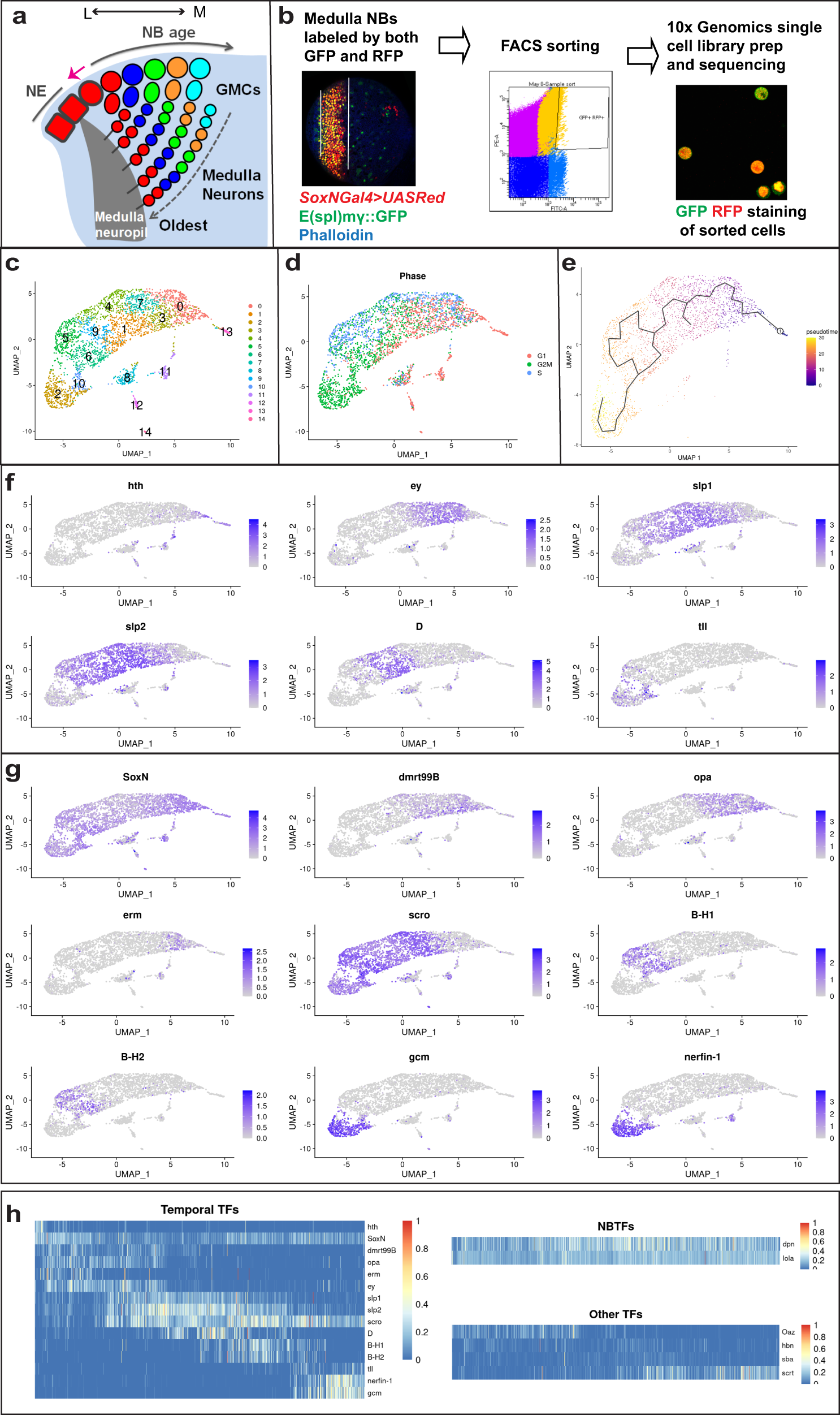 a A schematic drawing of the developing Drosophila medulla at the third instar larval stage. A neurogenesis wave (pink arrow) spreads from medial (M) to lateral (L), and sequentially converts NE cells into NBs. Thus, NBs from the youngest to the oldest are aligned on the lateral to medial axis. NBs sequentially express different TTFs, and generate differently fated progeny. The earliest-born neurons of each NB lineage are located closest to the medulla neuropil. The later-born neurons are located at more and more superficial layers. b The strategy and workflow of the scRNA-seq of FACS sorted medulla NBs. Medulla NBs are uniquely labeled by the combination of SoxNGal4>UAS- RedStinger (red) and E(spl)mγGFP (green). This brain is also stained with Phalloidin (blue). Dissected larval brains were dissociated into single-cell suspension and subjected to FACS sorting to enrich medulla NBs. Then 10x V3 Single-Cell libraries were generated using the sorted cells, and sequenced. c The sequenced cells were partitioned into 15 clusters using Seurat and visualized on UMAP plots. d The estimated cell-cycle phase of each sequenced cell was visualized on UMAP plots. e Pseudotime trajectories were generated using Monocle3, with the purple color stands for the earliest pseudotime, and yellow color stands for the latest pseudotime. f The expression patterns of known TTFs (Hth, Ey, Slp1, Slp2, D, and Tll) verify the pseudotime trajectories. g The expression patterns of newly identified TTFs visualized on UMAP plots. h Heatmaps showing the expression levels of three classes of TFs across the pseudotime. Temporal TFs include known and newly identified TTFs; NBTFs include Dpn and Lola that are expressed in NBs of all ages; other TFs include four TFs that show a temporal expression profile, but were not further characterized. The expression levels are visualized as a percentage of the maximum observed expression across all cells.

Around 48% of all primary malignant brain tumors are glioblastomas, and more than 10,000 people in the United States will succumb to the disease each year. The highly invasive brain cancer cells infiltrate the brain extensively, making surgical resection a very big challenge. Adding to the complexity of the disease is this cancer’s ability to rapidly mutate, so even in different locations in the brain of the same patient, glioblastoma encompasses a mosaic of cancer cell types, posing a major setback for targeted therapies.

As in the case with most diseases affecting the brain, the blood-brain barrier poses another challenge for drug delivery. In glioblastoma, the blood-brain barrier is weakened, allowing immune cells from the periphery to permeate the central nervous system. Mysteriously, however, glioblastomas tend to selectively attract or turn most immune cells that infiltrate the tumor to immune suppressive cells and promote their malignancy.

“A lot of immunotherapies currently target the reactivation of effector T cells, which are important to attack and eliminate cancer cells, but in glioblastoma, the effector T cell infiltration is, in fact, very low,” said Kyuson Yun, Ph.D., senior author on the study with the Houston Methodist Research Institute and associate professor of neurology at the Houston Methodist Academic Institute. “Instead, there is an overabundance of immunosuppressive myeloid cells in glioblastomas.”

To investigate the complex immune-cancer cell interactions, the researchers conducted comprehensive genetic profiling of different cell types in 44 samples of glioblastoma from 18 patients. For each patient, they analyzed glioblastoma tissue from different parts of the brain tumor to gain insights into the cancer’s heterogeneity within each patient. Then, they performed high throughput single-cell RNA sequencing to catalog individual cells based on their gene expression of different molecules.

Upon grouping the cells based on their molecular profiles, the researchers found that glioblastoma cells within and across patients could be categorized into nine groups based on their cellular state independent of the specific mutations in individual cells. They further identified nine subtypes of myeloid cells in glioblastoma, including the brain’s primary immune cells, the microglia, that are associated with better patient outcomes. The tumors were also filled with bone marrow-derived macrophages and regulatory T cells (Tregs) that are immunosuppressive and are linked with worse patient outcomes.

Hence, the researchers turned their attention to identifying a molecule activated in immune suppressive Tregs and myeloid cells. Their strategy was to spare “good” immune cells that are associated with better survival and selectively target “bad” immune cells that promote tumor growth and immune evasion. They discovered that the S100A4 regulator protein is produced and secreted by glioblastoma cancer cells, immunosuppressive T cells and bone marrow-derived myeloid cells.

Yun said her team plans to develop antibody drugs to target this S100A4 protein so that the glioblastoma’s tight grip on regulatory T cells and bone marrow-derived macrophages can be loosened. In addition, they plan to develop small molecules that can enter the nucleus of cancer cells and inhibit the function of the S100A4 protein in glioblastoma stem cells.

“Right now, therapies take a sledgehammer approach since there has been a lack of understanding about which myeloid cell types promote glioblastoma growth and which ones inhibit it,” Yun said. “Single-cell sequencing allowed us to define the heterogeneous myeloid cell types and identify the molecular characteristics of immune cells that promote or suppress tumor growth and consequently allowed us to selectively manipulate immune suppressive cells to restore the tumor-flighting action of the immune system.”

She added that in the next few years single-cell datasets such as those in this study will dramatically change the understanding of human cancer and guide efforts toward the development of new generations of anti-cancer drugs, particularly for immunotherapies.