Scientists have discovered that genes in human embryos rapidly become active after fertilisation, opening a new window onto the start of human embryonic life.

The finding that some genes are active from the get-go challenges the textbook view that genes don’t become active in human embryos until they are made up of four-to-eight cells, two or three days after fertilisation.

The newly discovered activity begins at the one-cell stage – far sooner than previously thought – promising to change the way we think about our developmental origins. 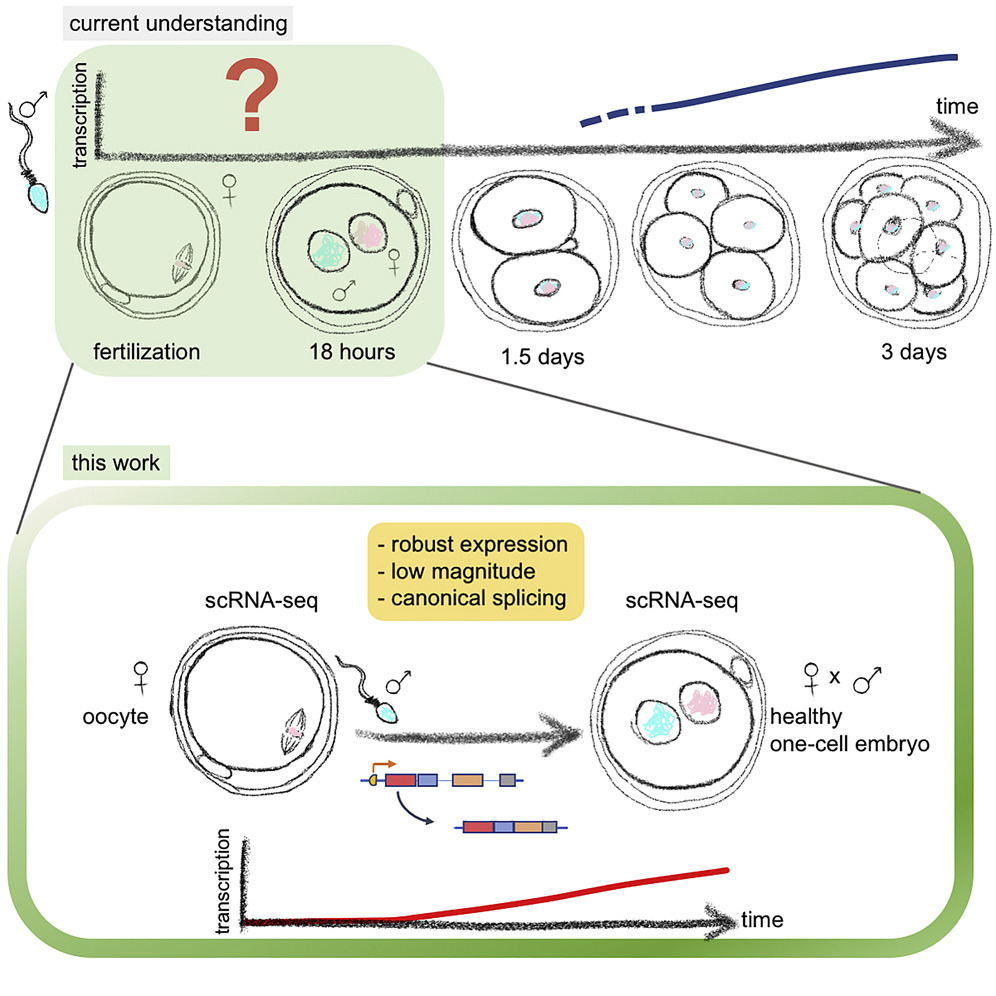 Using a method called RNA-sequencing, the team applied precision analysis to individual human eggs and one-cell embryos to make a detailed inventory of tell-tale products of gene activity, called RNA transcripts. It revealed that hundreds of genes awaken in human one-cell embryos. Because the gene activity starts small, previous techniques had not been sensitive enough to detect it. But state-of-the art RNA-sequencing used in this study was able to reveal even small changes.

“This is the first good look at the beginning of a biological process that we all go through – the transit through the one-cell embryo stage,” said Professor Perry, from the Department of Biology and Biochemistry at Bath. “Without genome awakening, development fails, so it’s a fundamental step.”

The team found that many genes activated in one-cell embryos remain switched on until the four-to-eight cell stage, at which point they are switched off.

“It looks as if there is a sort of genetic shift-work in early embryos: the first shift starts soon after fertilisation, in one-cell embryos, and a second shift takes over at the eight-cell stage,” said Professor Perry.

What human genome awakening tells us

At the moment of human fertilisation, sperm and egg genomes – the collection of all of their genes – are inactive: the sperm and egg rely on transcripts produced when they were being formed for instructions that regulate their characteristics.

Transcripts provide essential instructions in all cells, and embryo cells are no exception. This means that it is essential for parental (sperm and egg) genomes to awaken in the new embryo. But when and how does this happen?

Understanding the process of genome awakening is important: it is a key piece of the jigsaw of development that promises a better understanding of disease, inheritance and infertility. The scientists found some activated genes that might be expected to play roles in early embryos, but the roles of others were unknown and could point to embryonic events that we don’t yet understand.

The team’s findings also shine a light on how the genes are activated.

“Although the trigger for activation is thought to come from the egg, it’s not known how; now we know which genes are involved, we can locate their addresses and use molecular techniques to find out,” said Professor Perry.

The link with cancer

Remarkably, candidates that might trigger gene activation include factors usually associated with cancer, such as some well-known oncogenes. This led the researchers to speculate that the natural, healthy role of factors that are known to misbehave in cancer, is to awaken genes in one-cell embryos. If this proves to be correct, the team’s findings could illuminate events that initiate cancer, providing new diagnostic and preventive opportunities.

The findings also have clinical implications for the inheritance of acquired traits, such as obesity: parents who gain weight seem to pass the trait to their kids. It is not known how such acquired traits are transmitted, but altering gene activation after fertilisation is a possible mechanism.

As Dr Yeo from the Medical Research Council Metabolic Diseases Unit at Cambridge suggests, “If true, we should be able to see this altered gene activation signature at the one cell stage.”

The team also looked at unhealthy one-cell embryos that do not go on to develop, and found that many of their genes fail to activate. Abnormal embryos have been used to evaluate methods of human heritable genome editing, but the new findings suggest they may be inappropriate as a reliable test system.