Based on their findings, published today in Nature Medicine, the researchers developed and validated a gene expression signature capable of predicting patient survival better than other clinical features. If validated in prospective studies, this tool may be useful in stratifying patients with gastric cancer and directing them for more effective treatment strategies.

“In order to better treat patients with PC, we first have to understand the populations of metastatic cells in the peritoneal cavity,” said co-corresponding author Linghua Wang, M.D., Ph.D., assistant professor of Genomic Medicine. “This is the most detailed analysis of these cells performed to date. That is the power of single-cell analysis – we are able to look at every single cell and get a picture of the landscape.”

Peritoneal carcinomatosis is a condition in which cancer cells infiltrate and invade the peritoneal, or abdominal, cavity, adhering to the stomach and other organs. This can occur with other gastrointestinal cancers but is most commonly seen in patients with advanced gastric cancers, with roughly 45% of patients diagnosed with PC at some point. The condition leads to significant fluid accumulation in the abdominal cavity, and patients have an overall survival of less than six months.

“PC represents a major unmet clinical need, as we don’t have effective treatment options available for these patients,” said co-corresponding author Jaffer Ajani, M.D., professor of Gastrointestinal Medical Oncology. “Based on our findings, we need to move toward profiling these cells in each patient in order to offer more tailored treatment options.”

After performing single-cell RNA sequencing to analyze gene expression, the researchers were able to build the first “map” of PC cells, which describes the variety of cell types present and their functional states. The variability of cancer cells present within a tumor is known as intratumor heterogeneity, and it can lead to treatment failure and recurrence as distinct subtypes of cancer cells will respond differently to a given therapy. 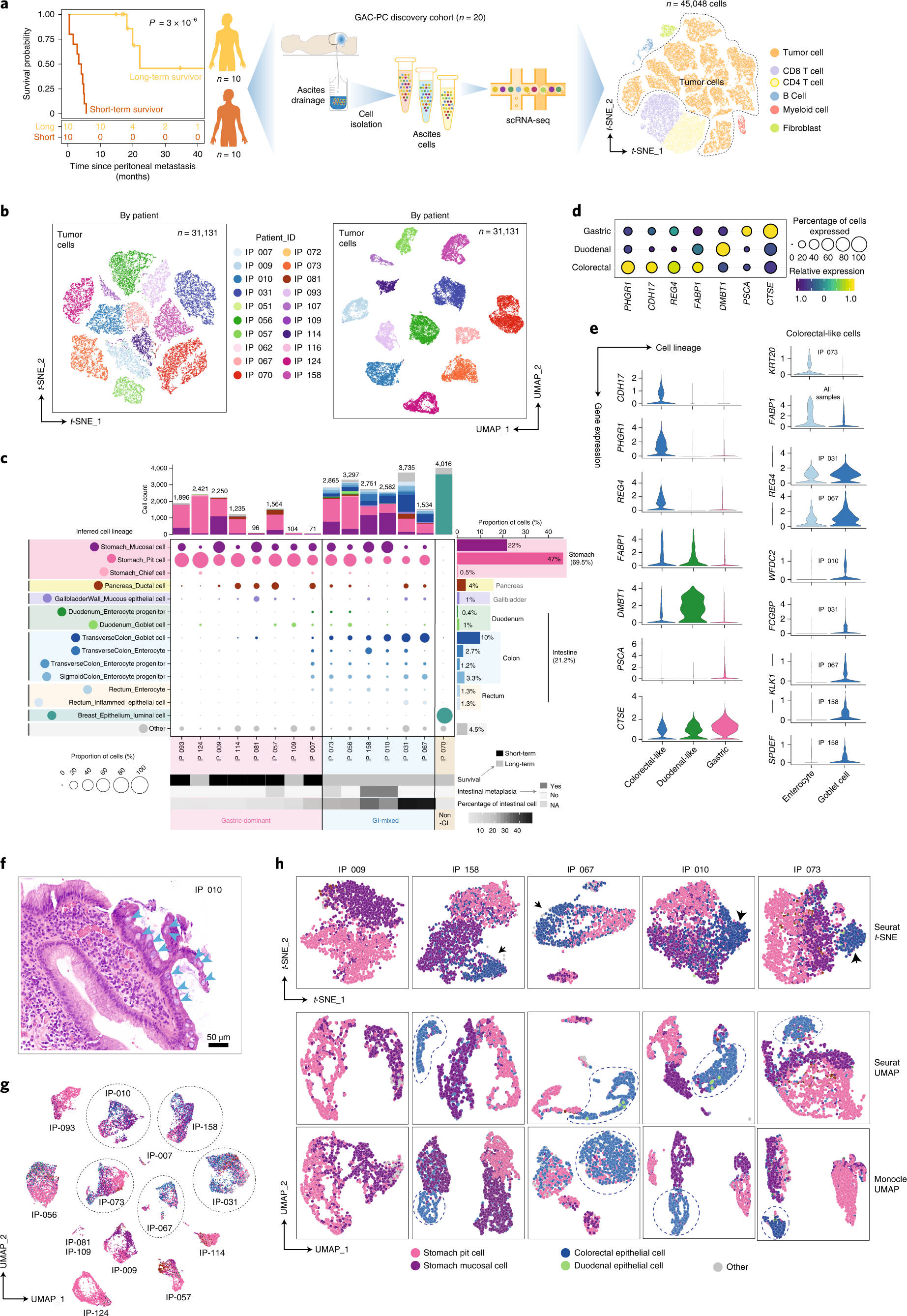 The gene expression information also enabled the researchers to determine the origins of the PC cells, known as tumor cell lineage. They discovered that, although these were all gastric cancer cells, some appeared to originate from cells of the stomach while others more closely resembled cells of the intestine.

“The intriguing aspect is that, by classifying tumor cells based on lineage compositions, we noted two groups of patients,” Wang said. “The more gastric-like PC cells had an aggressive phenotype and were associated with shorter survival. However, the more intestine-like PC cells were less aggressive, and patients had longer survival.”

Based on these findings, the researchers developed a gene signature which robustly predicted patient survival better than various clinical features. They validated the signature in a second cohort of patients with advanced gastric cancer and PC and four large-scale localized gastric cancer cohorts totaling more than 1,300 patients.

Going forward, the researchers hope to validate the signature in prospective studies and to perform further analyses of PC cells in more patients to identify regulatory mechanisms of tumor cell lineage plasticity and new therapeutic targets that can be exploited to provide better treatment options for patients.

“This is an important first step toward a better understanding of the single-cell biology of these cancer cells, but we have more work to do,” Ajani said. “We foresee that understanding this heterogeneity could one day be used to guide clinical decision making that is most beneficial to each patient.”