The transcriptional programs that govern hematopoiesis have been investigated primarily by population-level analysis of hematopoietic stem and progenitor cells, which cannot reveal the continuous nature of the differentiation process. Here researchers from the Sanger Institute-EBI applied single-cell RNA-sequencing to a population of hematopoietic cells in zebrafish as they undergo thrombocyte lineage commitment. By reconstructing their developmental chronology computationally, they were able to place each cell along a continuum from stem cell to mature cell, refining the traditional lineage tree. The progression of cells along this continuum is characterized by a highly coordinated transcriptional program, displaying simultaneous suppression of genes involved in cell proliferation and ribosomal biogenesis as the expression of lineage specific genes increases. Within this program, there is substantial heterogeneity in the expression of the key lineage regulators. Overall, the total number of genes expressed, as well as the total mRNA content of the cell, decreases as the cells undergo lineage commitment. 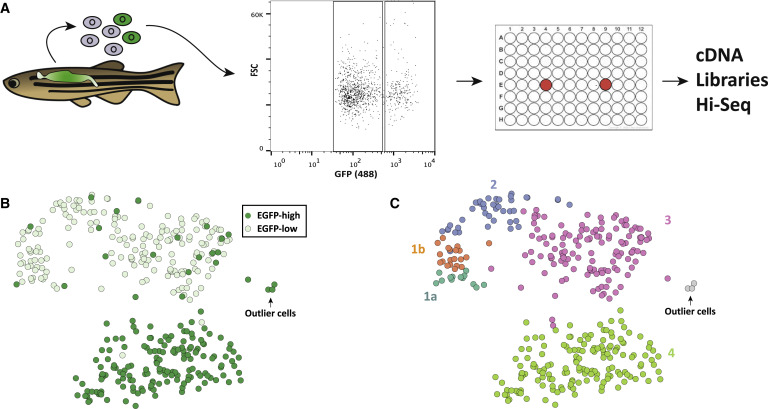 (A) A single kidney, from a heterozygote Tg(cd41:EGFP) reporter fish, was dissected and carefully passed through a strainer. Using flow cytometry, EGFPlow and EGFPhigh cells were identified and 188 cells from each population were index sorted. Two wells (in red) per plate were left without cells. RNA from each cell was isolated and used to construct a single mRNA-seq library per cell, which was then sequenced using Hi-seq.

(B) t-SNE plot of the RNA-seq data from 363 EGFPlow and EGFPhigh cells.

(C) The same t-SNE plot (as shown in B) but with points colored based on the cluster the cells belong to. Clusters are labeled as 1a, 1b, 2, 3, 4, and outlier cells.