in Commentary, Publications 13 days ago 484 Views

A new study identifies cells that are the most vulnerable within a brain structure involved in mood and movement. 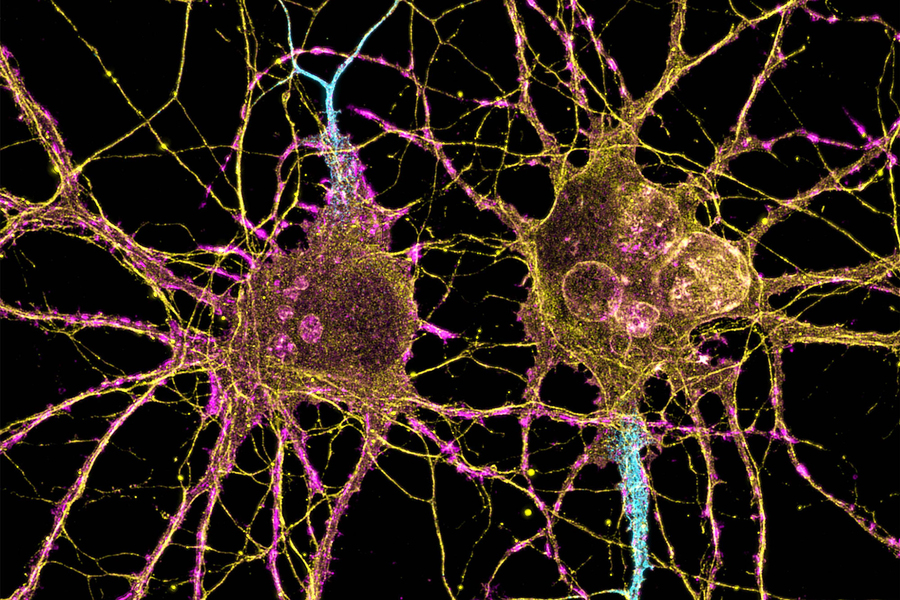 In patients with Huntington’s disease, neurons in a part of the brain called the striatum are among the hardest-hit. Degeneration of these neurons contributes to patients’ loss of motor control, which is one of the major hallmarks of the disease.

Neuroscientists at MIT have now shown that two distinct cell populations in the striatum are affected differently by Huntington’s disease. They believe that neurodegeneration of one of these populations leads to motor impairments, while damage to the other population, located in structures called striosomes, may account for the mood disorders that are often seen in the early stages of the disease.

“As many as 10 years ahead of the motor diagnosis, Huntington’s patients can experience mood disorders, and one possibility is that the striosomes might be involved in these,” says Ann Graybiel, an MIT Institute Professor, a member of MIT’s McGovern Institute for Brain Research, and one of the senior authors of the study.

Using single-cell RNA sequencing to analyze the genes expressed in mouse models of Huntington’s disease and postmortem brain samples from Huntington’s patients, the researchers found that cells of the striosomes and another structure, the matrix, begin to lose their distinguishing features as the disease progresses. The researchers hope that their mapping of the striatum and how it is affected by Huntington’s could help lead to new treatments that target specific cells within the brain.

This kind of analysis could also shed light on other brain disorders that affect the striatum, such as Parkinson’s disease and autism spectrum disorder, the researchers say.

Myriam Heiman, an associate professor in MIT’s Department of Brain and Cognitive Sciences and a member of the Picower Institute for Learning and Memory, and Manolis Kellis, a professor of computer science in MIT’s Computer Science and Artificial Intelligence Laboratory (CSAIL) and a member of the Broad Institute of MIT and Harvard, are also senior authors of the study. Ayano Matsushima, a McGovern Institute research scientist, and Sergio Sebastian Pineda, an MIT graduate student, are the lead authors of the paper, which appears in Nature Communications.

Huntington’s disease leads to degeneration of brain structures called the basal ganglia, which are responsible for control of movement and also play roles in other behaviors, as well as emotions. For many years, Graybiel has been studying the striatum, a part of the basal ganglia that is involved in making decisions that require evaluating the outcomes of a particular action.

Many years ago, Graybiel discovered that the striatum is divided into striosomes, which are clusters of neurons, and the matrix, which surrounds the striosomes. She has also shown that striosomes are necessary for making decisions that require an anxiety-provoking cost-benefit analysis.

In a 2007 study, Richard Faull of the University of Auckland discovered that in postmortem brain tissue from Huntington’s patients, the striosomes showed a great deal of degeneration. Faull also found that while those patients were alive, many of them had shown signs of mood disorders such as depression before their motor symptoms developed.

To further explore the connections between the striatum and the mood and motor effects of Huntington’s, Graybiel teamed up with Kellis and Heiman to study the gene expression patterns of striosomal and matrix cells. To do that, the researchers used single-cell RNA sequencing to analyze human brain samples and brain tissue from two mouse models of Huntington’s disease.

The analysis of RNA expression in each of these types of cells revealed that striosomal neurons are harder hit by Huntington’s than matrix neurons. Furthermore, within the striosomes, D2 neurons are more vulnerable than D1.

The researchers also found that these four major cell types begin to lose their identifying molecular identities and become more difficult to distinguish from one another in Huntington’s disease.

The findings suggest that damage to the striosomes, which are known to be involved in regulating mood, may be responsible for the mood disorders that strike Huntington’s patients in the early stages of the disease. Later on, degeneration of the matrix neurons likely contributes to the decline of motor function, the researchers say.

In future work, the researchers hope to explore how degeneration or abnormal gene expression in the striosomes may contribute to other brain disorders.

Previous research has shown that overactivity of striosomes can lead to the development of repetitive behaviors such as those seen in autism, obsessive compulsive disorder, and Tourette’s syndrome. In this study, at least one of the genes that the researchers discovered was overexpressed in the striosomes of Huntington’s brains is also linked to autism.

Additionally, many striosome neurons project to the part of the brain that is most affected by Parkinson’s disease (the substantia nigra, which produces most of the brain’s dopamine).

“There are many, many disorders that probably involve the striatum, and now, partly through transcriptomics, we’re working to understand how all of this could fit together,” Graybiel says.