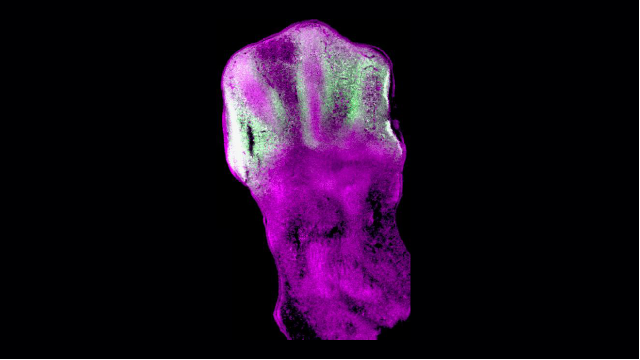 The reconstructed 20X image above (from 54 adjacent photos) represents a section through a developing mouse embryonic arm and hand. All cells are stained in magenta superimposed with a green signal in the cells expressing the mRNA of Hoxd13 gene, one of the five architect gene participating in the formation of the fingers. Credit: Pierre Fabre and Jessica Dessimoz, EPFL

When a fetus develops, everything must be timed to perfection: cell division and differentiation, gene expression, cell-to-cell signaling, and morphogenesis must be carefully coordinated to occur in the correct sequence and for the proper amount of time. Failures in timing can result in congenital deformities, disabilities, and even death.

The big question that developmental biologists have been asking for a long time is this: what sets the pace and the order of developmental events?

Looking at the development of the paw and digits in mice, scientists from the lab of Denis Duboule at EPFL, with Pierre Fabre at the University of Geneva, have now discovered a “code” of architect genes that play a central role in the developmental cascade. The genes belong to the Hoxd group, developmental genes that are active in various combinations inside so-called “progenitor” cells – cells that are just a step more specialized than stem cells.

By pushing a cutting-edge single-cell RNA sequencing technique to its maximal resolution, the scientists were able to study the expression patterns of thousands of genes inside single progenitor cells. The analysis showed that each cell contains 343 genes that are associated with specific cellular states, many of which are involved in the packaging and ordering of DNA in the cell, as well as patterning how the paw’s fingers will develop.

The scientists identified a very restricted set of six main combinations of five Hoxd genes (Hoxd9, 10, 11, 12 and 13) in the development of digits in mice. Each combination includes one, two, or four of the genes, with the simplest (one gene) at the beginning of development and the more complex (four genes) combination occurring at the later stages of maturation.

The pattern by which Hox genes are expressed when they “build” the entire body – in both mice and humans – has been known and studied for over thirty years. But most of that information comes from looking at entire tissues of developing organs. In contrast, this study is the first to look at it in single cells, offering a higher resolution and clarity in the way Hox genes orchestrate the rhythm of development.

“The study shows how architect genes act in concert, following a gradual progression in every developing cell to generate our fully mature arms and hands at the right time and the right place,” says Pierre Fabre. “The Hoxd gene combinations provide a machinery that generate a spectrum of functionally different cells within genetically-defined classes of limb patterning motifs. This will pave the way for future genetic work to understand how cells get to synchronize the combined activation of multiple genes.”