SiPAS – boosting the power of transcriptomics

Scientists at the Institute of Genetics and Developmental Biology of the Chinese Academy of Sciences have developed a simplified and highly efficient 3’RNA-seq method, called Simplified Poly(A) Anchored Sequencing (SiPAS), to boost population transcriptomics in plants. The study was recently published in Plant Biotechnology Journal.

RNA sequencing (RNA-seq) is a keystone technology for modern biological research, shifting many genomic studies from a solely genomic level to a multi-omic level and thus effectively improving our understanding of genome biology. Over the last a few years, vast amounts of genomic data have been generated in many plant species. The gigantic size of genomic data is creating a vacuum where a large quantity of transcriptomic data needs to be filled to help decode the function of the genome. Highly efficient RNA-seq technologies are increasingly demanded in biological research.

The emergence of 3’RNA-seq is a giant leap of RNA-seq technologies. Active methodological development has been made to the 3’RNA-seq technology. However, these 3’RNA-seq methods usually use custom sequencing format and have not been sufficiently optimized for the standard paired-end 150/250 bp (PE150 or PE250) sequencing. This hinders their application in large-scale population transcriptomic study.

Through testing SiPAS for its performance in bread wheat, they presented evidence showing that SiPAS achieves a high level of sensitivity, accuracy, and reproducibility.

According to the researchers, the improved 3’RNA-seq method SiPAS provides multiple strengths to advance population transcriptomic studies in plants. It is effortless and cost-effective with the simplified workflow. In addition, it is highly effective in quantifying gene expression and it is robust to RNA degradation.

Overall, with the strengths of being cost-effective and laborsaving, and equivalent performance with TruSeq, SiPAS promises the ease of use of this method in large-scale population transcriptomic studies. It is anticipated that SiPAS will be used in many species and contribute to an in-depth understanding of plant genomes. 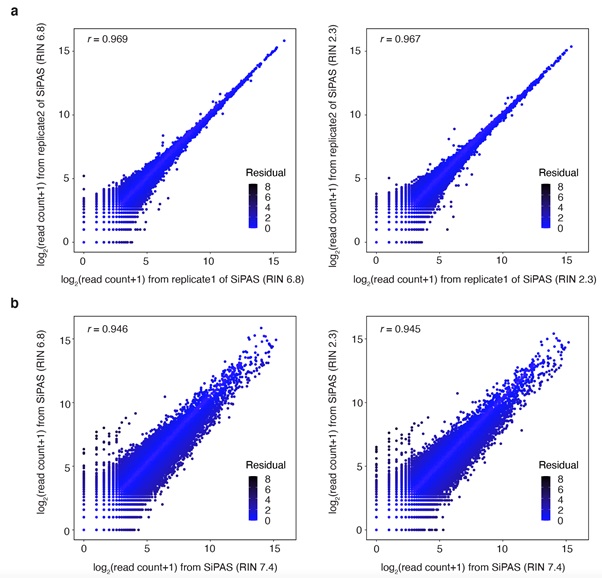 The performance of SiPAS on degrading RNA library. (Image by IGDB)

Source – The Chinese Academy of Sciences