The preparation of small RNA cDNA sequencing libraries depends on the unbiased ligation of adapters to the RNA ends. Small RNA with 5′ recessed ends are poor substrates for enzymatic adapter ligation, but this 5′ adapter ligation problem can go undetected if the library preparation steps are not monitored. Here researchers from the City College of New York illustrate the severity of the 5′ RNA end ligation problem using several pre-miRNA-like hairpins that allow them to expand the definition of the problem to include 5′ ends close to a hairpin stem, whether recessed or in a short extension. The ribosome profiling method can avoid a difficult 5′ adapter ligation, but the enzyme typically used to circularize the cDNA has been reported to be biased, calling into question the benefit of this workaround. Using the TS2126 RNA ligase 1 (a.k.a. CircLigase) as the circularizing enzyme, the researchers devised a bias test for the circularization of first strand cDNA. All possible dinucleotides were circle-ligated with similar efficiency. To re-linearize the first strand cDNA in the ribosome profiling approach, they introduce an improved method wherein a single ribonucleotide is placed between the sequencing primer binding sites in the reverse transcriptase primer, which later serves as the point of re-linearization by RNase A. They incorporate this step into the ribosomal profiling method and describe a complete improved library preparation method, Coligo-seq, for the sequencing of small RNA with secondary structure close to the 5′ end. This method accepts a variety of 5′ modified RNA, including 5′ monophosphorylated RNA, as demonstrated by the construction of a HeLa cell microRNA cDNA library. 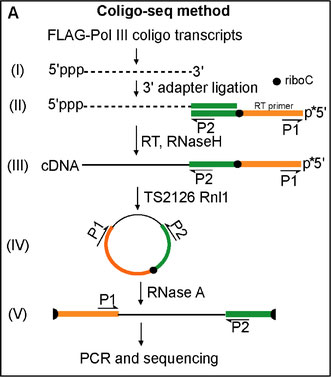