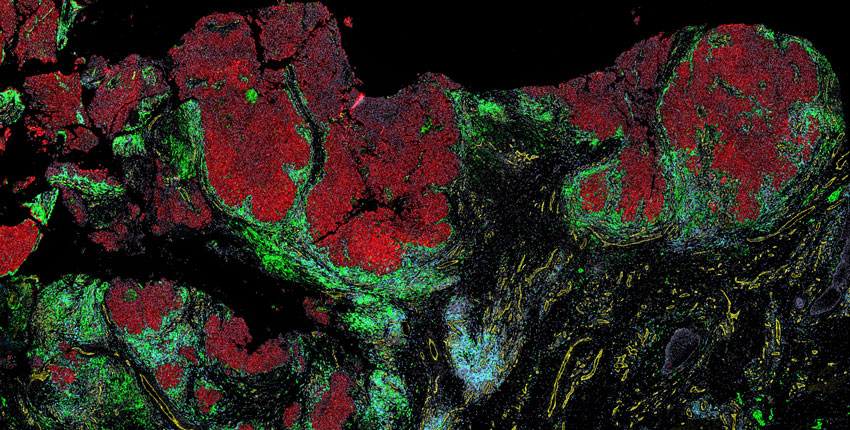 Melanoma is a somewhat unusual cancer—one that blooms before our very eyes, often on sun-exposed skin, and can quickly become deadly as it turns our own skin against us and spreads to other organs.

Fortunately, when caught early, melanoma can often be cured by simple surgery, and there are now better treatments for advanced cases, including immunotherapies that prime a patient’s immune system to fight off the cancer.

However, much remains unknown about melanoma, including the details of how it develops in the earliest stages, and how to best identify and treat the most dangerous early cases.

Now, a team at Harvard Medical School has created spatial maps at the single-cell level that reveal, in unprecedented detail, how melanoma cells and nearby cells, including immune cells, interact as a tumor develops.

The maps, described in Cancer Discovery, offer insights into how interactions between cells change as melanoma advances, and how cancer cells suppress the immune system as they take over.

“The main purpose was to understand the early events in melanoma that lead to the development of a tumor,” said lead author Ajit Nirmal, a research fellow at Harvard Medical School.

The HMS team is building the maps into a melanoma atlas that will be freely available to the scientific community as part of the National Cancer Institute’s Human Tumor Atlas Network. They hope that eventually, the atlas can serve as a jumping-off point for scientists to study how to prevent melanoma and how to treat it in its nascent stages before it becomes full-blown cancer. The ultimate goal of these efforts is to aid doctors in diagnosing melanoma and to help them prescribe tailored treatment based on each patient’s individual tumor profile.

“This was an opportunity to study melanoma at its inception, and collect a resource of information that we can share with the community,” said Sandro Santagata, an HMS associate professor of pathology at Brigham and Women’s Hospital and co-senior author on the paper with Peter Sorger, the HMS Otto Krayer Professor of Systems Pharmacology.

In recent years, a considerable amount of melanoma research has focused on two areas: DNA sequencing of early tumor samples to understand the genetic changes that occur as this particular cancer arises and single-cell RNA sequencing of the tumor’s immediate surroundings—the so-called tumor microenvironment—to profile the types of cells present. However, researchers have remained largely in the dark about how tumor cells and nearby cells are physically arranged in space, and how these cells interact on a molecular level as melanoma develops.

“What we still do not know is how the microenvironment is organized to allow a tumor to grow,” Nirmal said. “In theory, immune cells are supposed to identify tumor cells and kill them off very quickly, but clearly something has gone wrong, and that’s one of the primary reasons why we want spatial resolution.”

Such spatial resolution, along with fine-scale molecular data, became possible to achieve only recently with the advent of more advanced single-cell imaging technologies, including cyclic immunofluorescence, or CyCIF, a multiplexed imaging technique developed by the Sorger lab.

In the new paper, the researchers combined CyCIF imaging data with 3D high-resolution microscopy and fine-scale RNA sequencing to create maps capturing where cells are located and how they interact as normal tissue morphs into melanoma.

“We’re able to see everything from normal skin to early lesions to invasive melanoma, sometimes all in one piece of tissue,” Santagata said. “You end up with this map of how melanoma is developing right in front of you.”

Specifically, the maps showed that in the earliest stages of melanoma, so-called precursor lesions were composed of similar types and proportions of cells as normal skin, but these cells had a drastically different pattern of interaction, which included signs of immunosuppression.

“This indicates that there’s probably some level of restructuring within the tumor microenvironment that could potentially aid the development of the tumor,” Nirmal said.

In early melanoma, PD-L1—a protein that suppresses the immune system and allows cancer to flourish—was not expressed in tumor cells but was present in adjacent immune cells called myeloid cells. As the tumor grew, PD-L1-expressing myeloid cells interacted increasingly with T cells primed to kill tumor cells. This interaction between immune cells, rather than between cancer cells and immune cells, may be a mechanism the cancer uses to tamp down the immune system so it can progress unchecked.

“That may mean that the immune system is being suppressed, or inactivated, by itself, and not directly by the cancer,” Sorger said.

Immunotherapies that inhibit PD-L1 and its binding partner PD-1 and thereby unleash the immune system against the tumor have revolutionized treatment for advanced melanoma. However, not all patients with melanoma respond, and these therapies have not been as effective at treating some other cancers. Thus, Sorger hopes that basic research on PD-L1 expression will provide a foundation for understanding which patients with melanoma are most likely to benefit from immunotherapies and how scientists can make the therapies work in more cancers. The insights may also illuminate therapeutic strategies for melanomas that remain resistant to available treatments.

In more advanced melanoma, the state of the cancer cells differed depending on their physical location. Cells in the middle of a tumor that were surrounded by other cancer cells behaved markedly differently from cells on the outer edges of the tumor that could interact with nearby immune cells and stromal cells. This finding suggests that this cellular mixed bag—known as tumor heterogeneity—may partly be due to epigenetic changes that occur in tumor cells as they interact with other cell types, Nirmal said. Understanding tumor heterogeneity is important, he added, for understanding why and how some parts of a tumor survive treatment, while others do not, especially in the context of therapies that target specific molecular pathways.

Taken together, the findings demonstrate that “these local environments involve many more physical interactions between cells than we might have thought,” Sorger said. “The cells are actually in an incredibly dense, communicating network.”

“The neighborhoods of the tumor cells and the interactions between cells tell us how the tumor may progress, and that’s an entirely new form of biomarker that hasn’t been applied before,” Santagata added. “With these new spatial maps, we have the ability to link cellular interactions with physiologic behavior, and, eventually, clinical outcomes.”

With the paper, the researchers are releasing the largest imaging-based melanoma dataset to date—and the entire dataset will be freely available through Minerva, an online visualization tool the lab developed to make complex data easier to understand and use. Now, the team is working on adding more melanoma samples to the project, with the goal of gaining a better understanding of which features and interactions can be considered typical.

“We want to be able to say what happens recurrently, rather than idiosyncratically. Quantity has a quality all its own, and so scaling this is a critical step,” Sorger said.

The researchers are building the maps into an open-source melanoma atlas within the Human Tumor Atlas Network that captures the full range of molecular interactions between cells in different stages of disease. They envision the atlas having a similar impact as earlier atlases of cancer genomics, including The Cancer Genome Atlas. Ultimately, they hope that their work will propel novel insights in melanoma that lead to precision-targeted individualized treatments based on a patient’s tumor characteristics.

“There is no precision medicine without diagnostics,” Sorger said, yet 85 to 90 percent of cancers are diagnosed based on tissue samples alone.

He thinks the process of diagnosing and treating melanoma could be improved by incorporating multiplexed imaging techniques, like CyCIF, that provide fine-scale molecular information about the tumor ecosystem and comparing results to a melanoma atlas.