In recent years, scientists who study gene expression in cells have used a method that essentially pins a tail on RNA and tracks their whereabouts. However, certain types of RNA evade the process. Now, a Cornell team has developed a way to tag these molecules, enabling researchers to spatially map the entire spectrum of RNA in a cell’s transcriptome.

The method, spatial total RNA-sequencing (STRS), has revealed the role of previously elusive RNA in skeletal muscle regeneration and viral myocarditis in mice.

The team’s paper, “Spatial Mapping of the Total Transcriptome by In Situ Polyadenylation,” published Nov. 3 in Nature Biotechnology. The lead author is doctoral student David McKellar, who works jointly in the labs of co-senior authors Iwijn De Vlaminck and Ben Cosgrove, both associate professors of biomedical engineering in the College of Engineering.

In order to better understand how gene expression drives different kinds of biological phenomena, the researchers use a technique called spatial transcriptomics, which measures the RNA in a tissue sample and maps the location of its activity. Spatial transcriptomics does this by cleverly leveraging the organic process by which a cell adds a polyadenylated (poly-A) tail to an RNA when it is transcribed in the nucleus. RNAs are snared by their poly-A tail, then they are sequenced and computationally mapped back to their spatial position. This commonly occurs for messenger RNAs, but there are other types, such as noncoding RNAs, that never get a poly-A tail. Since they are difficult to map, and therefore study, noncoding RNAs are a “kind of dark matter of the transcriptome,” according to McKellar. 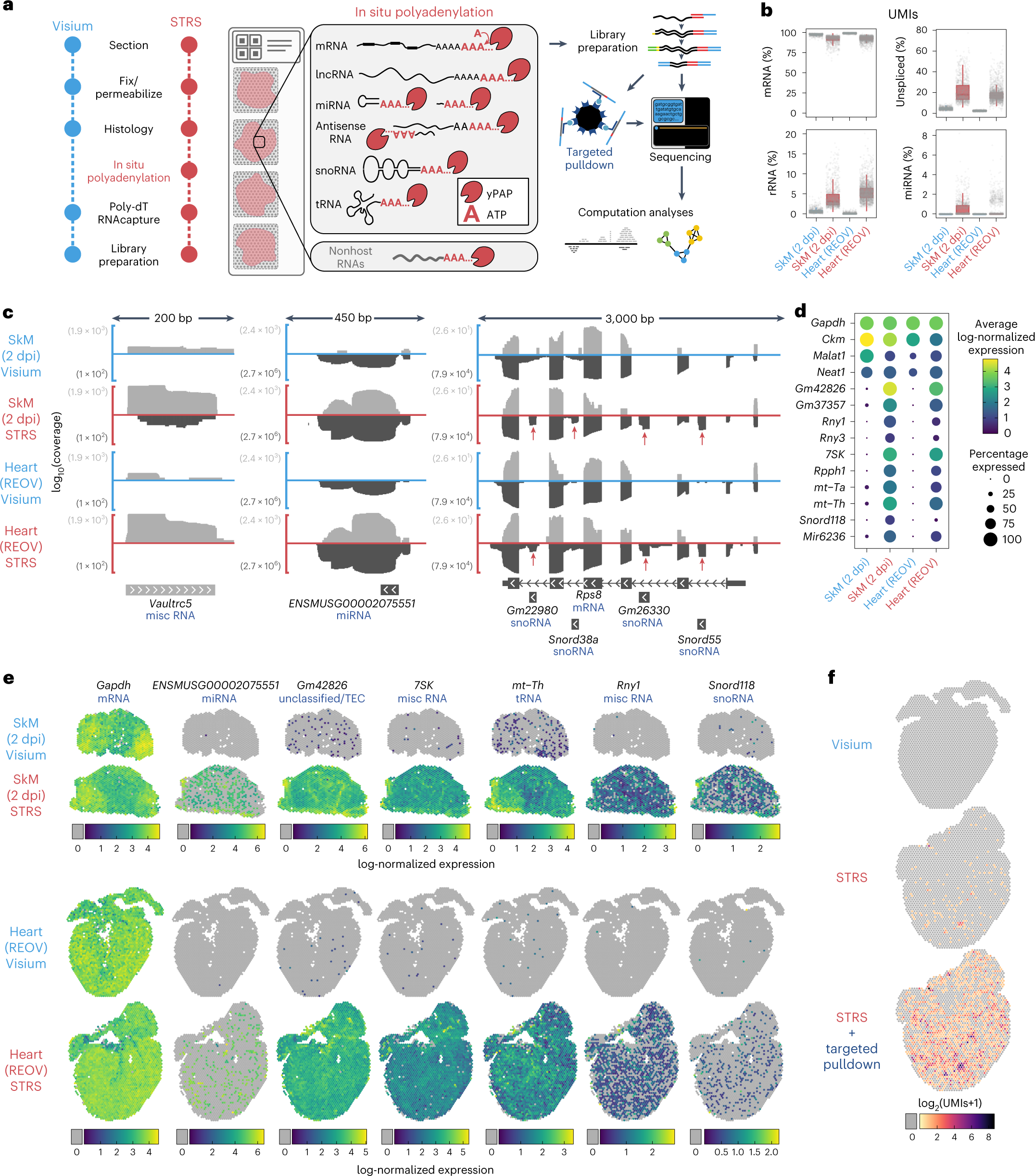 a, Workflow for STRS. b, Comparison of select RNA biotypes between Visium and STRS datasets. The y axis shows the percent of UMIs for each spot. The box shows median and quartile values, and whiskers show 1.5 times interquartile range. c, Detection of coding and noncoding RNAs between Visium and STRS workflows. Color scale shows average log-normalized UMI counts. Dot size shows the percentage of spots in which each RNA was detected. d, Log10-transformed coverage of deduplicated reads mapping to sense (light gray) and antisense (dark gray) strands at the Vaultrc5, ENSMUSG00002075551 and Rps8 loci. Annotations shown are from GENCODE M28 and include one of the five isoforms for Rps8 as well as the four intragenic features within introns of Rps8. e, Spatial maps of coding and noncoding transcripts for Visium and STRS workflows. Spots in which the transcript was not detected are shown as gray. Color scale indicates log-normalized expression. f, Detection of REOV transcripts using the standard workflow, STRS and STRS with targeted pulldown enrichment. Spots in which the virus was not detected are shown as gray.

McKellar was inspired to improve this approach after observing the work of his co-author and fellow doctoral student Madhav Mantri, who, in research recently published in Nature Cardiovascular Research, used two forms of transcriptomics – single-cell and spatial – to create a high-resolution transcriptome map of reovirus-induced myocarditis, i.e., inflammation of heart muscle, in mice. By doing so, Mantri was able to document the role that inflamed endothelial cells play in viral infection response.

“I saw that he was studying these viral RNAs, but he wasn’t able to see where the virus was,” McKellar said. “He had to infer that based on the host gene expression response.”

McKellar and his collaborators discovered that by applying an enzyme, poly-A polymerase, they could add adenine bases to every RNA, even the wilier ones.

In a series of experiments, the team used STRS to show how noncoding RNAs regulate skeletal muscle regeneration. They also demonstrated that STRS can spatially map the infection of viral non-host RNAs, in myocarditis, and also the host’s tissue response, simultaneously, with a single measurement.

”David came up with a simple trick to solve a common problem in spatial transciptomics,” De Vlaminck said. “It’s neat that his method only adds a single, inexpensive step to commercially available protocols. We hope that other groups will be inspired by this and will be able to adopt David’s method quickly.”

Now that they are able to spatially map any kind of RNA, the team anticipates using STRS to analyze other biological systems, such as bacteria in the microbiome, other viral diseases and possibly, by tweaking the technology, certain forms of bacteria-associated cancer. The researchers are also planning to develop higher resolution technologies to see what genes are expressed in individual cells, and how the gene expression varies spatially. Perhaps most importantly, because STRS piggybacks off widely used spatial RNA-sequencing, the new method can be broadly and quickly adopted by other researchers.

“There are hundreds or thousands of genes that are just not detected by existing technologies,” McKellar said. “We’re now able to capture this whole other side of the transcriptome. But really, the exciting thing about STRS is the flexibility. Any kind of tissue, any kind of any disease really, we can now map gene expression and study the underlying biology.”

Availability – A detailed protocol for performing STRS as well as custom analysis scripts for aligning and processing STRS data can be found at https://github.com/mckellardw/STRS.