From ASBMB Today by Laurel Oldach

Single-cell RNA sequencing is becoming a workhorse of transcriptomics, giving researchers details on transcription in individual cells and a sense of both tissue-level heterogeneity and how many cell types are present. As powerful as single-cell techniques are, they pose a challenge in that tissues must be dissociated to be analyzed. This can cost contextual information in tissues where a cell’s position is important.

In the brain, for example, many functions depend on interactions between adjacent cells. Based on single-cell sequencing, researchers have identified multiple types of both inhibitory and excitatory neurons in the brain and dozens of subtypes of glia, or nonneuronal cells. But to learn more about how position affects function and how this diversity of cell types arises, researchers need more information about which cells are where — a question for spatial transcriptomics.

There are several ways to assay the transcriptome without losing spatial information. Researchers can microdissect tiny, defined portions of tissues for RNA sequencing assays; they can capture nucleic acids in a known, spatially defined pattern before single-cell sequencing; or they can hybridize fluorescent probes to RNA and image it in thin tissue sections, sometimes after expanding the tissue. Scientists have struggled to strike a balance between spatial resolution and the number of transcripts they can assay at once. 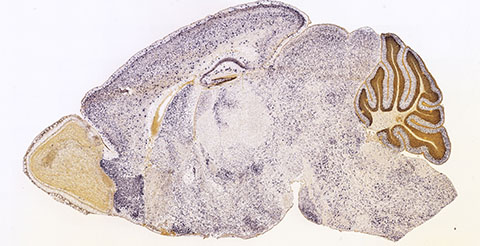 In contrast to in situ hybridization experiments like this one, which shows where in the mouse brain a single transcript is located, spatial transcriptomics experiments can give researchers information about the whereabouts of many transcripts at once.

In the journal Science, a Harvard team used a multiplexed in situ hybridization technique called MERFISH, which assays tissue slices for a selection of thousands of genes, to identify dozens of cell types in multiple regions of the mouse and human cortexes. The researchers spotted numerous interesting distinctions between the two species; for example, the human cortex is composed of a higher proportion of glia and inhibitory neurons than the mouse cortex. Human brains were also much more apt to show soma, or cell body, interactions between distinct cell types, particularly neurons and glial cells, suggesting more complex contact-mediated relationships between these cells.

In another paper in Science, researchers based at Yale and the University of Wisconsin–Madison, compared human, macaque, chimpanzee and marmoset brain regions responsible for cognition, identifying subtle differences in important genes, such as a dopamine-producing enzyme, in certain cell types by region.

These techniques have yet to capture single cells in space. However, researchers are developing ways to get closer. A method published in the journal Nature Biotechnology this year by a research team from across Europe merges expression signatures from single-cell RNA sequencing experiments with spatial transcriptomic location from a sparse subset of these transcripts. By combining the data, the method can determine which classes of cells exist in each location and which type most likely occupies a given location. Other scientists at Harvard are working on ways to determine likely boundaries between cells based on their transcriptomes.