Spiked-scRNA-seq sheds new light on the origin of metastases

Research can now target metastases more effectively thanks to a new approach that takes into account the enormous heterogeneity and phenotypes of tumour cells, with a team from UNIGE pinpointing a gene that prevents their development.

Spiked-single-cell RNA sequencing assigns phenotypes to groups of cells. Example of the mapping of a the heterogeneous population of cancer cells (in green) that is composed of two main groups. Mapping the spikes identify cells with varying metastatic potential by the differential homing of the metastatic clone (in red) to one group and of the non-metastatic clone (in blue) to the other. © UNIGE/Ariel Ruiz i Altaba

Before an effective treatment can be devised, we have to be able to understand the specific effect of an anti-cancer substance on the cell type, or even the cell, that produces metastases in the enormous cellular heterogeneity of tumours. A team from the University of Geneva (UNIGE) used a pioneering technique, spiked-scRNAseq, that links the transcriptomic to single cell metastatic phenotypes of colon cancer tumour cells. The importance of the VSIG1 gene involved in intercellular interactions has been identified: it prevents metastases. In addition to this discovery–which offers hope for developing future treatments–the article published in Cell Reports validates the use of this technology for testing drugs that are active against metastases, including for personalised approaches.

Most drug treatments for cancer do not work optimally against metastases. In fact, they have been developed to have a global action and the greatest possible effect on the average patient.

To be effective, however, “Drugs should be targeted only to cells that generate metastases,” explains Professor Ariel Ruiz i Altaba at UNIGE’s Faculty of Medicine.

Tumours are made up of cells that are very heterogeneous, some of which will produce metastases while others will not. The question is how to target the right type of tumour cells as a means to beat cancer.

The team led by Professor Ruiz i Altaba set up a methodology for defining the cellular phenotypes for tumours, as well as cloning and tracing them, using a cell-scale analysis of both the genome and the resulting mRNA expression. As a reminder, the genes of a cell, or its genotype, are first copied into messenger RNA which is then often used for protein synthesis. These proteins are the visible expression of genes, and their action underlies measurable characteristics of the cell, i.e. its phenotype.

“Our approach means it’s possible to identify the missing pieces of the tumour puzzle by linking the expressed genotype to the cellular phenotype. In essence, we want to know how cells become metastatic and where they come from.” 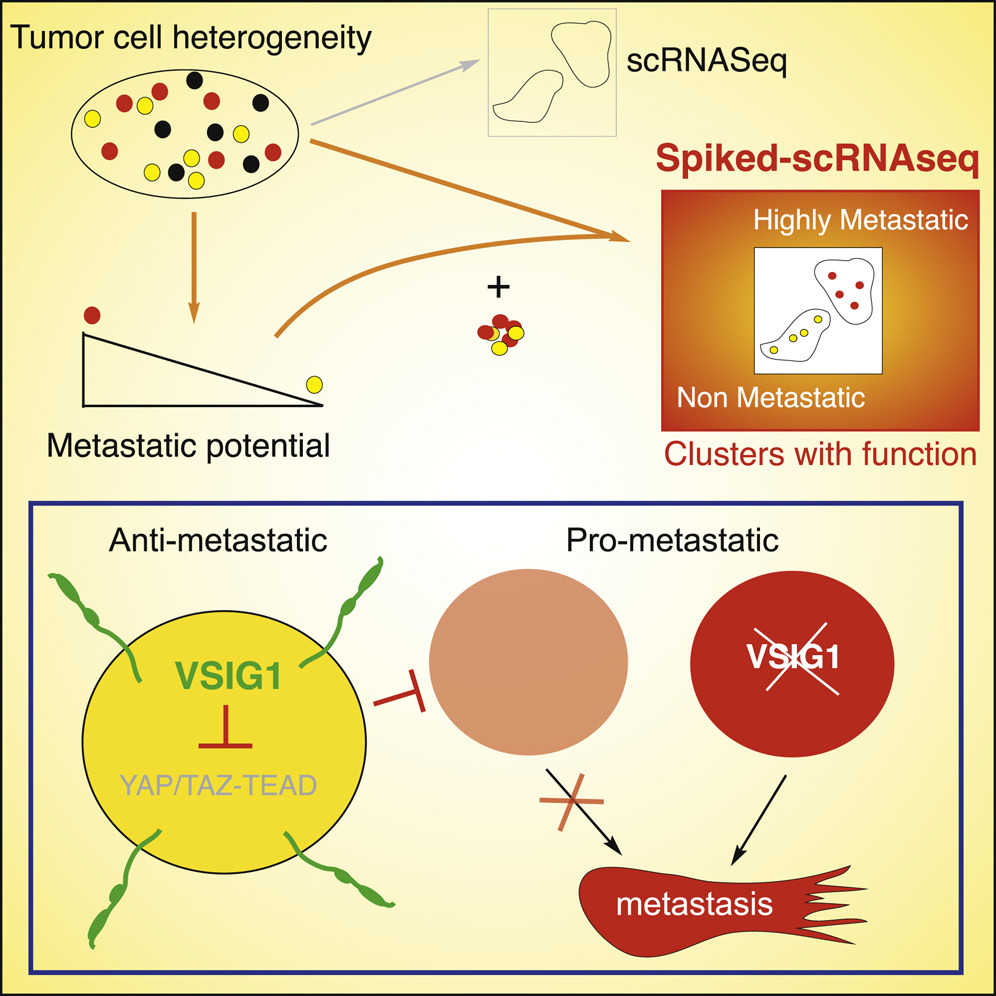 By developing and using the spiked-scRNAseq technique, which combines omic approaches and phenotype determination of single cells that are then “spiked” into the original, heterogeneous cell population, the researchers succeeded in precisely defining the composition of the tumour populations while determining their phenotype at the cellular level. To do this, they first genetically labelled several types of tumour cells so they could observe their metastatic behaviour. Once the phenotype was known, cells of the same clone were “spiked” into the heterogeneous colon cancer primary cell population and subjected to single cell sequencing. The molecular profile of cells with metastatic potential was thus identified by the homing of spiked metastatic cells to a specific cell group or cluster.

Based on this approach, drugs and their anti-metastatic effects could be precisely tested. “In other words, we can use this approach to analyse compounds for their action on the cells that generate metastasis in individual patients,” explains Dr. Marianna Silvano, a postdoctoral fellow at UNIGE and co-first author of the study.

The researchers then applied this approach to understanding tumour behaviour. “We set about defining the pre-metastatic status of a tumour and assessing its metastatic potential,” continues Dr Silvano. The Geneva research team discovered that by mixing cells that have a metastatic phenotype with non-metastatic cells, the former stopped the migration of the latter. “This indicates that restrictive cellular interactions are important in the process of metastasis formation,” explains Professor Ruiz i Altaba.

On the back of these results–and with genomic and transcriptomic analyses in hand–the research team focused on the genes involved in the signalling pathways that are important for cellular interactions. Dr Carolina Bernal, a postdoctoral fellow and co-first author of the study, identified the VSIG1 gene and she and Dr Silvano nailed it as critical of the restrictive interaction between non-metastatic and metastatic tumour cells.

“By expressing it in a tumour cell, metastases are reduced in vivo and in vitro. If it’s removed, we find an increase in metastases,” concludes Dr Silvano.

Metastatic cells in primary tumours can be pinpointed with spiked-scRNAseq, and essential genes and active drugs identified to develop new and effective treatments for colon and other cancers.