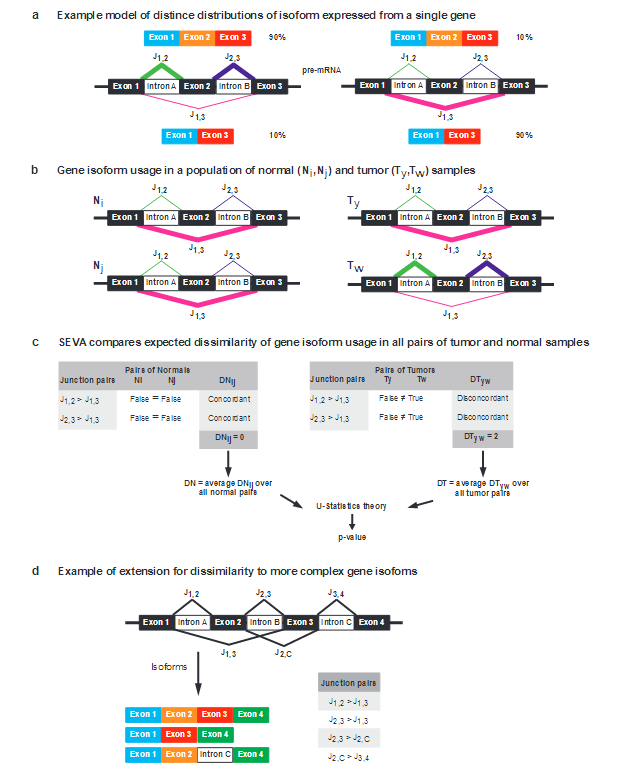 (a) Relative junction expression quantifies the distribution of isoform usage of a gene. For simplicity of this example, we show a gene with three exons. Themodel is shown for two samples of gene isoform usage: one with higher relative expression of an isoform with all three exons (left) and another with higher relative expression of an isoformthat skips the middle exon (right). The relative strength of junction expression in overlapping pairs (e.g.,J1,2withJ1,3orJ2,3withJ1,3) corresponds to the relative proportion ofisoform usage. (b) Example of gene model from (a) in multiple normal (N, left) and tumor (T, right) samples. Note that the normal samples have lower heterogeneity of gene isoform usagethan the tumor samples. (c) To quantify isoform expression, SEVA compares the expression of all pairs of overlapping junctions (see a and d). A dissimilarity measure is obtained fromthe concordance of the comparisons of pairs of overlapping junctions in each pair of samples. This measure is applied to all pairs of samples from the same phenotype (see b) and thenU-statistics theory is applied to these measures to compare the variation of gene isoform usage between the phenotypes. (d) Extension of (a) for a more complex gene splicing model.

Availability – SEVA is implemented in the R/Bioconductor package GSReg. https://bioconductor.org/packages/release/bioc/html/GSReg.html