Isoform quantification is an important goal of RNA-seq experiments, yet it remains problematic for genes with low expression or several isoforms. These difficulties may in principle be ameliorated by exploiting correlated experimental designs, such as time series or dosage response experiments. Time series RNA-seq experiments, in particular, are becoming increasingly popular, yet there are no methods that explicitly leverage the experimental design to improve isoform quantification.

Researchers from the University of Edinburgh have developed DICEseq, the first isoform quantification method tailored to correlated RNAseq experiments. DICEseq explicitly models the correlations between different RNA-seq experiments to aid the quantification of isoforms across experiments. Numerical experiments on simulated data sets show that DICEseq yields more accurate results than state-of-the-art methods, an advantage that can become considerable at low coverage levels. On real data sets, the results show that DICEseq provides substantially more reproducible and robust quantifications, increasing the correlation of estimates from replicate data sets by up to 10% on genes with low or moderate expression levels (bottom third of all genes). Furthermore, DICEseq permits to quantify the trade-off between temporal sampling of RNA and depth of sequencing, frequently an important choice when planning experiments. These results have strong implications for the design of RNA-seq experiments, and offer a novel tool for improved analysis of such data sets. 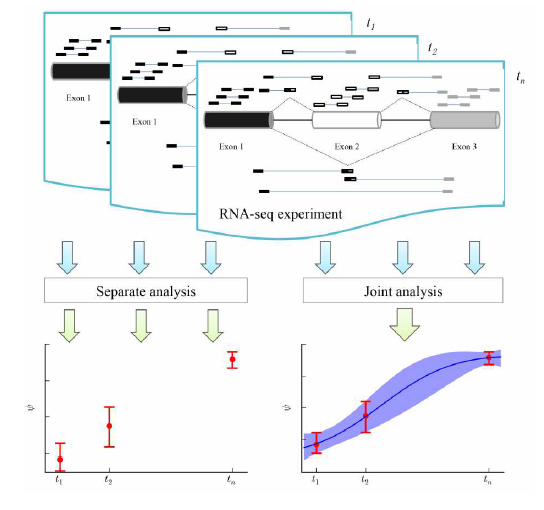 In the example gene, there are two isoforms with one alternative exon (the white one), and many paired-end reads are aligned to the genome for isoform quantification. The “separate analysis” estimate the isoform proportions for three time points independently, but the “joint analysis” estimate them together with a joint Gaussian process prior.