Researchers from The University of Texas MD Anderson Cancer Center have developed the first comprehensive framework to classify small-cell lung cancer (SCLC) into four unique subtypes, based on gene expression, and have identified potential therapeutic targets for each type in a study published today in Cancer Cell.

SCLC is known for rapid, aggressive growth and resistance to treatment, which leads to poor outcomes. While recent advances in immunotherapy and targeted therapy have improved survival for non-small cell lung cancer (NSCLC), progress for SCLC has been limited.

“For decades, small-cell lung cancer has been treated as a single disease because the tumors all look similar under the microscope, even though they behave very differently,” said Lauren Averett Byers, M.D., associate professor of Thoracic/Head & Neck Medical Oncology and senior author of the study. “Our study provides a transformative new system to define four major groups of small-cell lung cancer and, for the first time, an avenue for personalized treatment of the second most common type of lung cancer.”

Although previous research identified three possible subtypes of SCLC based on transcription factors, which indicate whether particular genes are turned “on” or “off,” a large number of SCLC tumors didn’t fit into one of the three groups. Rather than trying to apply a hypothesis to the remaining tumors, Byers’ team took an unbiased bioinformatics approach—letting the data from a large set of SCLC tumor samples speak for itself. This led to a 1,300 gene “signature” that confirmed the three previously observed groups (A, N and P), plus a previously unrecognized fourth group (I) with a unique immune landscape.

The first three groups are defined by activation of the ASCL1 (SCLC-A), NEUROD1 (SCLC-N), and POU2F3 (SCLC-P) genes. The fourth type, SCLC-I, is characterized by an inflamed gene signature with a high expression of multiple immune genes, including significantly greater levels of genes indicating the presence of CD8-positive cytotoxic T cells.

“Our paper shows that the inflamed group has a distinct biology and environment and tends to be more responsive to immunotherapy,” Byers said. “Identifying the inflamed group is very important because so far there have not been any validated biomarkers for small-cell lung cancer that predict which patients get the most benefit from immunotherapy.”

Based on recent clinical trials, immunotherapy has become part of the standard of care for SCLC. However, all clinical trials for SCLC, including those using immune checkpoint inhibitors, have had limited success. This study could help explain why, as the results suggest different classes of drugs may be more effective in specific subtypes. For example, in the samples from this study, SCLC-I was most sensitive to immune checkpoint blockade, SCLC-A to BCL2 inhibitors, SCLC-N to Aurora kinase inhibitors and SCLC-P to PARP inhibitors.

“Immunotherapy plus chemotherapy is currently the backbone of treatment for all advanced small-cell lung cancer patients, but not all patients experience the same benefit,” said Carl Gay, M.D., Ph.D., assistant professor of Thoracic/Head & Neck Medical Oncology and lead author of the study. “Our results provide an opportunity to think about immunotherapy approaches that are specific to the inflamed group, which has a very different microenvironment, separately from combination approaches that might activate the immune response in the other three groups.”

The research team first identified the four groups by applying non-negative matrix factorization to previously published data from 81 SCLC patients with surgically resected tumors. Most patients in this data set had early-stage disease, which is not typical. Because SCLC is so aggressive, it’s most often diagnosed at an advanced stage. To validate the four subtypes in late-stage disease, Byers’ team also analyzed data from 276 SCLC patients enrolled in the Phase III IMpower133 clinical trial, which established the current standard of care for advanced SCLC and represents the largest available SCLC data set to date.

“Looking at the bigger data set of what a more typical patient looks like, the four major groups came out very clearly again, including the novel inflamed group we identified,” Byers said. “We also showed that you don’t have to use the full 1,300 gene panel. We have developed immunohistochemistry tests that we’re working toward adapting for the clinic to more quickly and easily classify SCLC tumors.”

One of the known challenges of SCLC is that it often develops resistance to treatment, even after an initial response. To determine if “subtype switching” causes resistance, the authors used single-cell RNA sequencing to evaluate tumor evolution in a series of patient-derived SCLC models. The study suggests that SCLC-A tends to switch to SCLC-I after being treated with chemotherapy, which could contribute to treatment resistance. 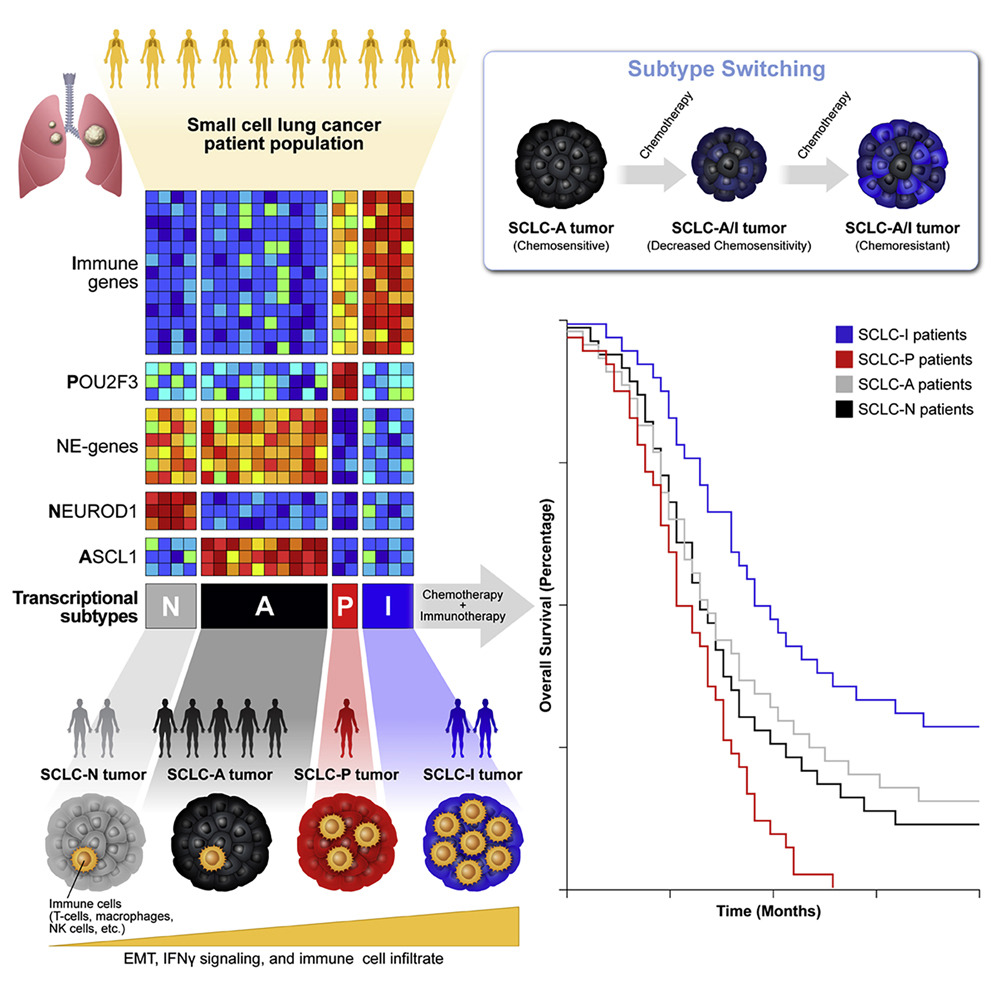 A path toward personalized treatment for SCLC

Using the SCLC subtype framework in future clinical trials will be necessary to verify the study findings, particularly regarding the therapeutic vulnerabilities for each group.

“Now we can develop more effective strategies for each group in clinical trials, taking into account that they each have different biology and optimal drug targets,” Byers said. “As a field, small-cell lung cancer is about 15 years behind non-small cell lung cancer’s renaissance of biomarkers and personalized therapies. This represents a huge step in understanding which drugs work best for which patients and gives us a path forward for personalized approaches for small-cell lung cancer.”