The arrival of RNA-seq as a high-throughput method competitive to the established microarray technologies has necessarily driven a need for comparative evaluation. To date, cross-platform comparisons of these technologies have been relatively few in number of platforms analyzed and were typically gene name annotation oriented. Here, researchers from Washington University in Saint Louis School of Medicine present a more extensive and yet precise assessment to elucidate differences and similarities in performance of numerous aspects including dynamic range, fidelity of raw signal and fold-change with sample titration, and concordance with qRT-PCR (TaqMan). To ensure that these results were not confounded by incompatible comparisons, they introduce the concept of probe mapping directed “transcript pattern”. A transcript pattern identifies probe(set)s across platforms that target a common set of transcripts for a specific gene. Thus, three levels of data were examined: entire data sets, data derived from a subset of 15,442 RefSeq genes common across platforms, and data derived from the transcript pattern defined subset of 7,034 RefSeq genes.

In general, there were substantial core similarities between all 6 platforms evaluated; but, to varying degrees, the two RNA-seq protocols outperformed three of the four microarray platforms in most categories. Notably, a fourth microarray platform, Agilent with a modified protocol, was comparable, or marginally superior, to the RNA-seq protocols within these same assessments, especially in regards to fold-change evaluation. Furthermore, these 3 platforms (Agilent and two RNA-seq methods) demonstrated over 80 % fold-change concordance with the gold standard qRT-PCR (TaqMan). 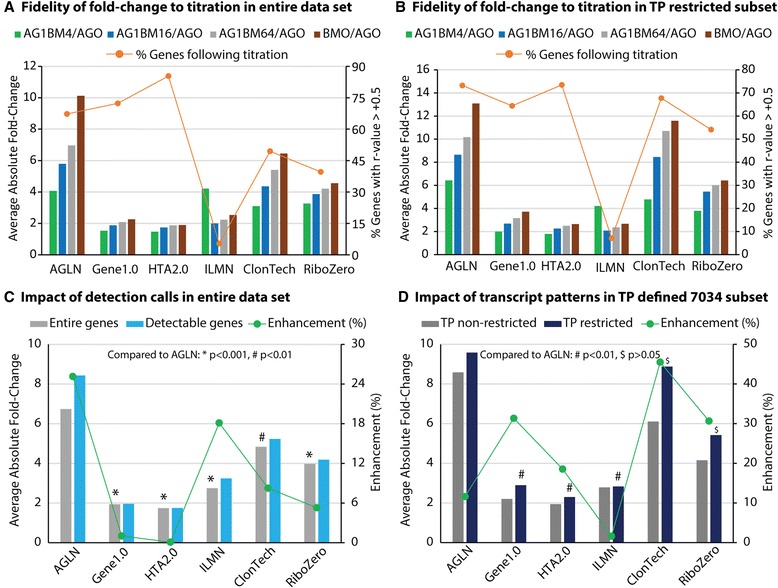 This study suggests that microarrays can perform on nearly equal footing with RNA-seq, in certain key features, specifically when the dynamic range is comparable. Furthermore, the concept of a transcript pattern has been introduced that may minimize potential confounding factors of multi-platform comparison and may be useful for similar evaluations.