Estonian scientists have announced the invention of a genetic testing technology to analyse the number of clinical biomarkers at the single-molecule level, which enhances the sensitivity of tests in precision medicine and will make them more affordable in future. The TAC-seq method, for which a patent is pending, is already being used in fertility clinics to determine the personal variations in the menstrual cycle for opportune embryo transfer.

The new molecular engineering method, called TAC-seq, raises the precision of biomarker analysis and is poised to make it more affordable. The method, for which a patent is pending, will be introduced in the healthcare system next year in the form of endometrial receptivity test, trademarked as the beREADY test.

Researchers from the Competence Centre on Health Technologies, in cooperation with the University of Tartu, University of Helsinki in Finland and the Karolinska Institutet in Sweden, published an article in Nature‘s partner journal Genomic Medicine in which the authors demonstrate targeted allele counting by sequencing (TAC-seq) along with several of its potential applications. The method measures, at an extremely high level of precision, the number of DNA and RNA molecules used as biomarkers in clinical samples and thereby describes the patient’s state of health.

A biomarker can be any molecule whose existence or absence is measurable and which gives information about the state of health. Clinics use thousands of biomarker-based tests, of which many analyse DNA as an agent of heredity and gene expression profiles. It is imperative that responses to clinical testing be as precise as possible and that the testing be priced at a reasonable level.

According to University of Tartu doctoral student in Bioinformatics Hindrek Teder, the new method is the key to extremely precise analysis that reflects the patient’s actual situation. “Ordinarily in clinical samples, the DNA has to be amplified using the PCR method to ensure material for next-generation sequencing, otherwise it isn’t measurable by instruments. It is not known how many copies are created of a given original molecule and thus the results are inaccurate. With TAC-seq, on the other hand, we see the raw data with no loss of information, and identify and remove all of the artificial copies made in the lab. The result is that the corrected biomarker values reflect the clinical sample with maximum reliability.”

The article describes three possible applications for the method. First of all, TAC-seq can be used for the endometrial receptivity testing—determining the levels of specific RNA molecules with the aim of ascertaining the best possible time to transfer the embryo into a woman undergoing infertility treatment and thereby increase the likelihood of success of IVF. Second, it can be used for non-invasive prenatal genetic testing (NIPT) to study the cell-free DNA in the woman’s blood to detect the most common chromosomal disorders in the foetus. Third, the method can be used for precise microRNA profiling in different body fluids. These molecules can be used as biomarkers for several conditions and thus forgo the need to perform an unpleasant and painful biopsy.

“In the process of laboratory analysis of biomarkers, each unique molecule gets a so-called molecular barcode. Molecules with a similar code—the copies made in the lab by PCR amplification—are found and merged together. This makes it possible to minimize technical bias, which can occur when material is amplified in the lab. Molecular barcodes have thus far been used in research studies, but now it is becoming a standard in analysis of clinical samples,” says Teder, who is also the first author of the article produced together with University of Tartu doctoral student in Molecular and Cellular Biology Mariann Koel and master’s degree student in Informatics Priit Paluoja.

The study leader, the principal investigator from the Competence Centre on Health Technologies, Dr. Kaarel Krjutškov, noted that the TAC-seq method was at first like a dream realized after years of trials. “There are a great number of scientific and high-tech genetic analytical methods for studying patients but we saw that there was a pressing need for an ultra-precise and affordable solution. In essence, TAC-seq is a genetic technology invention that will broaden the possibilities for researchers. In practice, the endometrial receptivity (beREADY) test is already in clinical validation. The test analyses 57 key endometrial biomarkers that provide an indication about the optimum day for transfer of an embryo fertilized in vitro back to the female to await pregnancy.”

“As a development activity, the TAC-seq project proceeded along close to the ideal course. First we conducted thorough fundamental research, then we filed for an international patent. Now we have published our results, describing the various facets of the method’s applications and the most important thing—the method is already being integrated into the healthcare system,” said Krjutškov in summing up the lengthy development process.

Principle and technical parameters of TAC-seq 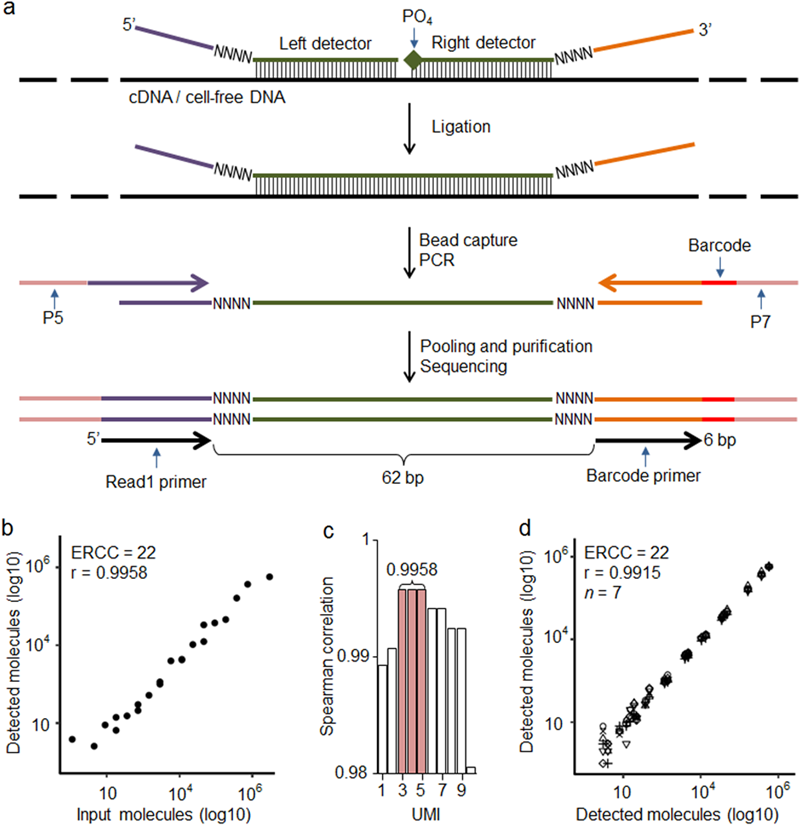 a Schematic diagram of the assay to detect specific mRNA or cell-free DNA. Target-specific DNA oligonucleotide detector probes hybridize under stringent conditions to the studied cDNA or cfDNA. Both detector oligonucleotides consist of a specific 27-bp region (green), 4-bp unique molecular identifier (UMI) motif (NNNN), and universal sequences (purple and orange). The right detector oligonucleotide is 5′ phosphorylated. After rigorous hybridization, the pair of detector probes is ligated using a thermostable ligase under stringent conditions. Next, the ligated detectors complexed with the target region are captured with magnetic beads and PCR amplified to introduce sample-specific barcodes and other common motifs that are required for single-read NGS. b Spearman correlation analysis of the input and detected ERCC synthetic spike-in mRNA molecules at UMI threshold 4 (UMI = 4). UMI threshold is defined as the number of detected unique UMI sequences. For example, UMI = 4 indicates that a certain UMI motif is detected at least four times. UMIs are valuable only if the number of UMI combinations (8-bp UMI provides 65,536 variants, for example) is substantially larger than the sum of the target molecules in the studied sample. c Bar plot of Spearman’s correlation analysis of the ERCC input and detected molecules at different UMI thresholds. dReproducibility of seven technical ERCC replicates (seven different icons on plot) of 22 spike-in molecules at UMI = 4