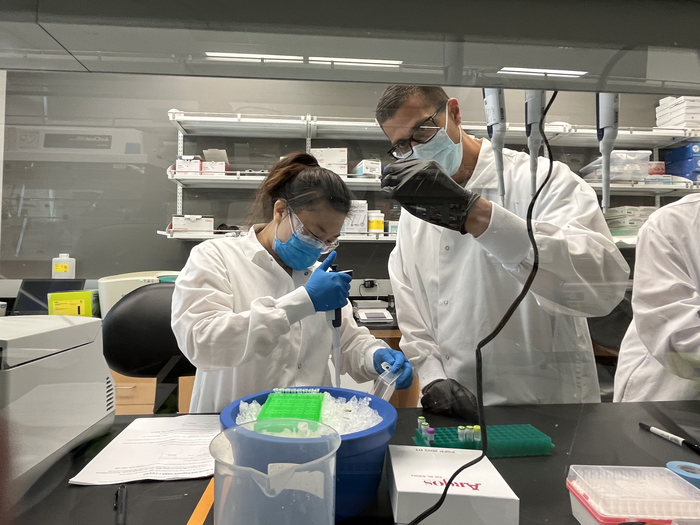 As a pediatric cardiologist, Tahmina Samad really wanted to help her patients, but sometimes she felt stymied. Trying to treat children with heart problems, but having no idea which patients would develop heart failure and which would not, was frustrating and heartbreaking.

When she heard about a program at the Chan Zuckerberg Biohub for people like her – doctors who wanted to learn to become research scientists – she knew she wanted to apply.

“During my pediatrics residency, then moving onto pediatric cardiology training, I really missed the scientific rigor of why we do things clinically. In clinical medicine, there are algorithms that help you make decisions for patients,” says Samad, a research fellow at Stanford University Medical Center. “In science there’s a lot more creativity – you have more space to do trial and error to solve problems. You don’t do that with a patient.”

Samad is one of six physicians in the 2022 cohort of CZ Biohub’s Physician–Scientist Fellowship Program (PSFP). The program aims to close the widening gap between the clinical and research sides of medicine by training medical doctors to do scientific research. Because physicians have in-depth clinical knowledge and are well positioned to ask critical research questions, establishing a program to help launch the next generation of physician–scientists was seen as an essential way to advance the Biohub’s mission of enabling discoveries to enhance human health.

“We all collectively recognize the ever-increasing power of science. We feel like it’s never been more important to equip people with the skills to ask and answer questions,” says David Cornfield, PSFP co-director and a professor of pediatric pulmonary medicine at Stanford’s School of Medicine. “And it’s never been easier to ask and answer questions, because the tools are ever more powerful.”

“Physician–scientists bring something special to the table,” says PSFP co-director Arun Padmanabhan, an assistant professor of medicine at UC San Francisco (UCSF). “They see patients, and they see not only the unmet clinical need, but the unmet understanding of clinical disease. And we think that that perspective is incredibly important and valuable. We want to encourage M.D.-trained physicians to pursue research careers.”

Physicians have long played a role in advancing medical science. (Jonas Salk, who developed the first polio vaccine, may be one of the most famous.) Later, the most common way of becoming a physician–scientist was through a joint M.D.–Ph.D. program. But in recent decades experts have been sounding the alarm on the decline of the physician–scientist workforce. A 2014 report by the National Institutes of Health found that the demographics of physician–scientists had shifted, with aging investigators far outnumbering younger ones.

The reasons for the decline are varied. John Huizar, a UCSF fellow in rheumatology in the 2022 PSFP cohort, says society benefits by giving doctors more chances to pursue research.

“I think physicians can be very bold scientists. What I’ve seen over the years is that physicians are often willing to go out on limbs, maybe because of something they remember from the obscurity of their first few years of medical school,” he says. “But there are people who didn’t get to do an M.D.–Ph.D. program who might like another bite at the apple. The whole enterprise is served by having multiple on-ramps. It’s nontrivial to get the financial support that you need to acquire the scientific training to run a basic research lab. This program is like an amazing incubator.”

For two years (with an option to continue for a third year), PSFP participants pursue a personal research project with a faculty mentor from either the Biohub or one of the Biohub’s three partner institutions (Stanford University, UCSF, or UC Berkeley). They also get training from the program’s instructors, Biohub researchers, and invited speakers on topics such as gene editing, bioinformatics, and grant writing. (Applications are now open for the 2023 cohort.)

Although the program is in its third year, this is the first year that participants have been able to come to the Biohub in person and learn lab techniques due to pandemic restrictions during the previous two years. This year’s focus in the lab was bulk RNA sequencing. Fellows worked with Biohub’s genomics experts to prepare their sample libraries and with Biohub’s data science experts to analyze their sequencing reads.

Huizar is researching connections between the gut microbiome and human immune response, with an eye towards whether such a connection could be harnessed therapeutically for autoimmune diseases such as lupus. Samad will investigate how metabolism plays a role in heart function, using induced pluripotent stem cells from pediatric patients who have developed heart failure.

Building community and a network of peer support

A more intangible but equally essential benefit that the Physician-Scientist Fellowship Program provides is a built-in network of people, all from different fields of medicine but in pursuit of similar goals.

“When people look at the holes in the pipeline for young folks going into research – why people are falling off the research track – there are protean reasons, one of which is extremely underappreciated: the absence of community, and the absence of a cohort that is all testifying to what’s possible,” Cornfield says. “In our three short years of doing this, one of the things that we’ve heard over and over again is that the curriculum, the program, the educational experience, and the money are great. But having a cohort of people who are similarly challenged and are going through similar career-stage challenges has been just as important, perhaps even more important.”

Anya Levinson, a UCSF assistant professor of pediatric oncology now in her third year with the PSFP program, echoes this sentiment. “One of the things about this program that has been really helpful for me is the idea of developing a community of M.D.s who want to embark on a research career – people who are all siloed in different parts of medicine and who otherwise wouldn’t intersect,” she says. “There are a lot of barriers and challenges to successfully pursuing a research career.”

Although the Biohub program is small, Padmanabhan and Cornfield hope it will have an amplifying effect.

“Our hope is that the Biohub’s Physician–Scientist program can serve as a light upon the hill, so to speak, to show what’s possible,” Cornfield says. “And then other research-intensive organizations or foundations can use what we have begun here to create similar programs that can further increase the supply of physician–scientists around the country.”