in Commentary, Publications 27 days ago 398 Views

Do we simply ingest a diagnostic probiotic based on programmed ribonucleic acids to analyze the intestinal health from individual cells in the future? Researchers at the Helmholtz Institute for RNA-based Infection Research (HIRI) and the Julius-Maximilians-Universität (JMU) in Würzburg have developed a new technology they call TIGER. It allows complex processes in individual cells to be deciphered in vivo by recording past RNA transcripts. The findings were published in the journal Nature Biotechnology on 5 January 2023.

Bacterial and viral infections can cause severe acute symptoms, but they can also have devastating long-term consequences such as triggering cancer. Consequently, scientists are looking for new approaches and technologies to better understand the course of diseases and predict the development of cells and tissues. They use increasingly precise methods to analyze the underlying processes in individual cells. One goal is to detect changes in gene activity, which in turn may indicate a pathological event.

“The identity and behavior of a cell not only depends on its current intracellular make-up and extracellular environment but also on its past states. We were looking for an efficient procedure at the single-cell level to peer into the past and connect it to the present,” Prof Chase Beisel explains. The head of the RNA Synthetic Biology Department at the Helmholtz Institute for RNA-based Infection Research (HIRI) in Würzburg is the lead author of the study, which has just been published in the journal Nature Biotechnology.

The institute is a site of the Braunschweig Helmholtz Centre for Infection Research (HZI) in cooperation with the Julius-Maximilians-Universität (JMU) of Würzburg, where Beisel also holds a professorship.

Peering into the cellular past

In their publication, the authors present a new technological approach that could significantly advance medical diagnostics in the future. Called TIGER, their method is a way to record the presence of specific RNAs in individual living cells.

According to Jiao, there are striking advantages to the method: “Previous research has only been able to approximate past cell states using huge amounts of data and computational prediction tools to measure asynchronous cells over time.”

The scientists involved in the study were able to record the transfer of antibiotic resistance between Escherichia coli cells as well as the invasion of host cells by Salmonella.

In the future, TIGER could be used to look into the transcription history of individual cells in a living organism and link it to the current status quo in order to decipher complex cellular reactions—in vivo and non-invasively. For example, one could imagine ingesting a TIGER probiotic to have the state of the digestive tract recorded and analyzed later on, the authors conclude.

TIGER (an acronym of “Transcribed RNAs Inferred by Genetically Encoded Records”) uses reprogrammed tracrRNAs (Rptrs) to record selected cellular transcripts as stored DNA edits in individual living bacterial cells. Rptrs are designed to base pair with recognized transcripts and convert them into guide RNAs. The guide RNAs then instruct a Cas9 base editor to target an introduced DNA target. The extent of base editing can then be read by sequencing. The technology takes advantage of findings that led to the development of LEOPARD, an in vitro diagnostic platform, in a previous study (Jiao C, Sharma S, Dugar G et al, Non-canonical crRNAs derived from host transcripts enable multiplexable RNA detection by Cas9, Science 2021). 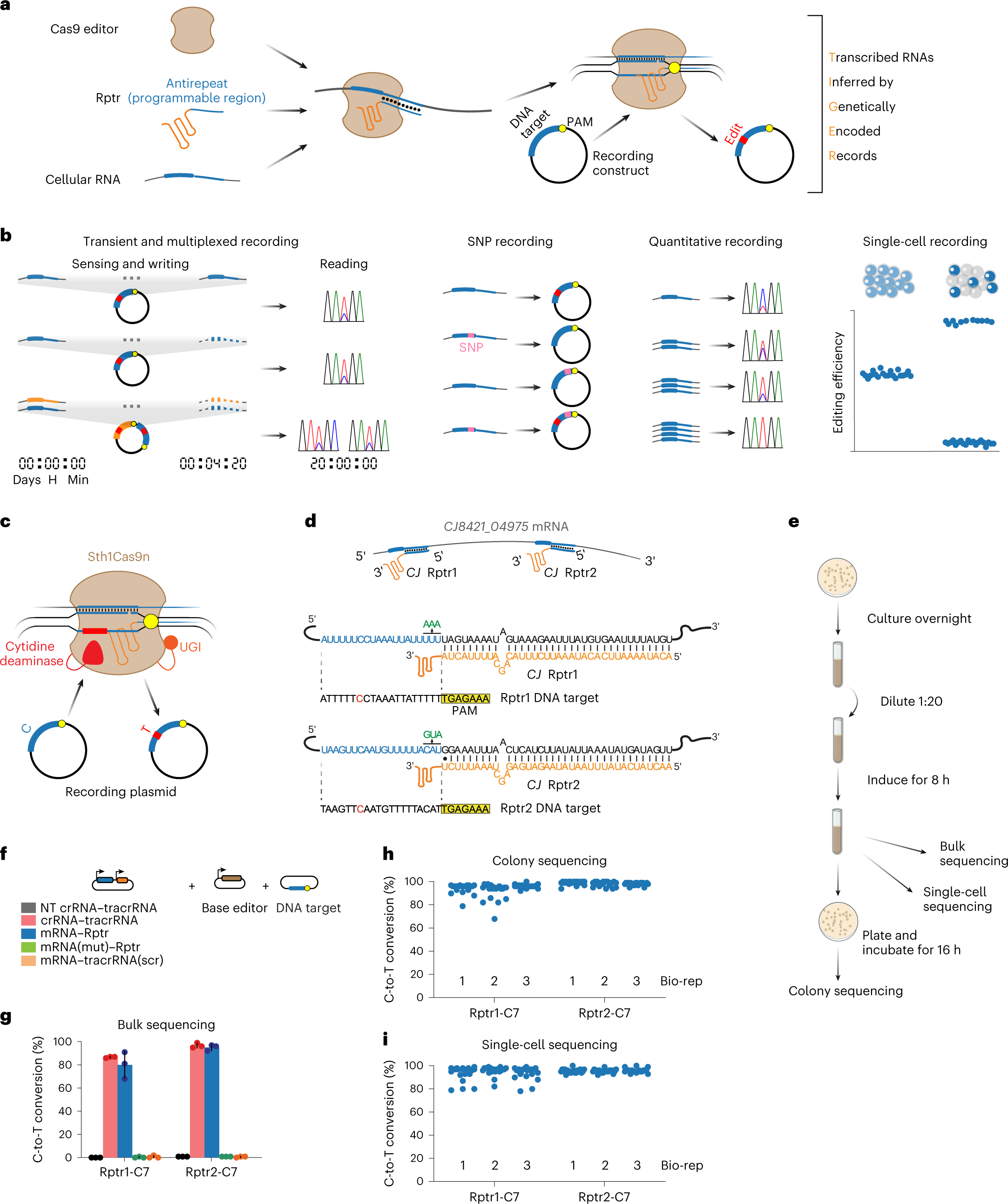 a, Overview of TIGER. A designed Rptr pairs within the selected transcript to form a gRNA that can be used by the Cas editor. The editor is then directed to a matching DNA sequence, creating a permanent edit only in the presence of the transcript. Within the transcript, the thin blue line is the region that pairs with the Rptr, whereas the thick blue line is the resulting guide sequence that specifies the DNA target. The PAM is depicted in yellow. b, Recording capabilities offered by TIGER. The single-cell recording captures phenomena observable only at the level of individual cells. c, Using the Sth1Cas9n cytosine base editor for RNA recording. Recording is assessed via the conversion of a C in the editing window (marked as red) to a T based on relative peak heights in Sanger sequencing chromatographs. UGI, uracil-DNA glycosylase inhibitor. d, Designed Rptr–DNA target pairs for sensing the CJ8421_04975 mRNA. Green nucleotides designate mutations made to disrupt DNA targeting. e, Experimental process to record the CJ8421_04975 mRNA constitutively expressed in E. coli. The recording can be read out through bulk sequencing, colony sequencing and single-cell sequencing. f, Constructs for assessing RNA recording. mRNA(mut), three nucleotides mutated at the 3′ end of the resulting gRNA guide. tracrRNA(scr), tracrRNA with the antirepeat domain scrambled. g, Results from bulk sequencing. Colors correspond to those in f. h, Results from colony sequencing. i, Results from single-cell sequencing. See the representative plots and gates associated with single-cell DNA sequencing in Extended Data Fig. 2a. C7 in g–i designates the C in the target assessed for C-to-T conversion. Values in g–i represent the mean and standard deviation of independent experiments starting from three separate colonies. Each dot for colony sequencing or single-cell DNA sequencing represents one of 20 sequenced colonies or single cells in the biological replicate. Bio-reps, biological replicates starting from separate colonies.