The Genome Analysis Toolkit (GATK) is a popular set of programs for discovering and genotyping variants from next-generation sequencing data. The current GATK recommendation for RNA sequencing (RNA-seq) is to perform variant calling from individual samples, with the drawback that only variable positions are reported. Versions 3.0 and above of GATK offer the possibility of calling DNA variants on cohorts of samples using the HaplotypeCaller algorithm in Genomic Variant Call Format (GVCF) mode. Using this approach, variants are called individually on each sample, generating one GVCF file per sample that lists genotype likelihoods and their genome annotations. In a second step, variants are called from the GVCF files through a joint genotyping analysis. This strategy is more flexible and reduces computational challenges in comparison to the traditional joint discovery workflow. Using a GVCF workflow for mining SNP in RNA-seq data provides substantial advantages, including reporting homozygous genotypes for the reference allele as well as missing data. Taking advantage of RNA-seq data derived from primary macrophages isolated from 50 cows, researchers from Agriculture and Agri-Food Canada validated the GATK joint genotyping method for calling variants on RNA-seq data by comparing this approach to a so-called “per-sample” method. In addition, pair-wise comparisons of the two methods were performed to evaluate their respective sensitivity, precision and accuracy using DNA genotypes from a companion study including the same 50 cows genotyped using either genotyping-by-sequencing or with the Bovine SNP50 Beadchip (imputed to the Bovine high density). Results indicate that both approaches are very close in their capacity of detecting reference variants and that the joint genotyping method is more sensitive than the per-sample method. Given that the joint genotyping method is more flexible and technically easier, the researchers recommend this approach for variant calling in RNA-seq experiments. 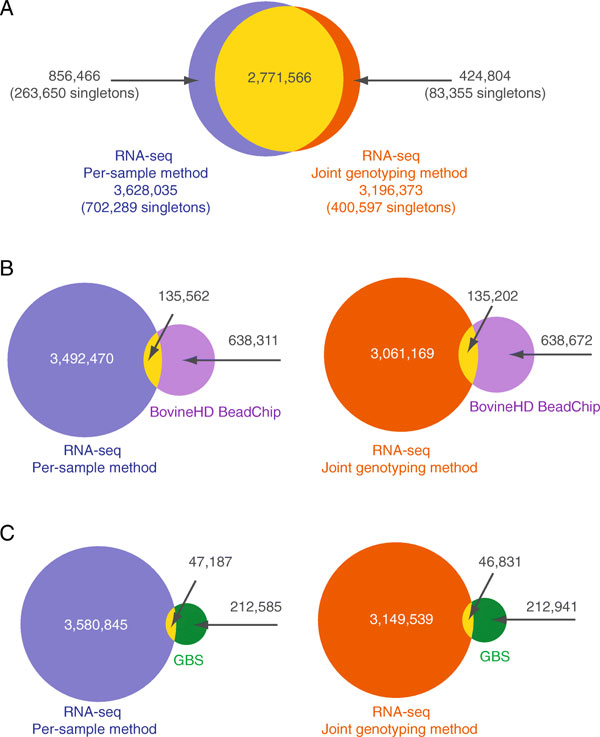