The impact of amplification on differential expression analyses by RNA-Seq

Currently quantitative RNA-Seq methods are pushed to work with increasingly small starting amounts of RNA that require PCR amplification to generate libraries. However, it is unclear how much noise or bias amplification introduces and how this effects precision and accuracy of RNA quantification. To assess the effects of amplification, reads that originated from the same RNA molecule (PCR-duplicates) need to be identified. Computationally, read duplicates are defined via their mapping position, which does not distinguish PCR- from natural duplicates that are bound to occur for highly transcribed RNAs. Hence, it is unclear how to treat duplicate reads and how important it is to reduce PCR amplification experimentally.

Here, researchers from Ludwig Maximilians University have generated and analysed RNA-Seq datasets that were prepared with three different protocols (Smart-Seq, TruSeq and UMI-seq). They found that a large fraction of computationally identified read duplicates can be explained by sampling and fragmentation bias. Consequently, the computational removal of duplicates does not improve accuracy, power or false discovery rates, but can actually worsen them. Even when duplicates are experimentally identified by unique molecular identifiers (UMIs), power and false discovery rate are only mildly improved. However, the researchers did find that power does improve with fewer PCR amplification cycles across datasets and that early barcoding of samples and hence PCR amplification in one reaction can restore this loss of power. 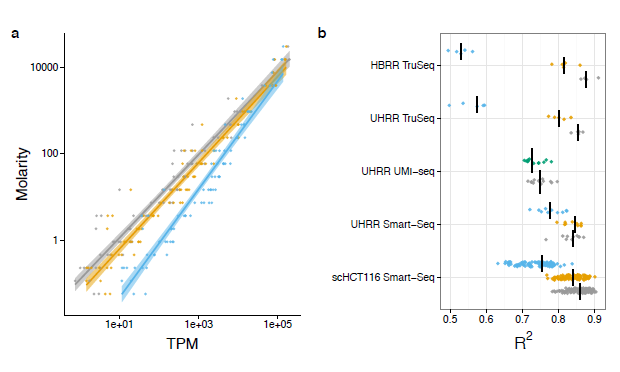 Removing duplicates does not improve the accuracy of expression quantification as measured using the ERCC spike-ins. Expression levels as quantified in transcripts per million reads (TPM) are a good predictor of the concentrations of the ERCC spike-ins. The log-linear fit of TPM vs. Molarity for one exemplary sample of the UHRR-TruSeq dataset is shown in a). The most accurate prediction of ERCC molarity is the TPM estimator using all reads (grey). Removing duplicates as PE (yellow) makes the fit a little worse and removing SE-duplicates (yellow) much worse. The adjusted R2 for all samples are summarized in b), the median for each dataset is marked as black line. The R2 of the TPM estimate from the removal of PCR-duplicates using UMIs (green) is surprisingly similar to keeping PCR-duplicates (grey).

Computational removal of read duplicates is not recommended for differential expression analysis. However, the pooling of samples as made possible by the early barcoding of the UMI-protocol leads to an appreciable increase in the power to detect differentially expressed genes.