The MicroRNA Expression Signature of Bladder Cancer by Deep Sequencing

Researchers at Kagoshima University, Japan determined the genome-wide miRNA expression signature in bladder cancer (BC) by deep sequencing technology. A total of ten small RNA libraries were sequenced (five BCs and five samples of histologically normal bladder epithelia (NBE)), and 13,190,619 to 18,559,060 clean small RNA reads were obtained. A total of 933 known miRNAs and 17 new miRNA candidates were detected in this analysis.

Among these miRNAs, the researchers focused on the miR-195/497 cluster because this clustered miRNA had not been analyzed in BC. Transfection of mature miR-195 or miR-497 in two BC cell lines (BOY and T24) significantly inhibited cancer cell proliferation, migration and invasion, suggesting that the miR-195/497 cluster functioned as tumor suppressors in BC. Regarding the genes targeted by the miR-195/497 cluster, the TargetScan algorithm showed that 6,730 genes were putative miR-195/497 targets, and 113 significantly enriched signaling pathways were identified in this analysis. The “Pathways in cancer” category was the most enriched, involving 104 candidate target genes. Gene expression data revealed that 27 of 104 candidate target genes were actually upregulated in BC clinical specimens. Luciferase reporter assays and Western blotting demonstrated that BIRC5 and WNT7A were directly targeted by miR-195/497. In conclusion, aberrant expression of clustered miRNAs was identified by deep sequencing, and downregulation of miR-195/497 contributed to BC progression and metastasis. Tumor suppressive miRNA-mediated cancer pathways provide new insights into the potential mechanisms of BC oncogenesis. 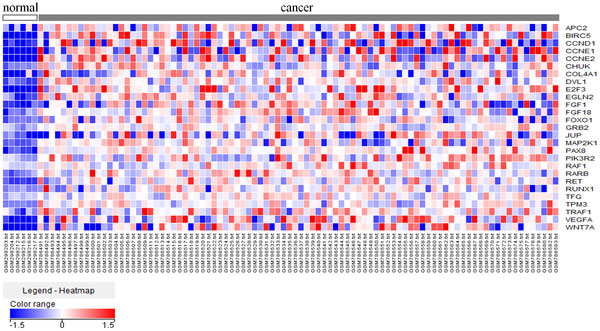