UCSC scientists point to introners as the source of the vast majority of introns, a source of molecular complexity unique to eukaryotes

One of the most long-standing, fundamental mysteries of biology surrounds the poorly understood origins of introns. Introns are segments of noncoding DNA that must be removed from the genetic code before it is translated in the process of making proteins. Introns are an ancient feature found across all eukaryotic life, a wide range of organisms that spans all animals, plants, fungi, and protists, but are absent in prokaryotic genomes such as those of bacteria. There is a massive variation in the number of introns found in different species’ genomes, even between closely related species.

Now, a new study led by scientists at UC Santa Cruz and published in the journal Proceedings of the National Academy of Sciences (PNAS) points to introners, one of several proposed mechanisms for the creation of introns discovered in 2009, as an explanation for the origins of most introns across species. The researchers believe that introners are the only likely explanation for intron burst events, in which thousands of introns show up in a genome seemingly all at once, and they find evidence of this in species across the tree of life.

“[This study] provides a plausible explanation for the vast majority of origins of introns,” said Russell Corbett-Detig, associate professor of biomolecular engineering and senior author on the study. “There’s other mechanisms out there, but this is the only one that I know of that could generate thousands and thousands of introns all at once in the genome. If true, this suggests that we’ve uncovered a core process driving something that’s really special about eukaryotic genomes – we have these introns, we have genomic complexity.”

Introns are important because they allow for alternative splicing, which in turn allows one gene to code for multiple transcripts and therefore serve multiple complex cellular functions. Introns can also affect gene expression, the rate at which genes get turned on to make proteins and other non-coding RNA. Introns ultimately have a neutral to slightly negative effect on the species they exist in because when the splicing of introns is not carried out correctly, the gene they live in can be harmed and even die. Such missed splicing instances are the cause of some cancers.

Corbett-Detig and his colleagues searched the genomes of 3,325 eukaryotic species – all of the species for which we have access to high-quality reference genomes – to find out how common introner-derived introns are, and in which groups of species they are seen most frequently. They found a total of 27,563 introner-derived introns in the genomes of 175 species, meaning evidence of introners could be seen in 5.2% of surveyed species. 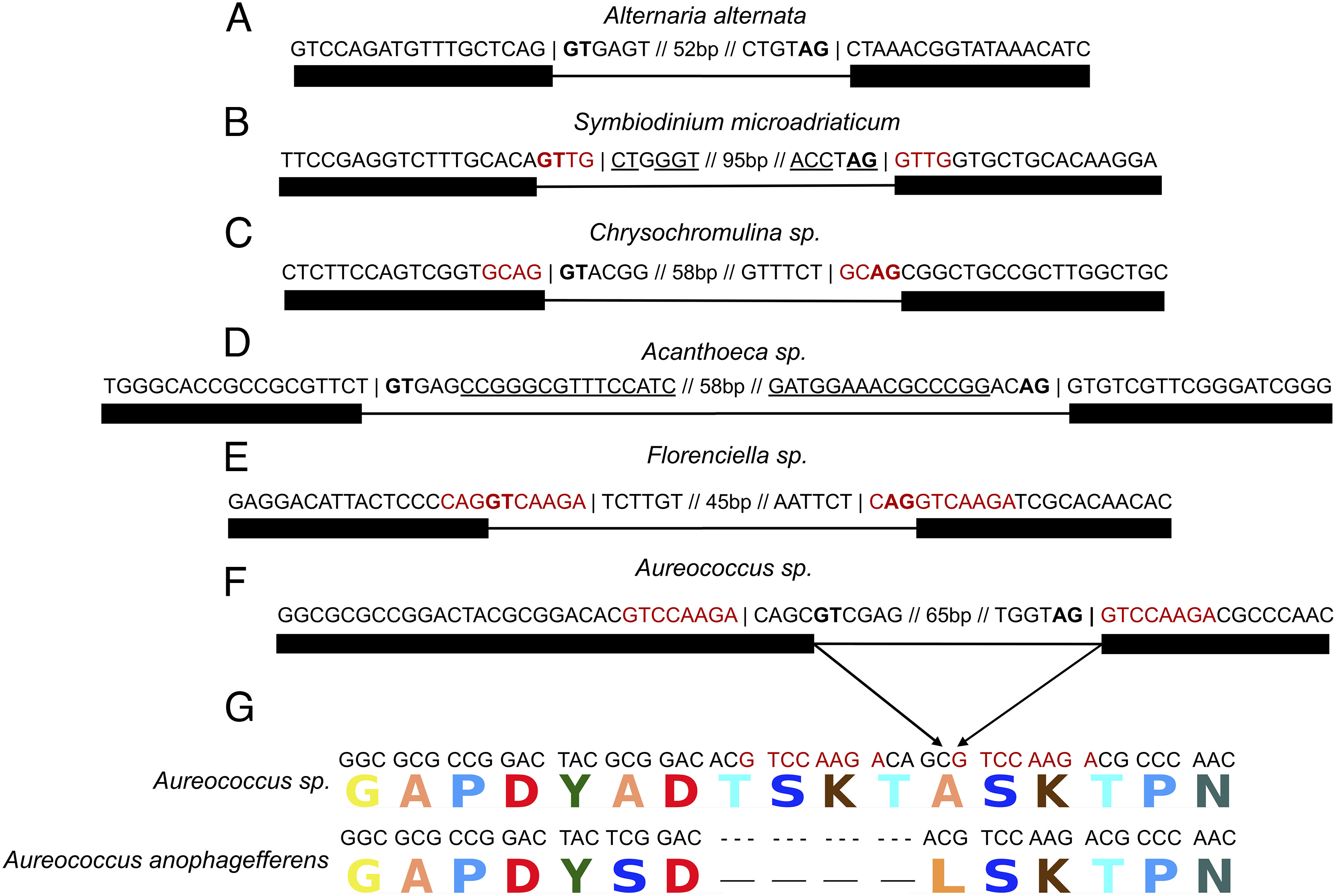 Splice sites are shown in bold, Introner boundaries are denoted by a vertical bar, and introns and exons are represented by lines and boxes, respectively. (A) Introners in Alternaria alternata do not exhibit specific sequence features associated with known DNA transposition mechanisms and appear to replicate via direct insertion. (B) Introners in Symbiodinium microadriaticum show clear evidence of 4 bp TSDs (shown in green) and TIRs (underlined), consistent with many known DNA transposons, carry their 3′ splice site, and co-opt their 5′ splice site from their TSDs upon insertion. (C) Introners in Chrysochromulina sp. show evidence of 4 bp TSDs but no evidence of TIRs, carry their 5′ splice site, and co-opt their 3′ splice site. (D) Introners in Acanthoeca sp. show clear evidence of TIRs but no TSDs. (E) Introners in Florenciella sp. do not carry either splice site and instead co-opt both from their insertion site. (F) Introners in Aureococcus sp. carry both splice sites but add an extra 12 bp into the transcript upon insertion (4 bp from the Introner + 8 bp from the TSD), (G) resulting in the addition of four amino acids to the respective protein when compared to an ortholog from a different isolate which lacks an Introner at that position.

This evidence was found in species of all types, from animals to single-cell protists – organisms whose last common ancestor lived over 1.7 billion years ago. The diversity of species in which they are found suggests introners are both the fundamental and most widespread source of introns across the tree of life.

“It’s diverse – it isn’t like there’s one little chunk of the tree of life that has this going on,” Corbett-Detig said. “You see this in a pretty big range of species, which suggests it’s a pretty general mechanism.”

This analysis can only detect evidence of introners going back some millions of years, a relatively short time span when it comes to evolutionary history. It’s likely that intron bursts could have occurred in some species, such as humans, at a time beyond the scope of this analysis – meaning this study probably vastly underestimates the true scope of introner-dervied introns across all eukaryotes.

In the ecosystem of the genome, introners can be thought of as a parasite with the goal to survive and replicate itself. When an introner enters a new organism, that new host has never seen that element before and has no way to defend itself, allowing it to proliferate in a new species.

“Everything in evolution is a conflict and these elements, [including introners], are selfish pieces of DNA,” said Landen Gozashti, the paper’s first author who developed the study’s analysis methods as an undergraduate at UCSC and is now a graduate student at Harvard University. “They only want to replicate, and the only reason they don’t want to kill their host is because that kills them.”

In being spliced out of the DNA sequence before translation of the gene into proteins occurs, the introners found a way to have less impact on the fitness of the host gene, allowing them to persist through the generations of the host species’ evolution. The researchers found that introners-derived introns seem to splice better than other types of introns, to limit their negative effects on the gene so that both the introner and the host can better survive.

More introners in the sea

While all introners were found across all types of species, results showed that marine organisms were 6.5 times more likely to have introners than land species.

The researchers think this is likely due to a phenomena called horizontal gene transfer, in which genes transfer from one species to a different one, as opposed to the typical vertical transfer via mating and the passing of genes from parent to child. Horizontal gene transfer has already been known to occur more commonly in marine environments, especially between single-cell species with complex ecologies.

Introners can travel this way because they belong to a class of genomic elements called transposable elements, which have the ability to move beyond the cell environment in which they live, making them mechanistically well-equipped to travel between species via horizontal gene transfer. As introners transferred from one species to another in marine environments, they vastly expanded their presence across the tree of life.

Considering we know that all species evolved from marine organisms, it could have been that land species gained introns from intron bursts far back in their evolutionary history.

“If your ancestors were marine organisms, which they all were, there’s a good chance that a lot of your introns are sort of inherited from a similar [introner burst] event back then,” Corbett-Detig said. “This might have been very important in our evolutionary past.”

More introners were also found across fungal species, which are also known to have higher rates of horizontal gene transfer, further supporting the idea that this phenomena drives itroner gain.

In future research, Corbett-Detig plans to look for proof of horizontal gene transfer in the form of nearly identical introners in two different species. He has set up data mining pipelines so that as the global community of genomics researchers contribute new species’ genomes to data repositories, his algorithm will search each new genome’s introners and compare it to all of the known introners to look for similarities.

This study presents a challenge to one of the overarching theories of genome evolution as to what drives genomic complexity in eukaryotes. The theory also posits that at a point in evolution, many species had low effective population sizes, meaning very few organisms in a species were producing offspring to create their next generation. This allowed elements known to have slightly negative effects on the population to accumulate in the genome.

Following this theory, itroners, which are neutral to slightly deleterious, would be seen more commonly in populations with lower effective populations – but the researchers found the opposite. For example, they found that Symbiodinium, a protist known to have a much higher effective population size than humans, land plants, and other invertebrates, is the species that seems to be gaining the most introns of those surveyed.

But this research points toward complexity arising not from an adaptation created by the genome itself but as a response to conflict caused by the invading transposable element, the introner, as it tries to proliferate. As introners and other elements struggle to survive and persist, this conflict drives genome complexity.

The neutral to negative effects of introns are also evidenced by their effect on gene expression. When comparing genes with introners inserted into them to genes without, those that do have introners had a lower overall expression level, meaning they are turned on less often to perform functions in the body.

The researchers believe that introners are not necessarily directly causing this lower expression, but that genes that are expressed less have a higher tolerance for an element that may be affecting them negatively because they matter less for the species survival. Meanwhile, genes that are highly expressed and may be coding for key functions in the body likely can’t tolerate the introduction of new introns that could cause them to perform their task less effectively.

Corbett-Detig’s ongoing research on this topic also involves looking at direct evidence of how the appearance of introns in a genome affects individuals within a species. He has identified several species that are experiencing ongoing intron bursts and is looking at the effect of introners on the DNA and RNA of the cell, and how this affects the species’ evolutionary fitness.