Posted by: RNA-Seq Blog in Publications 9 days ago 625 Views

Molecular single cell analyses provide insights into physiological and pathological processes. Here, in a stepwise approach, a team led by researchers at the Fraunhofer-Institute for Toxicology and Experimental Medicine first evaluate 19 protocols for single cell small RNA sequencing on MCF7 cells spiked with 1 pg of 1,006 miRNAs. Second, the researchers analyze MCF7 single cell equivalents of the eight best protocols. Third, they sequence single cells from eight different cell lines and 67 circulating tumor cells (CTCs) from seven SCLC patients. Altogether, the researchers analyzed 244 different samples. They observed high reproducibility within protocols and reads covered a broad spectrum of RNAs. For the 67 CTCs, they detected a median of 68 miRNAs, with 10 miRNAs being expressed in 90% of tested cells. Enrichment analysis suggested the lung as the most likely organ of origin and enrichment of cancer-related categories. Even the identification of non-annotated candidate miRNAs was feasible, underlining the potential of single cell small RNA sequencing. 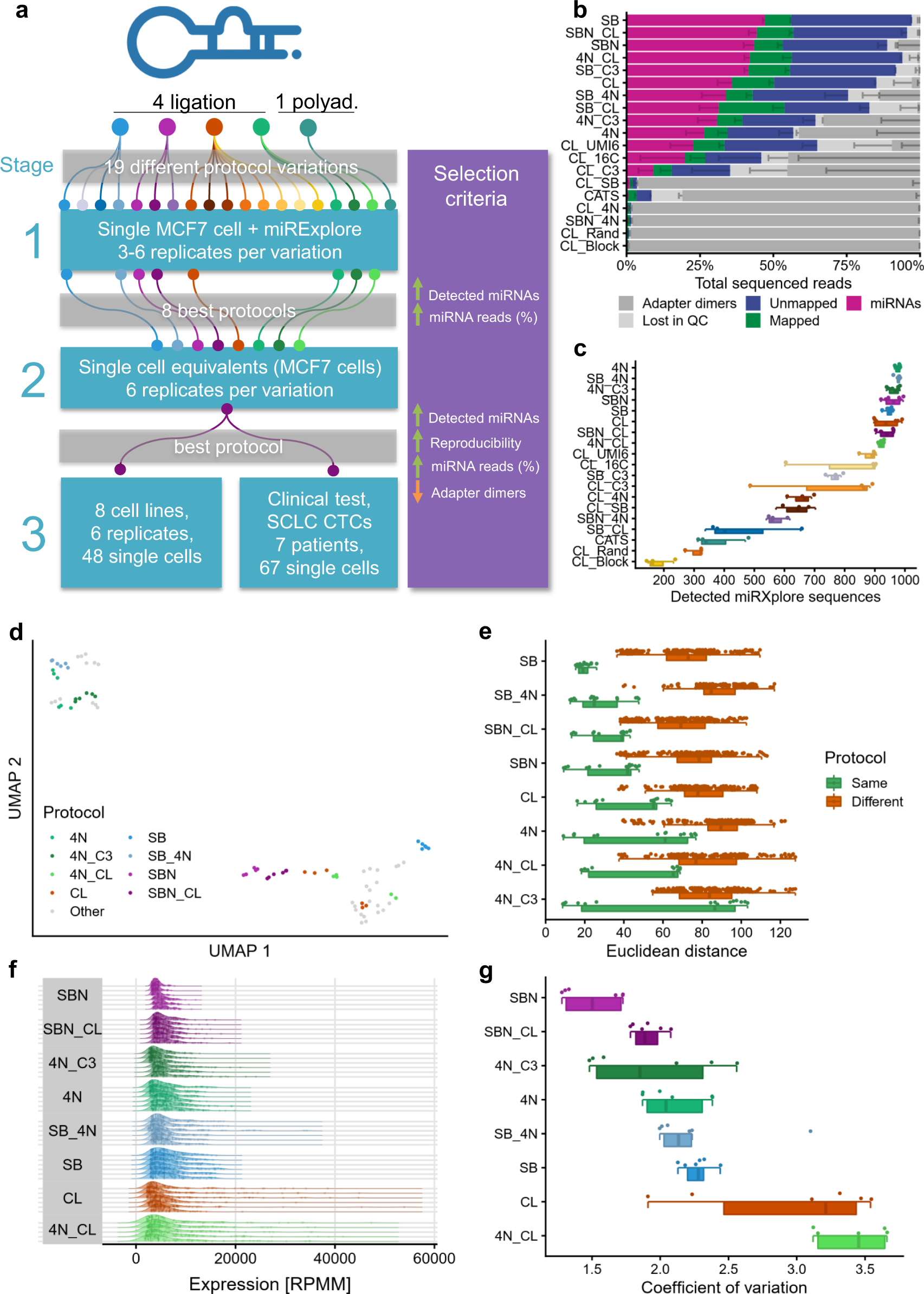 a Overview of the experimental setup consisting of three stages. SCLC CTCs = small cell lung cancer circulating tumor cells. b Read distribution for all tested protocols, sorted by miRNA reads proportion. The data are presented as mean values ±  the standard deviation (n = 6 biologically independent samples for the top eight protocols, n = 3 for the others), which is shown as a smaller error bar in a darker color than its corresponding read group and only represented in one direction. c Detected miRXplore sequences for all tested protocols, sorted by decreasing average per protocol shown as boxplot (bottom) and dot plot (top). Each sample is shown as one dot and colored by protocol. The boxes span the first to the third quartile with the vertical line inside the box representing the median value. The whiskers show the minimum and maximum values or values up to 1.5 times the interquartile range below or above the first or third quartile if outliers are present. d UMAP embedding of all sequenced samples with miRXplore spike-in. The samples of the best eight protocols are highlighted in their respective color. The remaining protocols are grayed out. e Euclidean distance on the log2 transformed sequence expression showing the reproducibility between all replicates of the same protocol (green) and between all samples of one protocol variant compared to all other protocol variants (brown). Each dot represents the distance observed between two samples. Only nonredundant distances are shown (i.e., the distance of sample 1 to sample 2 is considered identical to the distance of sample 2 to sample 1). For each protocol, a dot plot (top), as well as a boxplot (bottom), is shown. The boxplot was defined in the same manner as for panel c. f Distribution of the top 100 highest expressed miRXplore sequences per sample, normalized as reads per million mapped (RPMM). The samples are grouped by protocol and ordered by ascending coefficient of variation. The vertical lines inside the areas delimit the quartiles. Every dot inside the area represents the expression level of one sequence. g Coefficient of variation for all samples grouped by the protocol in ascending order shown as dot plot (top) as well as boxplot (bottom). Each sample is represented by a dot. The boxplot was defined in the same manner as for panel c. Source data are provided in the Source Data file.