While bipolar disorder is one of the most-studied neurological disorders—the Greeks noticed symptoms of the disease as early as the first century—it’s possible that scientists have overlooked an important part of the brain for its source.

Scientists from the Florida campus of The Scripps Research Institute (TSRI) have shown for the first time that ensembles of genes within the striatum—a part of the brain that coordinates many primary aspects of our behavior, such as motor and action planning, motivation and reward perception—could be deeply involved in the disorder. Most modern studies of bipolar disorder have concentrated on the brain’s cortex, the largest part of the brain in humans, associated with higher-level thought and action.

“This is the first real study of gene expression in the striatum for bipolar disorder,” said Ron Davis, chair of the Department of Neuroscience at TSRI, who directed the study. “We now have a snapshot of the genes and proteins expressed in that region.”

The study, published recently online ahead of print in the journal Molecular Psychiatry, also points to several pathways as potential targets for treatment.

Bipolar disorder is a mental illness that affects about 2.6 percent of the U.S. adult population—some 5.7 million Americans—with a sizable majority of these cases classified as severe. The disease runs in families, and more than two-thirds of people with bipolar disorder have at least one close relative with the illness or with unipolar major depression, according to the National Institute of Mental Health.

In the new research, tissue samples from 35 bipolar and non-bipolar control subjects were analyzed. The number of genes differentially expressed in tissue samples from the two groups turned out to be surprisingly small—just 14 in all. However, co-expression network analysis also revealed two modules of interconnected genes that were particularly rich in genetic variations associated with bipolar disorder, suggestive of a causal role in the disorder. One of these two modules was particularly striking, as it seemed to be highly specific to the striatum. 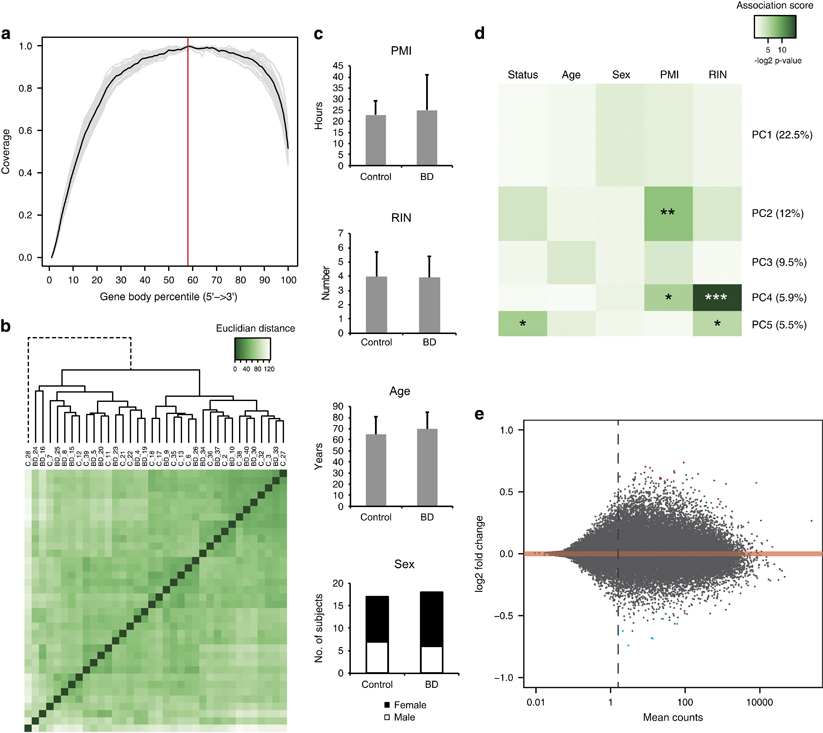 (a) Normalized distribution of RNA-Seq reads across gene bodies. Gray curves correspond to individual samples, the black curve shows the average distribution for all 36 samples. Red line indicates peak for the averaged distribution. (b) Correlation heatmap and dendrogram of all 36 samples based on the Euclidean distances computed using expression data for all genes. The outlier indicated by a dashed line was removed from analysis. (c) Mean age, PMI, RIN and sex proportions of remaining samples (35) in control (17) and BD (18) groups. Error bars indicate s.d. No statistically significant difference was found between the two groups for any covariates (pAge=0.37, pRIN=0.88, Student’s t-test; pPMI=0.58, Welch’s test; pSex=0.73, Fisher’s Exact test). (d) Heatmap of the five first principal components derived by PCA of all gene expression data and their association with biological and technical covariates. Correlation with age and RIN was calculated through Pearson’s coefficient; correlation with PMI was calculated through the Spearman’s coefficient; association with status and sex was evaluated through the Student’s t-test (see Materials and Methods). Asterisks indicate significance level (*P<0.05, **P<0.01, ***P<0.0001). The height of the row corresponding to each principal component is proportional to its contribution to variance. (e) Plot of average read counts on the x axis against log2 fold-change (BD relative to control) on the y axis for all 47 886 genes. Low/zero count genes are to the left of the dashed vertical line, genes to the right of this line were used in all analyses. DE genes at 5% FDR (Benjamini–Hochberg) are indicated by red (upregulated) and blue (downregulated) circles. BD, bipolar disorder; DE, differential expression; FDR, false discovery rate; PMI, postmortem interval; RIN, RNA integrity number.

“Our finding of a link between bipolar disorder and the striatum at the molecular level complements studies that implicate the same brain region in bipolar disorder at the anatomical level, including functional imaging studies that show altered activity in the striatum of bipolar subjects during tasks that involve balancing reward and risk,” said TSRI Research Associate Rodrigo Pacifico, who was first author of the new study. Analyzing reactions to risk was important because bipolar patients may act impulsively and engage in high-risk activities during periods of mania.

Pathway analysis also found changes in genes linked to the immune system, the body’s inflammatory response, and cells’ energy metabolism. Davis noted, “We don’t know if these changes are a cause of the disease or the result of it. But they provide additional gene markers in bipolar disorder that could potentially lead to the future development of diagnostics or treatments.”

About The Scripps Research Institute

The Scripps Research Institute (TSRI) is one of the world’s largest independent, not-for-profit organizations focusing on research in the biomedical sciences. TSRI is internationally recognized for its contributions to science and health, including its role in laying the foundation for new treatments for cancer, rheumatoid arthritis, hemophilia, and other diseases. An institution that evolved from the Scripps Metabolic Clinic founded by philanthropist Ellen Browning Scripps in 1924, the institute now employs more than 2,500 people on its campuses in La Jolla, CA, and Jupiter, FL, where its renowned scientists—including two Nobel laureates and 20 members of the National Academy of Science, Engineering or Medicine—work toward their next discoveries. The institute’s graduate program, which awards PhD degrees in biology and chemistry, ranks among the top ten of its kind in the nation. For more information, see www.scripps.edu.