Long intergenic non-coding RNAs (lncRNAs) represent an emerging and under-studied class of transcripts that play a significant role in human cancers. Due to the tissue- and cancer-specific expression patterns observed for many lncRNAs it is believed that they could serve as ideal diagnostic biomarkers. However, until each tumor type is examined more closely, many of these lncRNAs will remain elusive.

Here researchers from the Washington University School of Medicine characterized the lncRNA landscape in lung cancer using publicly available transcriptome sequencing data from a cohort of 567 adenocarcinoma and squamous cell carcinoma tumors. Through this compendium they identified over three thousand unannotated intergenic transcripts representing novel lncRNAs. Through comparison of both adenocarcinoma and squamous cell carcinomas with matched controls they discovered 111 differentially expressed lncRNAs, which they termed lung cancer associated lncRNAs (LCALs). A pan-cancer analysis of 324 additional tumor and adjacent normal pairs enabled the researchers to identify a subset of lncRNAs that display enriched expression specific to lung cancer as well as a subset that appear to be broadly deregulated across human cancers. Integration of exome sequencing data revealed that expression levels of many LCALs have significant associations with the mutational status of key oncogenes in lung cancer. Functional validation, using both knockdown and overexpression, showed that the most differentially expressed lncRNA, LCAL1, plays a role in cellular proliferation. 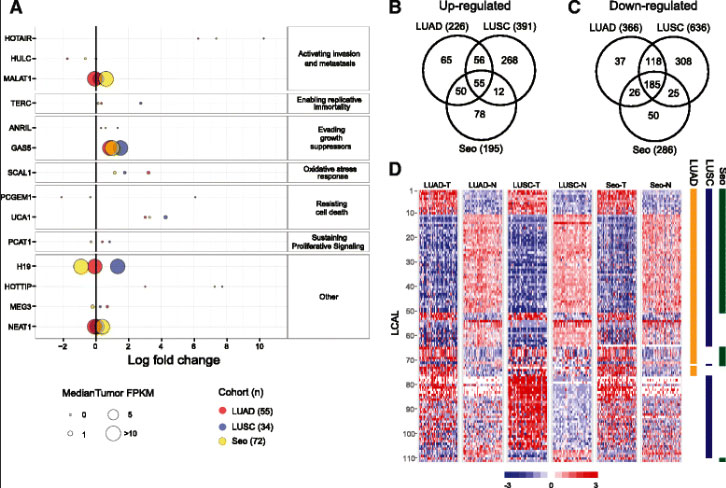