Periprosthetic joint infection (PJI) is a devastating complication of knee and hip replacement surgery that can, in some cases, be difficult to distinguish from other causes of arthroplasty failure. An “omics”-based tool that measures predicted abundance of immune cells may aid in making the diagnosis of failed arthroplasty due to PJI, suggests a study in The Journal of Bone & Joint Surgery.

While it is known that neutrophils are elevated at sites of infected arthroplasties, measuring neutrophil amounts has typically involved cell counting or microscopic visualization and is not possible in certain sample types. Transcriptomics is an emerging technique that uses RNA sequencing to determine which genes are expressed.

CIBERSORTx is an analysis tool for transcriptomic data that generates “predicted cellularity profiles” from RNA sequence data in samples with mixed cell populations. It provides a potential alternative to standard methods of evaluating cellular population composition from otherwise unsuitable sample types and may allow for standard methods to be foregone altogether.

Testing was performed on sonicate fluid samples, obtained using an ultrasound technique refined by Dr. Patel and her team that samples surfaces of surgically removed implants.

According to Dr. Patel, “Sonicate fluid provides a direct interrogation of implant surfaces and therefore provides an ideal sample type for investigation of key immune responses during arthroplasty failure.”

The researchers used CIBERSORTx to compare sonicate fluid samples from failed knee and hip arthroplasty components from 53 patients with PJI and 40 with non-infectious causes of arthroplasty failure. Predicted cellularity profiles were compared to determine whether the relative abundance of predicted specific cell types differed between infected and non-infected samples –thus potentially aiding in making the sometimes-difficult distinction between the two.

CIBERSORTx cellularity prediction from sonicate fluid, comparing subjects in the PJIF group and the NIAF group 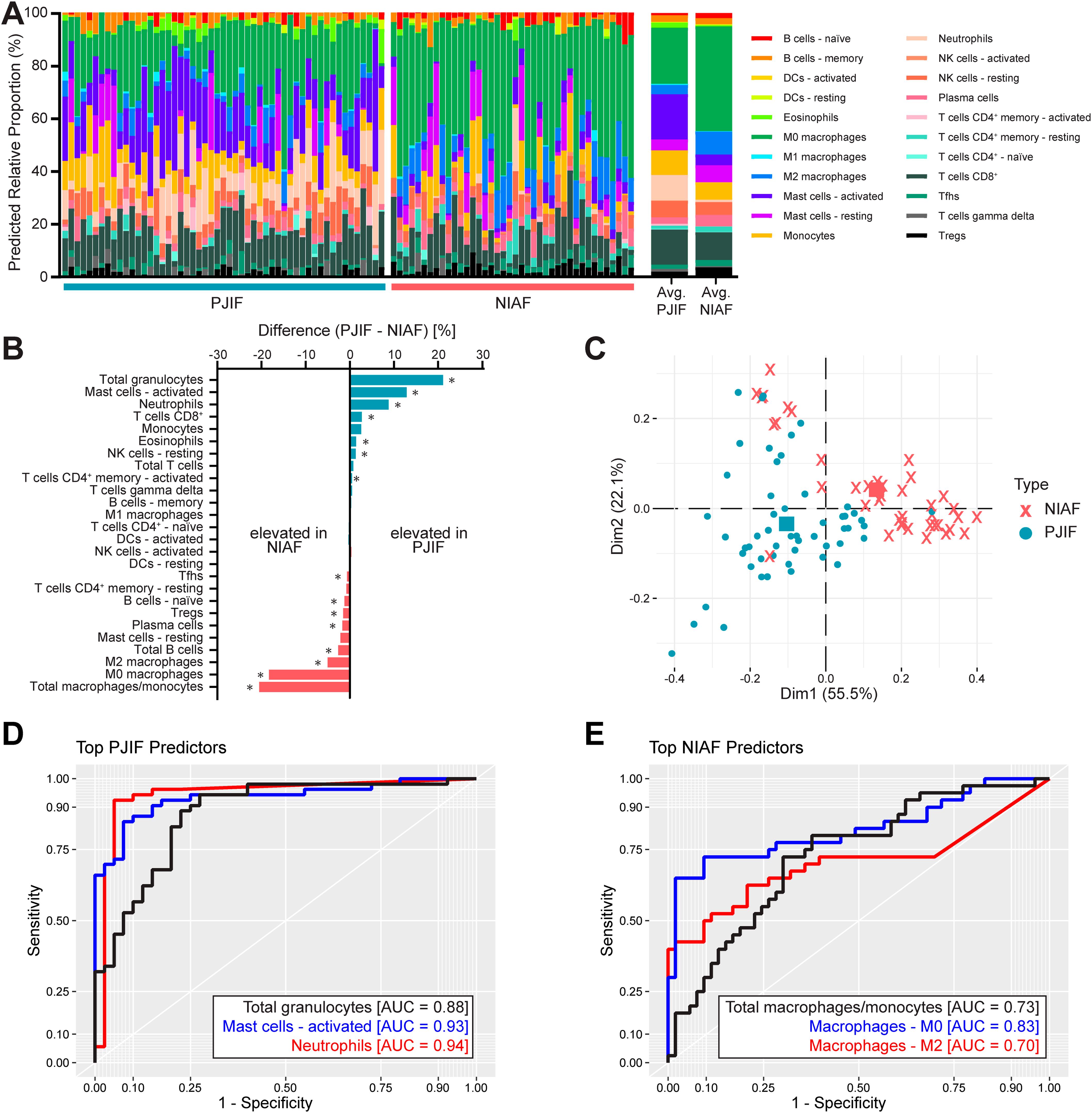 NK = natural killer, DC = dendritic cell, and Tfhs = T follicular helper cells. Fig. 1-A Overall analysis of predicted relative proportion (%) of each of the 22 cellular fractions, shown as individual samples (left) and averaged (right). Fig. 1-B Difference in the predicted cellular proportion between the samples from PJIF and NIAF cases. Asterisks (*) indicate fractions with p values of ≤0.05 when comparing PJIF cases with NIAF cases. Fig. 1-C PCA showing differential clustering of PJIF and NIAF cases based on dimensions Dim1 and Dim2. Square points of corresponding colors indicate the geometric means of the sample population. Figs. 1-D and 1-E ROC curves, including the AUCs, for predicted cellular fractions with the best ability to identify samples from PJIF cases (Fig. 1-D) and NIAF cases (Fig. 1-E). Significance was determined by the Welch 2-sample t test. The data depicted are from 40 NIAF cases and 53 PJIF cases.

Of the 22 predicted cellular fractions evaluated, 12 showed differences in relative abundance in PJI samples versus those with non-infectious arthroplasty failure. Not surprisingly, samples from patients with PJI had increased proportions of immune cell types that play “crucial roles in the immune response to bacterial infection,” according to the authors. Two predicted immune cell types – neutrophils and activated mast cells – were “highly able to differentiate PJI” from non-infectious arthroplasty failure.

In contrast, non-infectious failed arthroplasty cases were associated with predicted cells involved in “tissue homeostasis and repair in response to chronic inflammation.” For example, this would include inflammation caused by osteoarthritis, rheumatoid arthritis, or immune reactions to the prosthetic device itself. In particular, predicted macrophages/monocytes, primarily those of M0- and M1-like phenotypes, were associated with non-infectious arthroplasty failure.

In PJI cases, some types of immune cells were differentially abundant in Staphylococcus aureus versus S. epidermidis infections – the two most common bacterial causes of PJI.

Conventional approaches to PJI detection have limitations, as even if bacteria are detected, it may be difficult to confirm they are the cause of the patient’s symptoms. Novel “omics” approaches to investigate human characteristics (such as described in the article) and microbial characteristics (the topic of other work by Dr. Patel and her team) during infection, provide a new approach to simultaneously assess immune response to the organism causing the infection and identify it.

Dr. Patel and coauthors acknowledge some limitations of their exploratory study, including the relatively small number of patients, resulting in an inability to perform comparisons across some patient subgroups.

The researchers conclude, “additional investigation in larger and more robust cohorts is needed to confirm these findings and establish potential cutoff values for future diagnostic testing.”