Researchers at Harvard T.H. Chan School of Public Health and the University of North Carolina at Chapel Hill propose TWO-SIGMA-G, a competitive gene set test for scRNA-seq data. TWO-SIGMA-G uses a mixed-effects regression model based on their previously published TWO-SIGMA to test for differential expression at the gene-level. This regression-based model provides flexibility and rigor at the gene-level in (1) handling complex experimental designs, (2) accounting for the correlation between biological replicates and (3) accommodating the distribution of scRNA-seq data to improve statistical inference. Moreover, TWO-SIGMA-G uses a novel approach to adjust for inter-gene-correlation (IGC) at the set-level to control the set-level false positive rate. Simulations demonstrate that TWO-SIGMA-G preserves type-I error and increases power in the presence of IGC compared with other methods. Application to two datasets identified HIV-associated interferon pathways in xenograft mice and pathways associated with Alzheimer’s disease progression in humans. 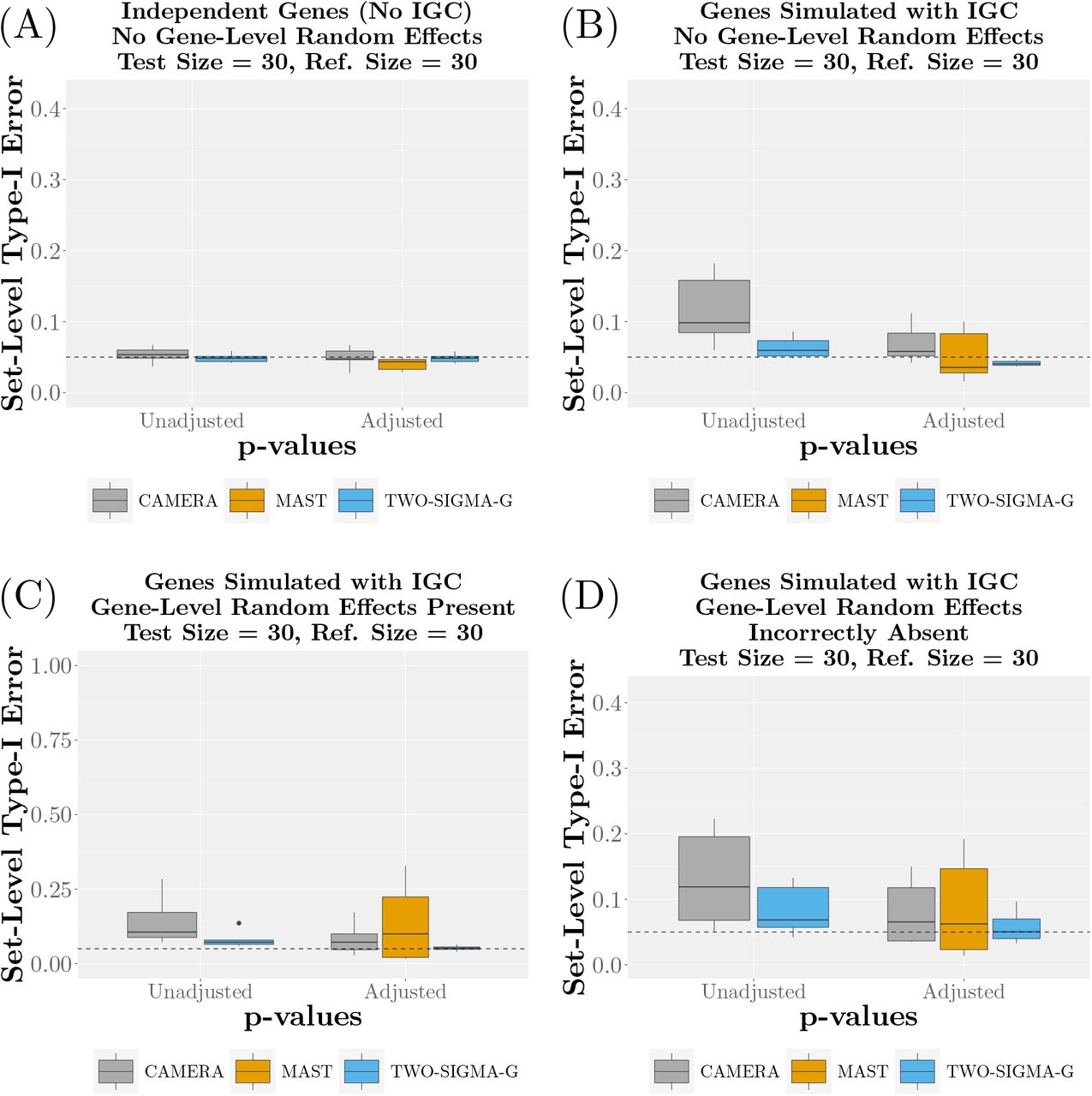 Each panel varies the existence of IGC between genes in the test set and the presence of gene-level random effect terms in the gene-level model (CAMERA never includes gene-level random effect terms). Within each panel, both unadjusted and adjusted set-level p-values are plotted (unadjusted p-values are unavailable for MAST). Each boxplot aggregates six different settings which vary both the magnitude of the average inter-gene correlation (where applicable) in the test set and the nature of the correlation structure via the introduction of other individual-level covariates. Such settings are intended to represent the diversity seen in real data sets to paint an accurate picture of testing properties over a wide range of gene sets. Each of the six settings is further composed of 10 replicates which vary only random seed to mimic the impact of a different starting pool of cells from which genes were simulated. See the Methods section for more details regarding the simulation procedure.

Availability – TWO-SIGMA-G is implemented in the function twosigmag in the twosigma R package, which is freely available on GitHub at https://github.com/edvanburen/twosigma.