Two teams working independently of each other have found that it is possible to tease out gene expression patterns in tumor-infiltrating lymphocytes using single-cell RNA sequencing. The first team, based in Australia, sequenced lymphocytes that had infiltrated breast cancer tumors. The second team, based in China, did the same with lymphocytes that had infiltrated lung cancer tumors and surrounding tissue. Both teams describe their findings and results in the journal Nature Medicine.

Lymphocytes are a kind of leukocyte (white blood cell) that tend to exist mostly in the lymphatic system. One particular type is the T cell, which is well known to play a major role in the immune response to foreign material. Cancerous tumors are considered by the immune system to be foreign material, and thus are targeted by T cells and other lymphocytes. Unfortunately, such targeted attacks are not enough to stop many tumors from growing or spreading. In these new efforts, both teams sought to gain a better perspective on which types of immune responses tend to meet with greater success than others. To find out, they conducted single-cell RNA sequencing on lymphocytes involved in such a response—those that had infiltrated tumors.

The team working in Australia focused their study on lymphocytes involved in attacking breast cancer tumors. To that end, they sequenced 6,311 T cells from two major types of breast cancer tumors. Both types of cancer had previously been designated as triple-negative, due to their particular characteristics.

The team in China studied lymphocytes that had infiltrated lung cancer tumors. They sequenced 12,346 single T cells from tumors and from nearby tissue. In their case, the tumors represented 14 distinct types. They also sequenced 8,038 alpha and beta T cell receptors.

In both studies, the researchers report that they were able to tease out gene expression patterns. The team in Australia, for example, found that both the quantity and quality of infiltrating T cells can have an impact on the outcome of tumor progression. And the team in China found they were able to track migratory effector T cell clones that actually differed from one tissue to the next. 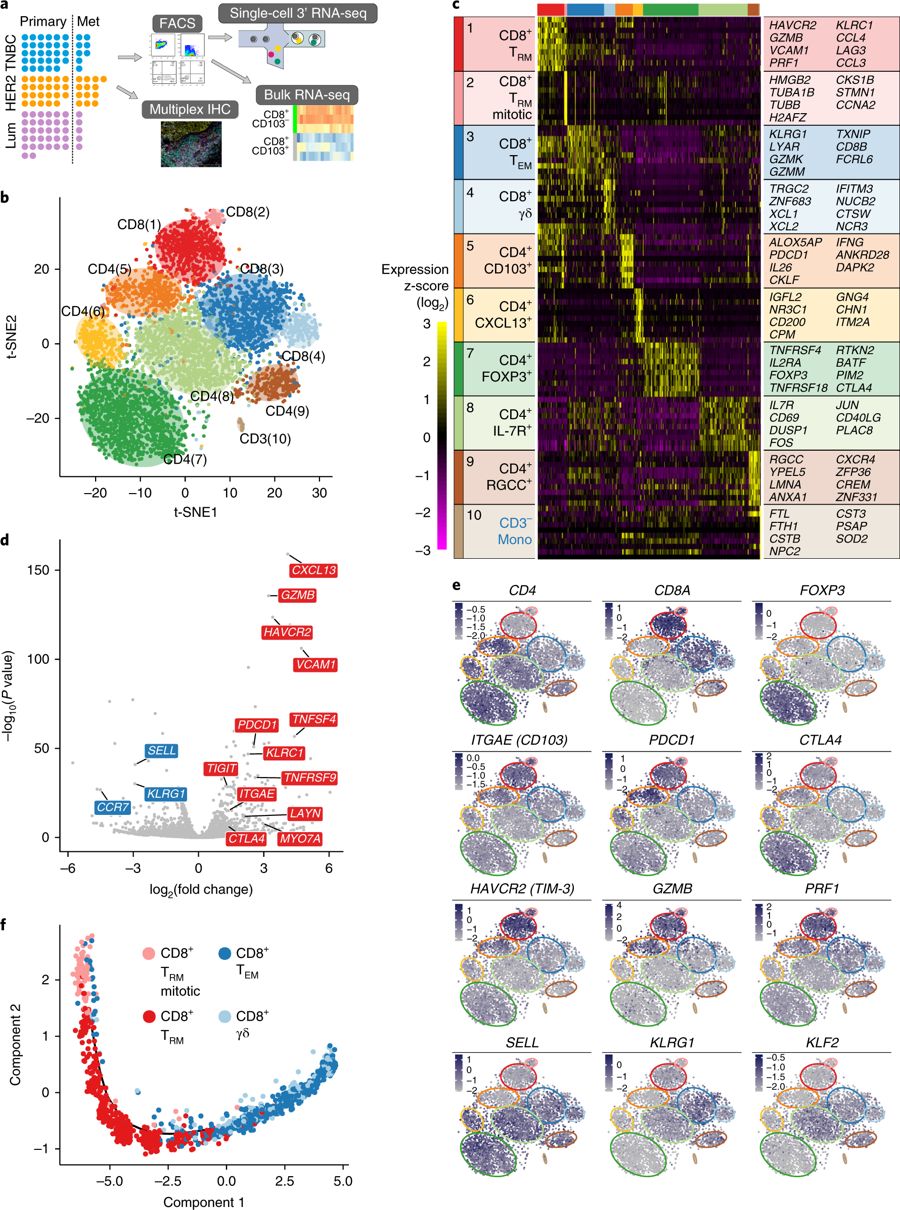 a, Workflow of both single-cell and bulk RNA-seq of human isolated T cells. b, t-SNE plot with clusters demarcated by colors demonstrating ten distinct clusters based on gene expression differences for 5,759 cells passing quality control. The numbers in parentheses correspond to the clusters listed in c. c, Heat map from single-cell analysis via expression recovery (SAVER) imputed data with cells grouped into clusters (indicated by colored bars at the top). The top ten genes differentially expressed for each cluster are shown on the y axis, and key genes are also shown for each cluster. d, Volcano plot showing key differentially expressed genes between CD8+ TRM-like (n = 685 cells across both cases) and TEM-like clusters (n = 953 cells across both cases). P values were derived using DECENT which employs a likelihood-ratio test. Unadjusted P values are shown. TRM genes are shown in red, and TEM genes are shown in blue. e, Feature plots demonstrating expression of key genes in the 5,759 cells. Color scale represents SAVER imputed gene expression value (log10 scale) for each cell for a given gene. f, 2-D representation of n = 2,005 cells in CD8+ clusters (indicated with colored circles) in single-cell data using the Monocle 2 algorithm.

Both teams suggest that their work shows the potential benefits of understanding single-cell genomics of the tumor microenvironment—the possibility of developing new immunotherapy drugs and techniques.