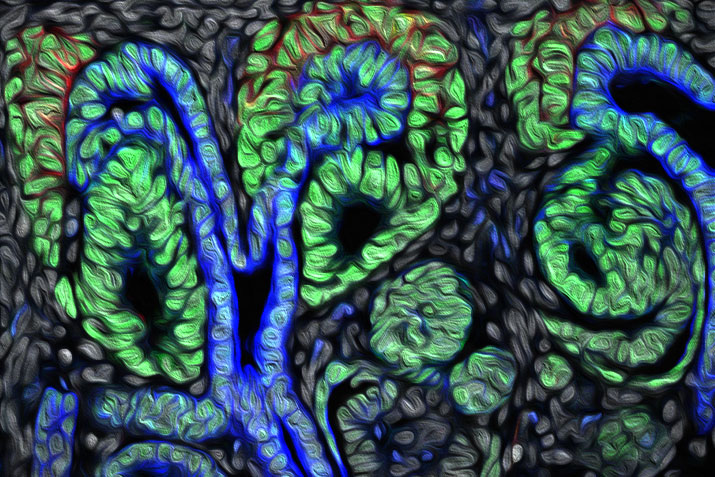 Arriving early or late can have big consequences for early-stage cells that gather to form a new kidney, a team of USC researchers discovered.

The scientists showed how progenitor cells that form the kidney’s filtering units, called nephrons, mature into entirely different types of cells based on when they reach the scene of nephron formation. The results appear Monday in Developmental Cell.

The discovery advances understanding of how to assemble building blocks to fashion kidney tissue. Intimate knowledge of kidney cells helps advance drug development and treatment, fabricate kidney components and, ultimately, build new organs. About one in seven adults in the United States — or 30 million people — suffer a chronic kidney disease, according to the U.S. Centers for Disease Control and Prevention.

“By studying normal human nephron development, we’re gaining important information about how to replicate this intricate process in the laboratory,” said Andy McMahon, director of the Eli and Edythe Broad Center for Regenerative Medicine at USC and Stem Cell Research at USC. “The hope is that laboratory-grown nephrons can be used to further study the process of development, screen potential therapies to treat disease and eventually provide the building blocks to assemble functional kidneys for transplantation into patients.”

Build a kidney: What’s the blueprint?

McMahon led a team of researchers building a blueprint of how the parts fit together and work. The team discovered that timing is critical as the precise arrival of progenitor cells dictates their form and function in the kidney.

Specifically, it takes about 1 million nephrons to form a human kidney. The scientists observed that every time one of these structures forms, the nephron progenitor cells (NPCs) gradually commit to becoming various mature cell types and joining the developing nephron. NPCs that arrive early within the nephron start to differentiate and become the “tubule,” which controls the reabsorption of important compounds back into the blood and carries urine away. NPCs that occur late develop into the “glomerulus,” the structure that filters the blood.

“Timing is critical in determining the type of mature cell that each progenitor will become,” said Nils O. Lindstrom, a principal author of the study and a researcher at the stem cell research center, which is part of the Keck School of Medicine of USC.

To show that their predictions were accurate, Lindstrom and colleagues used genetically labeled NPCs in mouse kidneys and grew these under a microscope while capturing images with time-lapse imaging. This allowed them to demonstrate how NPCs gradually move into the newly forming nephron and turn on genes that are specific to particular cell types.

Working with scientists in the Molecular and Computational Biology unit at the USC Dornsife College of Letters, Arts and Sciences, the scientists developed new techniques to analyze and interpret what is known as “single-cell RNA sequencing data.” Single-cell RNA sequencing is a novel technique that allows scientists to break apart whole tissues and organs and observe gene activity in every cell. Using this approach, the team documented how NPCs turn into intermediate cell types with specific gene activity, which identifies them as the precursors to particular mature cell types.

To achieve the full diversity of cell types in the nephron, when attempting to grow kidneys in lab settings, scientists need to understand how these precursor cell types form under normal circumstances in the body. Single-cell RNA sequencing provides a view of all the genes and genetic pathways that are activated when specific cell types form in the nephron.

Kidney failure is a leading cause of death for people in the United States. About 662,000 people live on chronic dialysis or with a kidney transplant. Men are 64 percent more likely than women to suffer end-stage renal disease and the risk for African-Americans is four times higher compared to whites, according to the CDC and the American Kidney Fund.