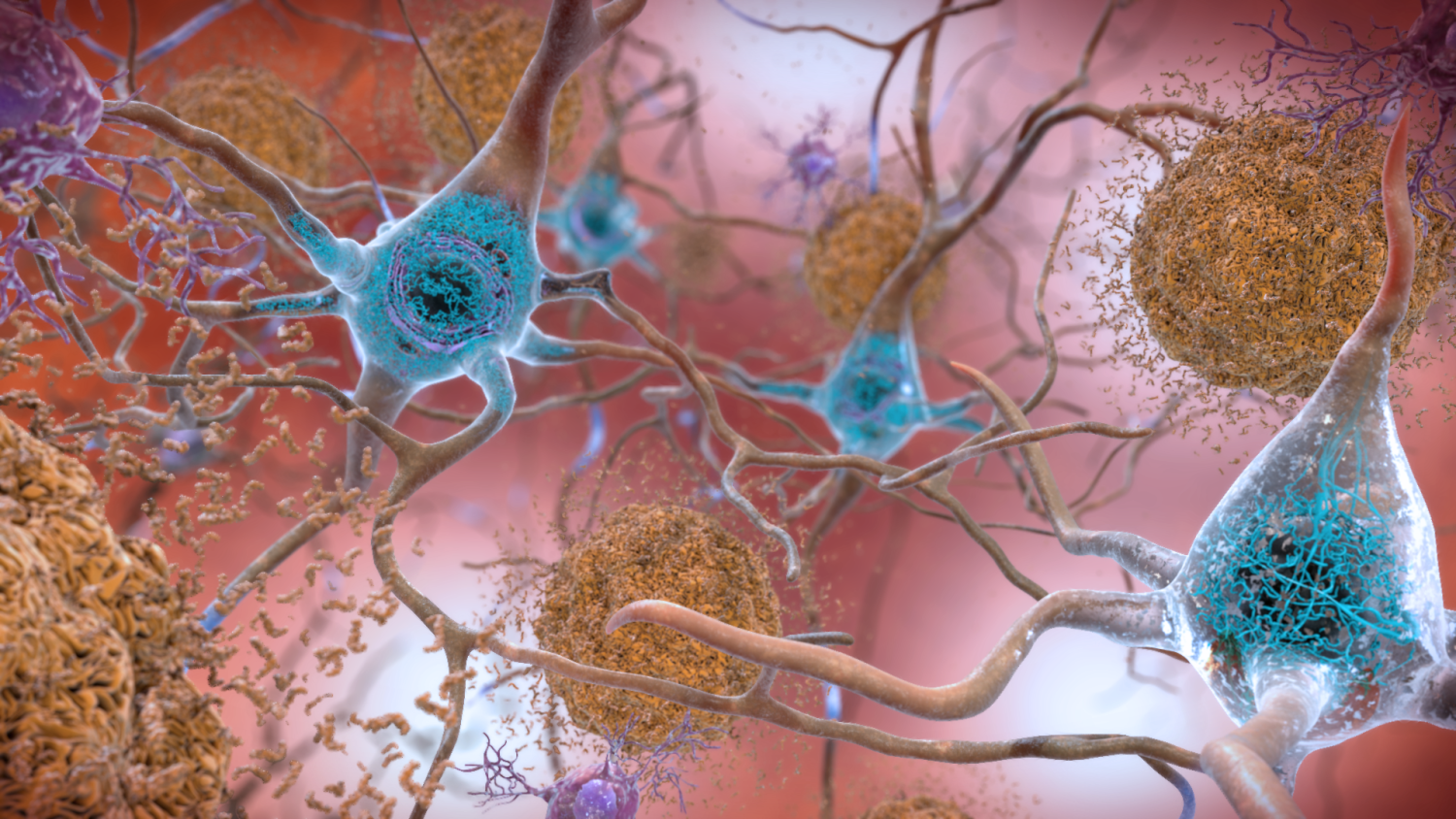 Look deep inside the brain of someone with Alzheimer’s disease, most forms of dementia or the concussion-related syndrome known as chronic traumatic encephalopathy (CTE) and you’ll find a common suspected culprit: stringy, hairball-like tangles of a protein called tau.

Such conditions, collectively known as “tauopathies” strike scores of people across the globe, with Alzheimer’s alone affecting six million people in the United States.

But more than a century after German psychiatrist Alois Alzheimer discovered tau tangles, scientists still have much to learn about them.

A University of Colorado Boulder study shows for the first time that tau aggregates gobble up RNA, or ribonucleic acid, inside cells and interfere with an integral mechanism called splicing, by which cells ultimately produce needed proteins.

“Understanding how tau leads to neurodegeneration is the crux of not just understanding Alzheimer’s disease but also multiple other neurological diseases,” said senior author Roy Parker, a professor of biochemistry and director of the BioFrontiers Institute at CU Boulder. “If we can understand what it does and how it goes bad in disease we can develop new therapies for conditions that now are largely untreatable.”

The study was led by Evan Lester, an M.D./PhD candidate in the Medical Scientist Training Program, which enables students to simultaneously work toward a medical degree from the University of Colorado Anschutz Medical Campus and a PhD from CU Boulder.

For part of his medical training, Lester worked alongside doctors and patients at the CU Alzheimer’s and Cognition Center in Aurora, seeing up close how critically more research is needed.

“There is nothing we can do for these patients right now – no disease modifying-treatments for Alzheimer’s or most of the other tauopathies,” Lester said, noting that 70% of neurodegenerative diseases are believed to be at least partially related to tau aggregates. 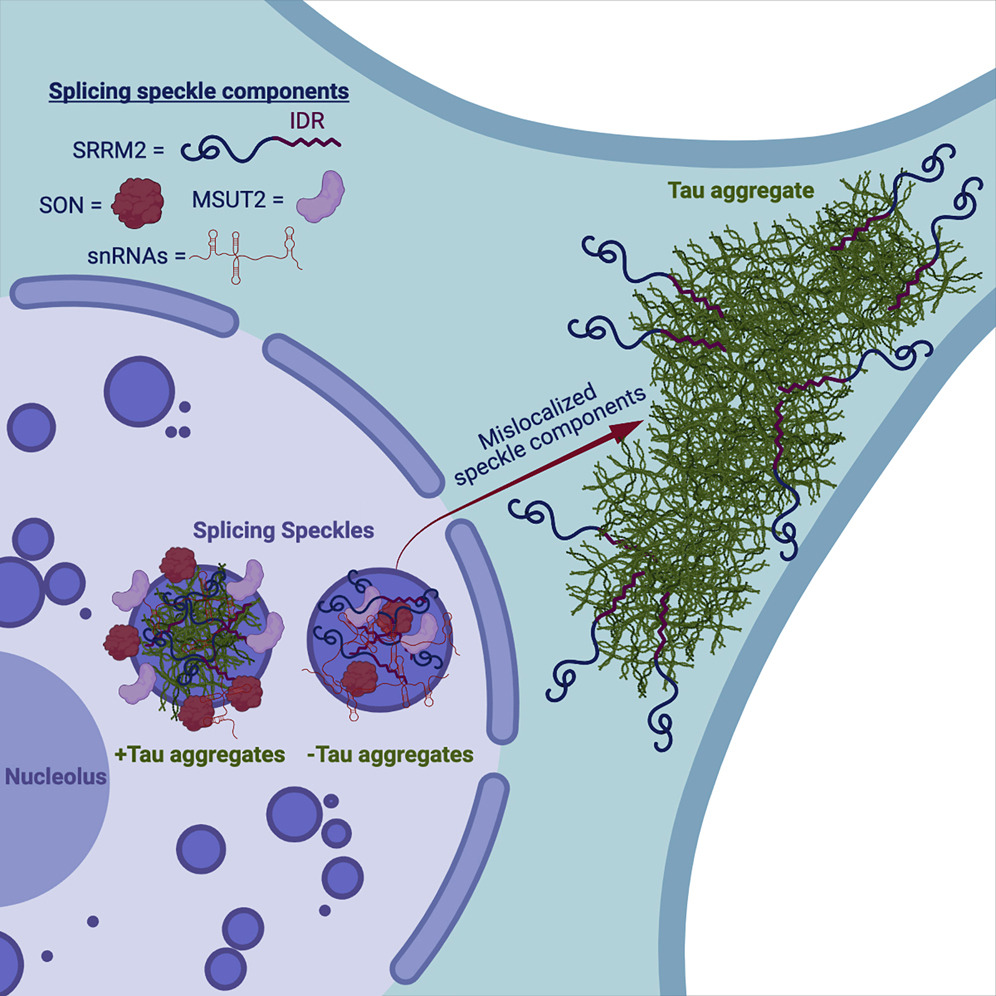 For the study, the researchers isolated tau aggregates from cell lines and from the brains of mice with an Alzheimer’s-like condition. Then they used genetic sequencing techniques to determine what was inside.

They confirmed for the first time that tau aggregates contain RNA, or ribonucleic acid, a single-stranded molecule key for synthesizing proteins in cells. They identified what kind of RNA it is, specifically snRNA, or small nuclear RNA, and snoRNA, or small nucleolar RNA.

They also discovered that tau interacts with pieces of cellular machinery known as nuclear speckles, sequestering and displacing proteins inside them and disrupting a process called RNA splicing in which the cell weeds out unneeded material to generate new, healthy RNA.

“The tau aggregates appear to be sequestering splicing-related RNA and proteins, disrupting their normal function and impairing the cell’s ability to make proteins,” said Lester.

Notably, scientists examining the brains of Alzheimer’s patients after death have discovered evidence of splicing-related defects in cells.

The paper is the first in a series out of Parker’s lab to explore the mechanism of action by which tau aggregates gum up the works inside brain cells.

Already, several companies have clinical trials underway testing drugs that would do away with tau entirely in patients with neurodegenerative diseases. But that could potentially have unintended consequences, said Lester.

“A big problem in the field is that no one really knows what tau does in healthy people and It likely has important functions when not in tangles,” he said.

By better understanding precisely what it does to harm and kill cells, Parker and Lester hope to bring a different approach to the table.

While it’s unlikely his current patients will benefit from his discovery, someday his future patients just might.